Mentioning Alzheimer’s disease or dementia conjures images of vacant stares, confused expressions and heartbroken family and friends. But that’s only if you haven’t spent some time at Memory Matters.

The Hilton Head Island-based nonprofit organization has been bringing smiles to frustrated caregivers and dementia sufferers for two decades. By tackling one of the most feared illnesses facing the elderly, the agency has also helped change public perceptions of memory loss.

This year, Memory Matters celebrates its 20th anniversary with a slew of events designed to increase awareness of dementia and what people can do to protect their brains. The group also is kicking off 2017 under new leadership: Longtime leader Edwina Hoyle is retiring and turning over the reins to new executive director Sheila Strand.

Hoyle led the organization’s evolution into a nationally recognized safe haven for dementia patients and their caregivers. She also had a lot of fun along the way.

“People expect a nursing home environment when they come in, but it’s not,” Hoyle says. “It’s engaging; it’s fun. There’s lots of laughter.”

When Hoyle moved from Massachusetts to Hilton Head in 2005, services for dementia sufferers and their caregivers were hard to find. For eight years, Alzheimer’s Respite and Resource shuffled from church to church, offering half-day care for those with dementia and providing caregiver support one day a week at the public library or other spaces.

“When we were operating in churches, it was really difficult for people to find us,” Hoyle says. “… I jokingly referred to us as a band of roving gypsies back then.”

Under her guidance, the organization sought a permanent location. It launched a fundraising campaign, and in 2008, it moved into its current 7,000-square-foot location at 117 William Hilton Parkway. Along with the new locale, it changed its name to Memory Matters to reflect an expanded, more proactive approach to fighting dementia.

With the new location and direction, Memory Matters could provide care five days a week from 10 a.m. to 3 p.m.

Participants sing, create art, play games and perform other activities to keep their minds engaged. Five dementia-care therapists are on staff, and 70 or so volunteers pitch in to run the day care. The center not only helps those with dementia, but gives family and friends a much-needed break from the stress and frustration of providing care at home. Caregivers also get emotional help and encouragement from support groups and counselors throughout the week.

Under Hoyle’s leadership, Memory Matters reached out to the community with new programs to raise awareness.

In 2006, Memory Matters started Brain Boosters, a 10-week program for people who are seeing small changes in their memories and want to know how to improve it.  Two years ago, the Connections program was started to help those diagnosed with mild or early-stage dementia.

“We can’t cure dementia or Alzheimer’s, but we can certainly teach you how to manage it in a very positive way,” Hoyle says. “And that’s far different from becoming isolated and afraid and not having a place to share your concerns.”

In 2015, Memory Matters began the Purple Angel program to teach businesses how to treat customers with dementia. So far, 70 local organizations with a combined 1,400 employees have been trained.

“We are one of the first communities in the United States to do this,” Hoyle says. “What we are aiming for is to raise awareness about what dementia looks like and how to positively respond to it.”

In true Memory Matters fashion, the organization plans to celebrate its 20th anniversary with events to raise awareness of dementia and promote brain health.

The festivities begin Jan. 12 with Memory Fest from 1 to 4 p.m. at Hilton Head Beach & Tennis Resort. Cathee Stegall, a dementia care specialist with Memory Matters, will give a presentation on maintaining a healthy brain, and local vendors will be on hand offering a variety of health services.

Hoyle, whose last day at Memory Matters is Feb. 28, hopes the community will come out to Memory Fest and participate in the organization’s other events and programs.

She knows that others will be pleasantly surprised by what they find.

“People think that since you work in a dementia care facility that it’s got to be depressing and it’s got to be very sad,” she says. “But it is the best place in the world to work, because there is not a day that goes by where you don’t have a caregiver or one of the clients saying thank you.”

For more information on Memory Matters or the events scheduled to mark its 20th anniversary, call 843-842-6688 or go to www.memory-matters.org. 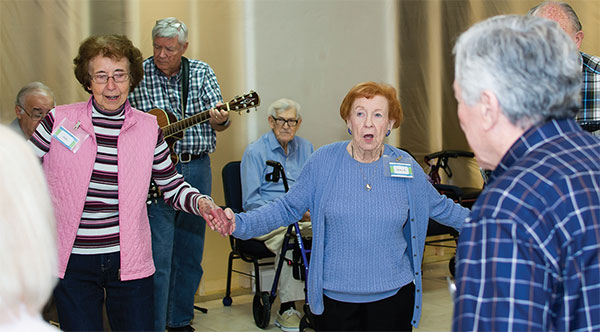 Memory Matters is holding several events throughout 2017 to mark its 20th anniversary: