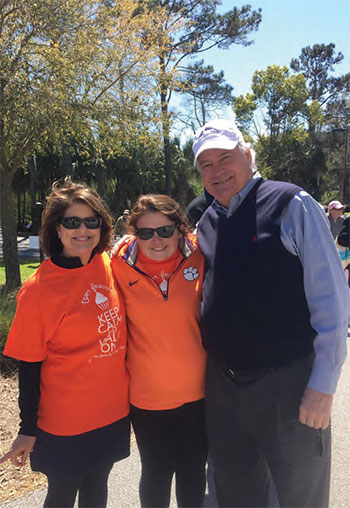 The recent groundbreaking ceremonies for the Medical University of South Carolina’s new Shawn Jenkins Children’s Hospital were emotional for Elizabeth Hancock. The Hilton Head Island attorney, philanthropist, wife and mother finally took some time to reflect on her contribution to the facility and its evolution. But “this milestone has so little to do with me,” Hancock says. She credits the dedicated group of women who supported her as she led the volunteer group Friends of the Children to raise awareness and money for the MUSC Children’s Hospital over the past 16 years.

“When I first became a Hilton Head parent, there were many of us island moms who had kids with extraordinary health issues,” she says. “We often felt alone as we faced health care obstacles and the unknowns of complex diseases. So we depended on each other for support and solutions.”

Hancock’s journey with her daughter’s diabetes began unexpectedly when 5-year-old Sarah became increasingly thirsty and exhausted on a regular basis. Hancock associated Sarah’s behavior with normal “growing-up” issues — until the symptoms intensified during a family trip to Washington, D.C. “She became drenched with sweat, then began having dry heaves and she couldn’t walk,” Hancock says.

She and husband Bobby rushed Sarah to Columbia, where she was officially diagnosed with Type 1 diabetes. They were directed to Dr. Lyndon Key, who led the pediatric endocrinology team at MUSC in Charleston. In order to balance her insulin and sugar levels, Sarah stayed a full week under Dr. Key’s care, befriending many other young patients as she recovered. When it was time to leave, Sarah wanted to stay “just one more day” so she could share the numerous gifts she had accumulated with her floor mates. “We stopped by lots of patients’ rooms to deliver our favorite Disney videos,” Hancock says.

The Hancock’s ongoing gratitude and generosity wasn’t lost on the MUSC staff. Charles P. Darby, former chairman of pediatrics and founder of the Charles P. Darby Research Institute, befriended Hancock and invited her join the MUSC Children’s Hospital Fund board. It wasn’t long before the newest board member had assembled her inaugural Friends of the Children committee. “The idea to unite Hilton Head moms in support of MUSC bloomed during a beach walk with a dear friend who shared my passion for children’s health care,” Hancock says. “We were determined to be more than just another women’s auxiliary board.”

Monthly and quarterly Friends of the Children lunch meetings acquainted local moms with MUSC physicians, allowing guests to inquire about health topics ranging from ADD and adolescence to cancer and kidney disease. Hancock remembers empathetic tears and sighs of relief at many of the luncheons held at the South Carolina Yacht Club. “These reactions reaffirmed our mission to raise awareness for local parents who were in search of better health care solutions for their children,” Hancock says.

The regular speaker forums and other efforts — including sponsored annual tennis tournaments and celebrity fashion shows — generated not only heightened awareness but significant money as well.

“The group has raised approximately $265,390 since its inception,” says Heather Woolwine, director of public affairs and media relations at MUSC. Woolwine says that Friends of the Children contributions have covered a number of priorities within the Children’s Hospital. Initially, the group supported the campaign for the Darby Children’s Research Institute, which has attracted some of the country’s top pediatric physicians to the MUSC Children’s Hospital.

Other fundraising efforts by Hancock and fellow volunteer moms benefitted the expansion of the nephrology team and matching funds for The Sherman Financial Group Endowed Chair for Children’s Research. “What is so wonderful about this group is the dedication its members have exhibited by building awareness for MUSC’s current children’s hospital through 16 years of continuous giving, and now the campaign for the MUSC Shawn Jenkins Children’s Hospital,” Woolwine says.

Hancock says that monetary contributions to Friends of the Children have been enhanced by other dimensions of giving. “When we weren’t fundraising, we were literally going the distance for children and families in need of urgent care,” she says, reflecting on an impromptu trip to MUSC when an island high school coach reached out for help. “One of her athletes needed immediate attention and as always, the Children’s Hospital opened its doors when we arrived, regardless of health insurance eligibility.”

Friends of the Children has retired its crusade as construction of the new Children’s Hospital gets underway. Hancock says she misses the weekly phone calls she used to receive from Lowcountry parents, inquiring about doctors or treatments at MUSC. Yet she’s content to focus on her family’s needs. Sarah, now in her final year at Clemson University, has survived spinal disorders scoliosis and Klippel-Feil Syndrome, in addition to diabetes. A reflection of her mom’s strength and courage, she’s studying to become nurse.