Russ Brown, a resident of Hilton Head Island since 1974 and president and CEO of RBC Enterprises, lost his 27-month fight with acute myeloid leukemia on August 12, 2014.

Shortly after his diagnosis, Brown became determined to start a foundation to help beat this disease that greatly impacts so many lives.  Unfortunately, Brown wasn’t able to see his final wish come to life — but others have stepped in to help.

To honor this wish and pick up the fight where Brown left off, his family — wife Dottie Brown, daughters Elizabeth Brown and Lindsey Harrell, and son-in-law Wade Harrell — has launched For The Win, The Russ Brown Foundation to end Myelogenous Lukemia, a 501(c)(3) organization. 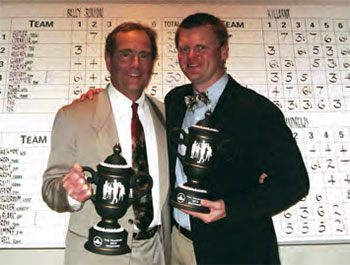 For The Win will support the fight against myelogenous leukemia, raising money to advance research and continually improve survival rates for patients around the world until that day when this life-threatening disease is eradicated. At the launch of the organization, For The Win’s sole beneficiary will be MD Anderson’s Dr. Guillermo Garcia-Manero, one of the last doctors to treat Brown, and the research being conducted by his team at the largest practice of leukemia experts in the world.

“Russ was not your typical cancer patient,” said Dottie Brown, president of For The Win.  “Even throughout a bone marrow transplant, full body radiation and countless rounds of chemotherapy, Russ was determined to live an active life.  He maintained his normal exercise routine, even going down to the hospital’s gym after being unhooked from chemo. He continued to hit the golf course and played in and won our club’s annual Traditions golf tournament with our son-in-law. And most importantly, he sustained his positive attitude, even offering pep talks to those around him. One of Russ’ favorite nurses once said, ‘He was truly a Superman, one of the strongest patients I’ve ever met.’ We felt it was important to turn our grief into something positive — helping to put an end to the disease that has changed our lives in so many ways.”

For The Win will raise funds through direct donations, merchandise sales and special events held annually to celebrate some of the things Brown truly loved — golf, oysters, fitness, etc. For more information, go to www.forthewinfoundation.org.

For The Win’s first fundraising event, Shuckin’ For The Win, will be Saturday, Oct. 15, in Williamsburg, Virginia, to coincide with the College of William & Mary’s Homecoming. A second event, the Swinging For The Win golf tournament, is planned for spring 2017 on Hilton Head Island.