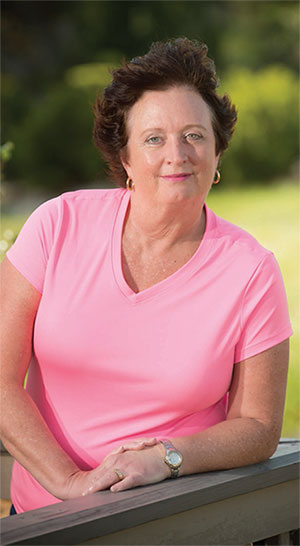 WHEN TEAM HAPPY FEET SETS OFF AT THIS YEAR’S LOCO MOTION, THEY’LL HAVE PLENTY TO BE HAPPY ABOUT.

Carolyn Neely is smiling. She is ordering lunch at Bluffton’s Corner Perk, the late summer heat ruling out a coffee and casting pearls of condensation on her water glass. Along May River Road, cars are rumbling along. And Carolyn Neely is happy.

Happy because she can call herself a survivor, smiling because she knows all too well how much the deck was stacked against her.

Family history is one of the leading indicators of cancer, and Neely has lost two loved ones to the disease. Her mother had been diagnosed with colon cancer, a form with a direct genetic link to a predilection for breast cancer. This cruel disease reared its head again when her sister Karen was diagnosed with aggressive breast cancer at age 31. By 39, she was gone.

A family history that tragic may have placed Neely in harm’s way, but it also gave her a vigilance that may have saved her life.

“When that many people in your family are diagnosed, they start looking down the line. I started getting regular mammograms, but I never thought it would happen to me,” she said.

In January 2013, it happened. A routine mammogram turned up a concerning 2-centimeter-wide spot that consultations with a radiologist, an ultrasound and finally a needle biopsy confirmed as stage 1 invasive ductal carcinoma.

She was referred to Hilton Head Hospital’s Breast Health Center and found an astounding support group.

“They made me feel really comfortable. They said, ‘We’ll be alongside you your whole journey,’” Neely said. “They also guided me. Dr. (Virginia) Hermann told me, “I don’t want you on a bunch of websites. You go to exactly two: The Susan G. Komen Foundation and the American Cancer Society.’”

Thinking back on her sister, and what she went through, Neely was determined to fight this thing head on, and amazingly it was her doctors who talked her down.

“I said, ‘Let’s do the mastectomy. Take if off, I don’t care,’” Neely said. But Dr. Hermann insisted that based on what she was seeing, a lumpectomy would be the best course of action. One outpatient procedure later, along with careful study of lymph nodes and 32 radiation treatments, and Neely was declared cancer-free.

She’ll still need to carefully manage and monitor certain hormone markers for the next five years or so, but for today, Carolyn Neely is a survivor.

And that gives her plenty to be happy about; an enthusiasm that can be found in her LoCo Motion team, Happy Feet.

“I first did the LoCo Motion in 2013. I had just finished treatments May 1, and I did it that September,” Neely said. “This year, I have a whole team. Ten people, two of my sisters, I’m really excited to participate this year. We’re doing all three islands — 30 miles.”

It’s a happiness that comes with having lived through one of the most terrifying diagnoses there is. And it’s a happiness tempered with bittersweet memories of the mother and sister in whose honor she walks.

“When I get to a point where I just can’t walk another step, I think of them,” Neely said. “I think of my sister, how much pain she went through… that really drives me to continue.”