In his best-selling book “Being Mortal: Medicine and What Matters in the End,” Atul Gawande tells a story about a maverick geriatric doctor, Bill Thomas, who takes a job in a New York nursing home and decides to combat what he calls the three plagues: hopelessness, helplessness, and boredom.

Breaking all the rules, Thomas brings in dogs and cats and 100 parakeets and gives the animals and birds to residents, telling them to take care of them as their own. 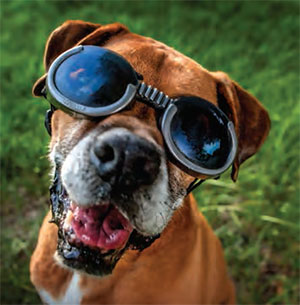 “Treating them as if they were capable of caring for something — not just passive wards of the caregivers — was dramatically transformative. People came out of their shells. Some of the catatonic residents started to talk again. Psychotropic drug prescriptions for agitation dropped sharply. The residents not only found a new purpose and became more active, they also lived longer,” Gawande wrote.

A Brush with Death and Bond Made in Heaven

Ginn and his boxer, Romeo, are survivors.

Three years ago, someone found Romeo tied to a tree, left to die. That same year, Ginn went through a divorce and flat-lined twice after suffering a rare infection of flesh-eating bacteria.

The bacterium causing Ginn’s infection, necrotizing fasciitis, replicates quickly, secreting toxins that destroy skin, fat and muscle. When gangrene sets in, the dead tissue must be surgically removed to save the person's life or limb.

A team of surgeons at the Medical University of South Carolina operated on Ginn nine times over four days, removing nine pounds of infected flesh from his upper arm. He endured months of painful rehabilitation. 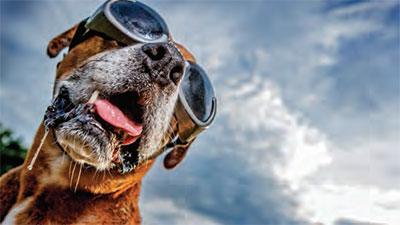 Romeo also was suffering. The dog required more than two years of intense therapy from Hilton Head’s Noah’s Arks Rescue for the trauma he endured.

Last year, when Ginn met Romeo for the second time, the dog bit him. That would’ve discouraged most people from adopting the dog. Not Ginn.

“I corned Romeo with a leash and took him for a walk before taking him home,” said Ginn. “When we got home, we had a few drinks, smoked a few cigars, and told each other what we wanted out of life. We’ve gone from there. Romeo had a tough life but we’re here together now.”

Today, Ginn and Romeo go everywhere together — to the office, the bank and outdoor restaurants where Romeo becomes the center of attention.

“It’s amazing how much attention he gets,” Ginn said. “People get out of their chairs to offer him a treat or fresh water. The outpouring of love he gives back is pure, pure love. He brings people so much happiness.”

Pets can create opportunities to socialize. They also offer the health benefit of humor.

“Romeo loves wearing a pair of goggles to protect his eyes when he sticks his head out the car window,” Ginn said. “He takes them off when the car ride is over. Now he knows how to put the window down. A friend told me to put on the child locks, but it’s too cute.”

Ginn and Romeo get up at 4 a.m. and walk three to six miles every day. A dog’s need for regular exercise is a great motivation to get their owners up and walking.

“The dog is flawless: he French kisses, has a great ass, never complains and always loves to be with me,” said Ginn.

“I’m the same person I was before my brush with death — I have the same demeanor — but I think completely differently,” Ginn said. “I respect how precious life is, so I always leave people with ‘I love you, man — mean it!’ ”

Ginn said it seems Romeo also has a positive outlook on life, even after enduring such pain and suffering. “The dog is flawless … he never complains and always loves to be with me.”

“The unconditional love is the incredible thing about dogs,” said island visitor Heather Perram Frank. “They don't judge you; they accept you as you are and they are always glad to see you. To care for them and give them good lives is such an honor. The trust they place in us is sacred.” 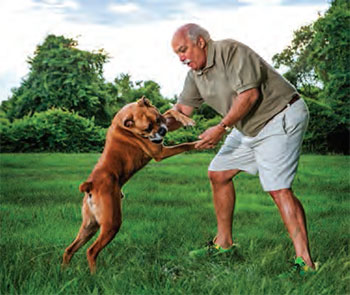 Frank, the former editor in chief of USA Today’s USA Weekend, and her husband, Justy, a physician, have three dogs, all Portuguese Water Dogs: two girls ages 12 and 9, and a boy who's 18 months old.

“The girls love their brother, but they're ladies of a certain age and they like their rest. They like to cuddle and snooze and stretch, which is a nice day to wake up. Our boy plays hard and sleeps later than they do, but he wakes up full of excitement and wonder every single day. His joy and pleasure in just being alive give every morning a terrific start. I can honestly say that we start every day, even difficult ones, grounded and grateful because of these sweet creatures,” Frank said.

A number of American Heart Association studies show a link between pet ownership and improved cardiovascular health, including lower blood pressure and heart rates, even under stressful circumstances. Being with a beloved pet lowers the owner’s stress hormone cortisol.

“Their needs and their routines give shape and discipline to even hectic days, making them feel ‘normal.’ Having dogs is a special, active kind of company. They're content just to be with you,” Frank said.

Loving and caring for another living being also promotes the release of oxytocin, a neurochemical that enhances bonding.

“Our dogs are extensions of the love Justy and I have for each other. Our home is kinder, warmer, sillier place because of our dogs. They magnify our happiness and the responsibility we gladly shoulder for each other's well-being.”