THE STATE’S OFFICIAL FOOD IS THE PERFECT SOUTHERN CUISINE

Grits are the official state food of South Carolina. “A man full of [grits] is a man of peace,” the General Assembly declared in 1976. They continue to be a mainstay in Lowcountry home kitchens and restaurants.

Grits are made from either yellow or white ground corn, typically from less sweet, starchy varieties often referred to as “dent corn.” Historically, grits were served as breakfast food, but the reputation of the classic shrimp and grits has shifted it more toward a main course.

The secret ingredient to making the best grits, both home cooks and professional chefs agree, is a healthy dose of patience.

If you are not already a grits purist, stone-ground grits are the ones to prepare for the true experience, as this variety is the least processed, has a prominent texture and retains the most corn flavor.

“Quick” and “regular” grits are finely ground, which allows for less cooking time and have a longer shelf life. However, the nutritional value is impacted due to this processing.

The “instant” variety is processed, precooked then dehydrated, which takes out any art in the cooking process – by the mere act of adding hot water, they are ready for consumption and what purists would simply call disappointment.

However, grits made with water are lower in calories and fat; plain grits seem to cry out for milk, butter, spices, herbs and shrimp.

The rule of thumb is that any variety that is not whole grain contains less fiber, vitamins and minerals.

Grits have a versatility, unlike potatoes, rice and some other grains – anything tastes delicious on hot, buttered grits and soupier dishes with gravies and broths work especially well since they serve to keep the grits both moist and warm.

“Grits are a common thing —it’s just a breakfast food to go with anything fried,” says native islander and Gullah preservationist Louise Cohen, who hosts the annual Ol’ Fashioned Gullah Ooman Breakfast as part of the annual Gullah celebration.

Every year, visitors wait in line at the Cherry Hill Schoolhouse across from the St. James Baptist Church on Dillon Road for a homemade breakfast of hot grits, served with fried whiting, shrimp, oyster gravy and biscuits.

“Whatever kind of fish. We couldn’t be choosy about the type of fish when we were coming up - whiting, mullet, bass, whatever…if you feel like adding some gravy too, you’ve got stewed mullet and grits.”

And when asked about how long to cook her grits, she said: “I don’t know because we don’t time things.”

That response sums up the art of cooking grits. Timers are overrated when it comes to cooking grits. And a good tip about stone ground grits: keep cooking them and add more liquid, stir occasionally, until they are thoroughly cooked, typically well exceeding the package directions. 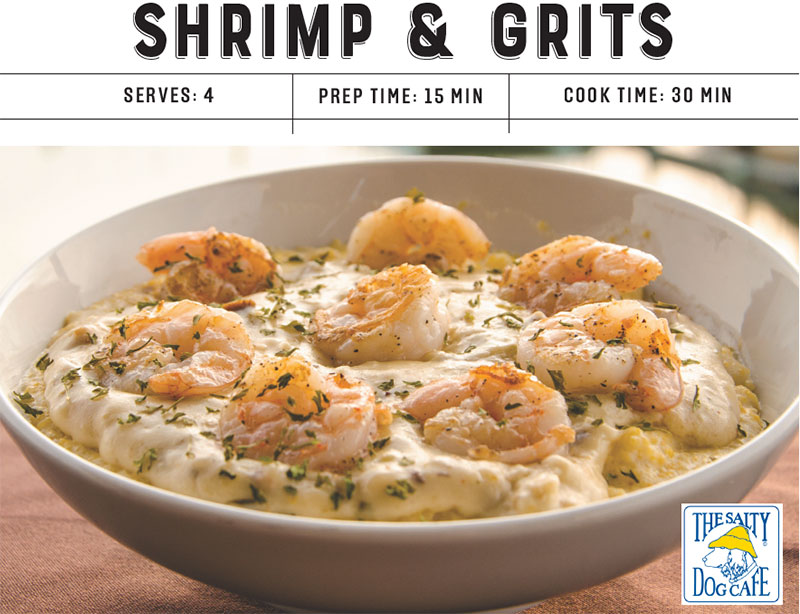 40 large shrimp, peeled and deveined.
Oil of choice for sautéeing.

Bring chicken broth, steak seasoning, cream and butter to a boil. Whisk in grits and lower the heat to a simmer. Continue cook, whisking occasionally until grits are cooked (about 30 minutes). Mix in cheese and ready to serve.

In a stock pot, sauté bacon, sausage, onion, garlic, thyme, peppers, and bay leaf until bacon is crisp. Whisk in enough flour to make a roux and cook for 2-3 minutes. Add white wine and sherry and reduce. Add cream and chicken broth. Reduce until the desired consistency. Finish by stirring in the tomato and green onions.

Serve shrimp and gravy over a bed of cheesy grits. 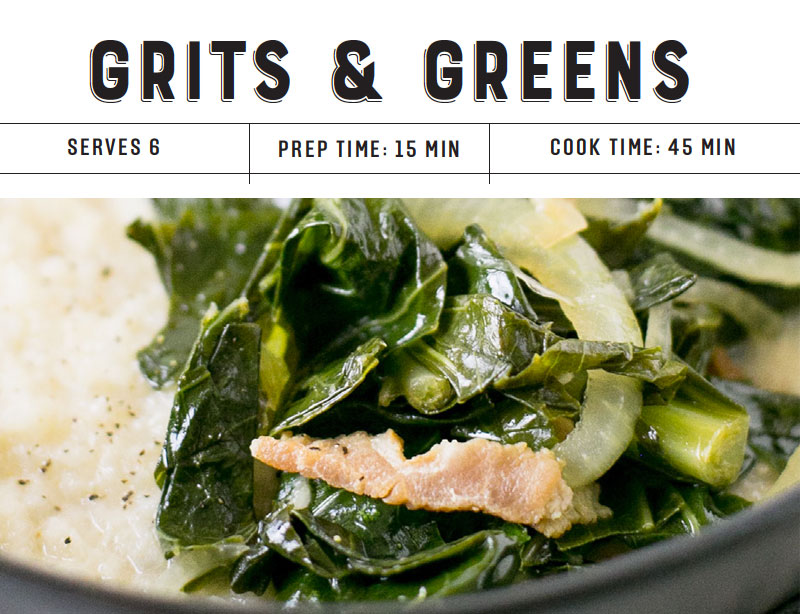 Preheat oven to 375 degrees.
Put bacon in a large pan. Cook over medium heat. Stir often until crispy. Remove bacon slices and drain on paper towels.
In pan, over medium heat, add and sauteé onion until translucent. Remove pan from heat.
In a medium pot, bring 1 cup of chicken broth to a boil.
Stir in grits, return to a boil and cover. Reduce heat to a simmer. Stir often for 20-25 minutes.
As grits cook, bring remaining cup of chicken broth to a boil in a pot. Once boiling add turnip greens and reduce heat to simmer. Cook until tender. Drain and mix in onions and bacon (chopped).
Stir cheeses, butter, salt and pepper into grits.
Plate grits first then top with greens. 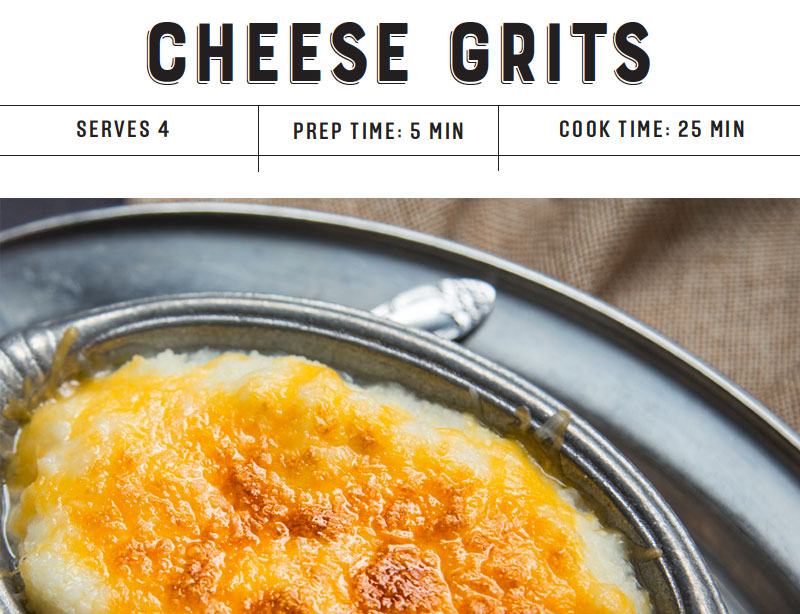 Combine water, milk, broth into a large saucepan. Bring to boil.
Once boiling, add salt.
Slowly add grits, stirring to reduce any clumping. Reduce heat to low.
Simmer and stir frequently until creamy. Cook for 20 to 25 minutes.
Remove from heat and stir in cheese until melted. Reserve some cheese for topping.
Season to taste.
Top with cheese.
Serve immediately.