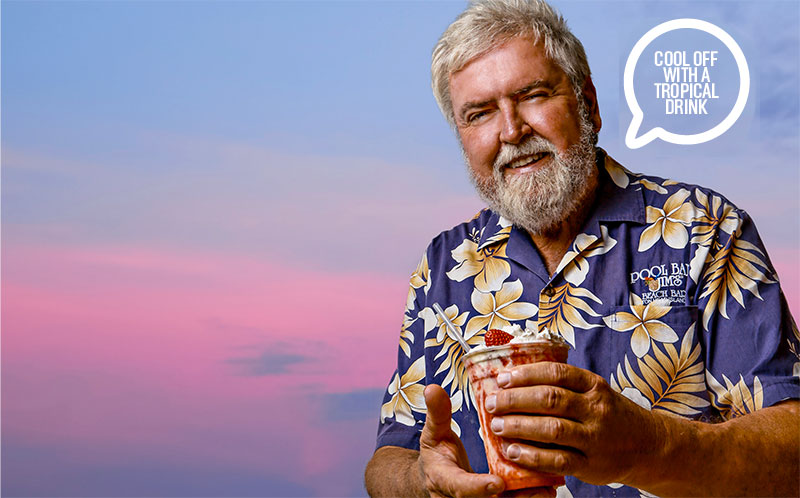 Don’t let Jim “Pool Bar Jim” Lisenby’s laid-back demeanor and permanent smile fool you: behind the ever-present Hawaiian shirt beats the heart of a businessman. It’s just that for the last 40-plus years, his business has been good times and fuzzy memories that last a lifetime.

And you’d best believe business is good. In one week this past June, 35 gallons of Lava Flow slaked the thirst of thousands of locals, and Lisenby said Pool Bar Jim’s likely sold more Painkillers than any other bar in the state.

“The island has just exploded with people. Every business is having a record year, and so are we,” said Lisenby. “The biggest thing for us is trying to hold on and make sure we can take care of this volume of business.”

It’s an interesting juxtaposition, seeing Lisenby perched on a stool of the bar that has borne his name since 2017, with people splashing in the Sea Crest pool just beyond, calypso playing on the speakers and a gentle breeze coming off the dunes, while hearing him talk about volume, profit and staffing. 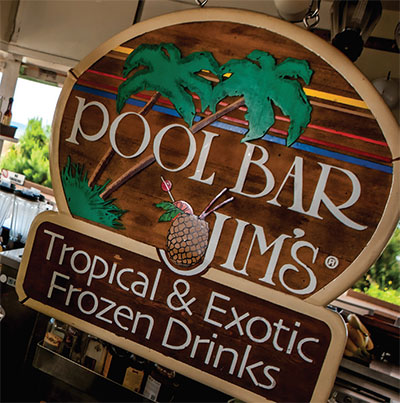 It’s easy to forget that Jim Lisenby didn’t become Pool Bar Jim by accident. Or overnight. There’s a keen business savvy that he developed over the years. Some of his insights come naturally, some were earned through trial and error. But they form a philosophy that proves there’s money to be made having the time of your life.

Start with the atmosphere at the bar. It seems like customer satisfaction would be practically a given when you have these kind of beach surroundings and killer drinks. But it’s a deliberate approach Lisenby takes in selecting each member of his staff.

“The key to the whole operation is the employees. Your employees make or break you no matter what business you’re in,” he said. “Personality is more important to me than anything. Whenever you come to work here, it’s showtime.”

And while he’s in the happiness business, there have been times when Lisenby had to put the business first. An example came when he first arrived on Hilton Head Island, taking over a small beach bar inside Sea Pines.

“The locals had gotten used to bringing their own beer coolers and not spending any money. Well, I put a stop to that,” he said with a chuckle. It didn’t endear him to islanders. “I didn’t go to any nightclubs; I didn’t go anywhere because those locals didn’t like me at all.”

Fortunately, it gave him time to work on another of his business ventures — his first book, “Pool Bar Jim’s Famous Frozen Drinks.”

First published in 1979, it was the book that ultimately built the Pool Bar Jim brand.

“We sold 43,000 copies of that one,” he said. “There was a book-publishing convention at the hotel and I asked around about getting it published by a big publisher. They said, ‘You’ll make more money selling it yourself than you would going through a publisher.’ ”

But perhaps his biggest piece of business advice is one he learned the hard way, through his ownership of a nightclub a few decades back.

“There were so many nights where we had a line, people got sick of it,” he said. “I have just enough business now where I can still talk to my customers. When I lose that interaction, I lose my business.”

Aspiring MBAs take note, saddle up to Pool Bar Jim’s, grab a Lava Flow and look for the smiling gentleman in the Hawaiian shirt. He might just teach you a thing or two.