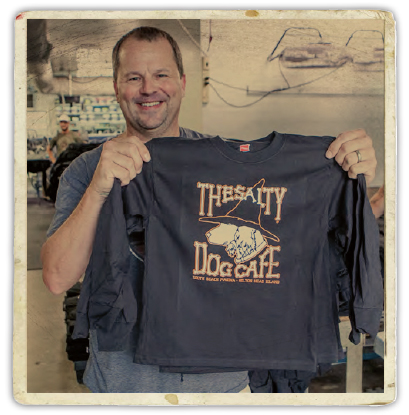 The dream for the Salty Dog Café was simple: marry a picture-perfect waterfront location with delicious Lowcountry dishes and happy, soothing tunes played by local musicians.

Thirty-three years later, the iconic eatery at South Beach Marina has grown into a 350-employee business empire and is a hit with vacationers and locals alike.

When the Salty Dog launched in 1987, a T-shirt was created to be a laid-back uniform for members of the restaurant family. Soon, diners wanted their own memento of their trip to South Beach and it became clear that Salty Dog and its Sou’wester hat-adorned mascot, Jake, were becoming more than just a logo.

“It’s been amazing to see this grow into such an enduring lifestyle brand. I think this retriever speaks to people, touches their heart,” said Steve Hughes, Director of Screen Print Operations for the Salty Dog T-Shirt Factory.

As the handful of T-shirt requests exploded into its own business, the Salty Dog wanted to ensure those symbols of island life be produced on Hilton Head Island. So, a silkscreen shop was opened in 1989 and Hughes joined the effort in 1991. 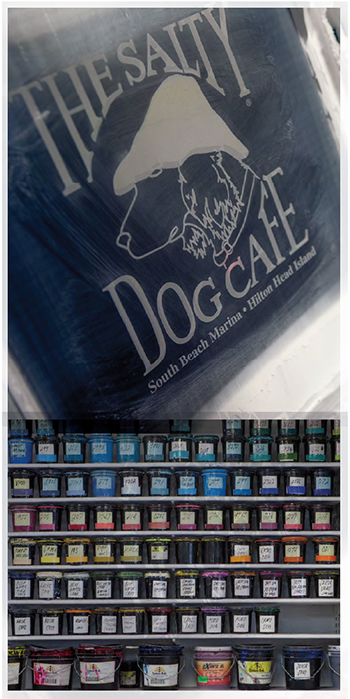 “We moved from Indiana and I was looking to put my experience to work for the right operation. Man, did I ever find the right spot,” Hughes said. “We’ve done side work for local business and partners like the Island Rec Center, but by and large, we have been busy day and night for 30-plus years with Jake and the Salty Dog world.”

The T-shirt factory has become the flagship of the Salty Dog merchandise universe, a place where fans can pick up everything from sweatshirts to dog collars, baby onesies to squeaky toys, cookbooks to Tervis tumblers – all while watching Hughes and his team produce T-shirts to keep up with demand that has grown exponentially each year.

While the thirst for Salty Dog gear has evolved and widened, the production of the legendary shirts has largely remained the same – Hughes, his handful of skilled silkscreen artists and an automatic press.

“We’ve got shops in Key West, Bluffton and Charleston, we fulfill orders from around the world, but the vast majority of all the shirts continue to be made right here on Arrow Road,” Hughes said.

Hughes works hand-in-hand with Salty Dog execs to create both limited edition seasonal T-shirts — with everything from Jake as Santa, boat captain and a race-car driver —  and to encompass the growing number of company brands such as the Blue Water Tackle Shop, Salty Dog Lager and Salty Dog Ice Cream. T-shirt trends and technology have evolved during the past three decades, but Jake and his yellow rain hat have remained the top dog in the T-shirt game.

“We’ve added different styles and materials, different colors and more than 20 different shades of the Hanes Beefy T. I’ve created alternate logos, even my daughter has created logos for the brand, which has been truly special for our family,” Hughes said. “But the classic white-and-yellow design continues to be the Cadillac, the gold standard and the biggest draw by far.”

Production slowed earlier this year due to the COVID pandemic, but Hughes said especially through the hard times, Jake the Salty Dog has always been an elixir and a reminder of better times ahead.

“We’ve had a huge summer and online sales just continue to grow,” he said. “I think especially for those who can’t make it here this year, Jake and the T-shirts are a comfort and a reminder of where they want to be.”

For more information on the Salty Dog Cafe and its T-shirts, call 843-671-2233, email info@saltydog.com or visit saltydog.com.