If there are two things that define a visit to Charlie’s L’etoile Verte (French for “Charlie’s Green Star”), they are constant change and a sense of sharing.

The constant change comes from the menu, updated every day by hand just as it has been since the restaurant opened in 1982. The classics —mouth-watering dishes that have cemented Charlie’s place among the exquisite island restaurants —  never change. But every day brings something new, the product of a chef’s sudden inspiration or the availability of an enticing ingredient. And every day, founder Charlie Golson’s daughter, Margaret Pearman, re-writes the menu. 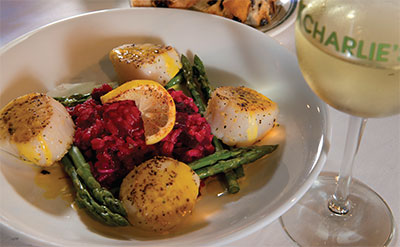 The other constant is a sense of sharing. There are simply too many alluring options on one day’s menu to select just one; it’s not uncommon to see large parties swapping forkfuls of tender, juicy steak or a flake of flounder meuniere. Try being the only person at your table to order the caramel cake. You’ll be sharing whether you want to or not.

These two tenets of the Charlie’s experience were tested over the past year when Golson fell ill with a staph infection in his spine. Stricken in June, Golson has faced a long road of procedures and physical therapy, confining him to a wheelchair. For him, it meant strenuous recovery. For his restaurant, it meant losing its guiding star.

“We cussed at each other every day about how to do things, now I wish he was here to cuss at him,” said Pearman, who split managing duties with her father prior to his illness. “Over the past six months, at first it was, ‘Stop drop and roll.’ Now we’re at a point where we can maintain a little easier.”

For a family-run business, one which saw the majority of the decision-making split between Golson, son Palmer and Pearman, Golson’s absence was a sudden and tremendous change to overcome.

Fortunately, the sharing at Charlie’s doesn’t just happen over entrees. 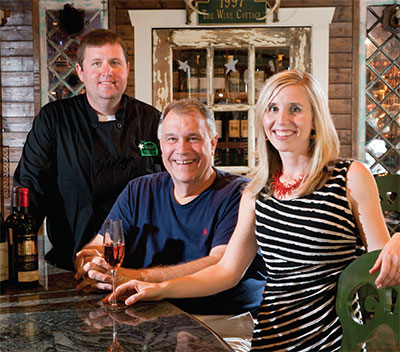 “My brother and I were up and down from here to Charleston and Atlanta for my dad, which put us out of the picture much more than we would normally be at the height of the season,” Pearman said. “Everyone stepped in to fill in where they were needed.”

Shouldering part of the load was new chef Josh Castillo, who had already established himself as one of the more creative culinary minds on the island. And it doesn’t hurt that he is one of the few chefs who also dabbles in desserts, something that usually fell to Golson or Pearman. “Finding that fit is usually hard in that aspect,” she said.

Patrick Fille, a native of Hilton Head whose parents used to own The Mariner, also proved invaluable at. “He came from the restaurant business growing up,” Pearman said. “He really gets the family business aspect.”

Castillo, Fille and the rest of the restaurant’s staff rallied around the family as Golson fought for his health. And the family appreciated the help.

“I’ve started to ask more of the staff,” Pearman said. “I’ve finally learned how to delegate more, but it takes a little bit of letting go.”

Golson continues his recuperation at NHC HealthCare in Bluffton, waiting for accessibility upgrades to the historic Myrtle Island home he shares with wife Nancy. He can rest easy knowing his restaurant continues to shine.