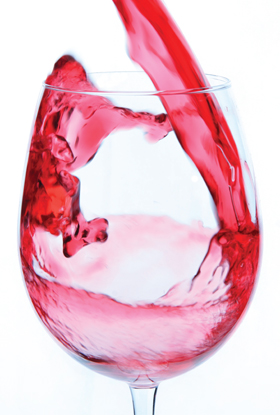 After being unfashionable for a while, rosé wines are increasing in popularity. In major markets, stores carrying perhaps five different wines a few years ago now offer more like 20.

The change is evident on the Island: Red Fish, for example, has a rack of rosés in a prominent position by the entrance, and most of the specialty stores carry several well-chosen selections. This is particularly welcome for the summer, when a rosé can be an ideal and versatile wine with enough different styles to work with most dishes.

All rosés are made from red wine grapes, and any of them can be used to make a rosé. The wines work particularly well with Mediterranean food, and that’s probably why the producers in southern France have such a long and established history. Many of these wines are made from a blend of grapes also characteristic of their red wines, and these same grapes are to be found in some of the best rosés from California.

In addition to the choice of grapes, there are two characteristics that determine the flavor of a rosé: the intensity of the color and the degree of sweetness. The color comes partly from the juice, and mainly from the grape skins, left in contact with the wine for a much shorter time than if the wine were to be a traditional red. The dryness or sweetness of the wine is determined by how long the juice is fermented, so that a dry wine will contain 13% alcohol or even more, and means that the conversion of sugar to alcohol is essentially complete. In contrast, less alcohol generally reflects unfermented sugar, so the wine is noticeably sweeter.

Typically, rosés are made with little or no exposure to oak, so they taste fresh and fruity. They are not often complex wines or made to age, so it’s best to look for wines that are not more than two or three years past the vintage.

The appearance of White Zinfandel in the ‘70s had an unfortunate effect on the perception of traditional rosés, almost all of which are dry wines. White Zinfandel originated at the winery Sutter Home from a batch of freshly pressed Zinfandel juice where the fermentation failed to complete, and the winemaker was left with a wine much sweeter than that intended originally. Rather than dump it, he waited awhile, decided it tasted better than he had feared, and thought it might have a market. Thirty years later, White Zinfandel accounted for 10%, by volume, of the wine sold in the U.S.

Since White Zinfandel is actually pink, too many people who didn’t like it never tried other pink wines, and those who preferred a sweet finish never became interested in the traditional rosés, which, by the ‘90s, had almost disappeared from the market. The renewed interest means there are several worthwhile choices in the area, most in the currently popular $10-20 range. Wines in this group are generally made by smaller wineries and have greater individuality.

A century ago, “Pink Champagne” had an aura of delicious wickedness, an image it retained when it became the signature drink for Deborah Kerr and Cary Grant in “An Affair to Remember.” It’s produced as a rosé, and has become popular again both in Champagne and in California. It makes an excellent aperitif and can continue to be drunk through a meal.

The Gruet family has been making Champagne in France since the 1950s, and, 25 years ago, set up a winery in Albuquerque, N.M., with the vineyards to the south at a high elevation. Their reputation as a producer of sparkling wines is increasing — the White House recently purchased their wines. Even so, they have not received the same recognition as the French operations in California, so their wines are a better buy than those from Mendocino, Napa and Sonoma.

The Gruet Rosé Brut non-Vintage is made from Pinot noir, with a more intense fruit flavor than their traditional sparklers. It has a clean, dry taste without the astringent finish (aftertaste) that can detract from many of the less expensive rosés, whether sparkling or still. It could be drunk with any fish dish and with the lighter meats, but would be a bit lost with a steak.

The traditional rosés cover a range of styles, from very light to much darker, and with a more intense color and flavor. The following selections described are designed to illustrate this entire range.

The lightest, so light that it’s barely pink, is the Château La Tour de L’Évêque, Pétale de Rose, from Provence. The winemaker, Régine Sumeire, is highly regarded. The wine is featured in a book, “My Best Wines at the Best Price”, by the sommelier at Guy Savoy, the Michelin 3-star in Paris.

The 2007 wine is made from a typical Provençal mix: mainly Cinsault, Grenache and Syrah, together with small amounts of other grapes. Even if it has the lightness of a rose petal and looks almost like a white wine, it doesn’t taste like one. There’s more body and the hint of the flavor of red wine, only without the tannins. It’s an excellent aperitif, goes well with smoked salmon and also works with lighter fish dishes.

Elegant is not an expression normally associated with rosés, but is a fair description of the 2007 Zaca Mesa Winery Z Gris. The estate is at the northern end of Santa Barbara County, in the Santa Ynez Valley, where they’ve been growing Rhone-style grapes since the ‘70s, with all their wines produced from the vineyard grapes. President Clinton served their wines to the French President at a State Dinner.

Their rosé is made just from Grenache, and the fruitiness and the tannins are perfectly balanced. It has a more intense color and flavor than the Pétale de Rose, but the tannins from the grape skins don’t intrude on the finish. It is very food-friendly, working well with a rich shrimp-avocado salad, and would be fine with
grilled chicken or lamb.

Another example of a more sophisticated rosé is the 2007 Domaine Charles Audoin Marsannay. This comes from the northern end of Burgundy, from the only commune in the region with a sustained history of producing rosés. The wine, made entirely from Pinot noir, is a salmon pink and remarkably full-bodied for such a light-looking wine. It has the “red fruit” flavors of Pinot noir, but they are lighter and more subtle than those found in a red wine. It’s versatile with all but the most strongly flavored foods: perfect with soft-shell crabs, and equally comfortable with chicken.

If these first three might be called refined rosés, the next is more typical of an everyday wine, but no less enjoyable. Anyone who has sipped a rosé over lunch at an open-air restaurant in a village square in the South of France will recognize the taste! The 2007 Château de Campuget, Costières de Nîmes is a delightful example of a rosé from the Rhône Valley, and is made mainly from Syrah with a small fraction of Grenache.

The wine has a more intense color than the previous three, giving it more body and fruitiness. Although it is very dry, there is no detracting, astringent taste of tannins in the finish. The different flavors don’t come together so smoothly, but it’s a refreshing aperitif and ideal for less complex dishes.

Further up the Rhône Valley to the north, the area around the town of Tavel produces rosés long considered among the best in France. There are many producers in the region, but the best values tend to be found in the smaller wineries, of which the Chateau de Ségriès, Tavel Rosé is a good example (the wine was rated “Best in Tasting” a couple of years ago in the Wall Street Journal).

The winery is a member of “Vigneron Indépendant,” a group of winemakers committed to high standards of quality, whose logo is a small character with a barrel on his shoulder to be found on the cap covering the cork on their bottles. It’s a logo worth remembering, since their members’ wines are often excellent value.

Tavel rosés are always a blend, typically of several grapes. This 2007 is made mainly from Grenache and Cinsault, with a little Clairette and a hint of Syrah, i.e., a similar blend of grapes to the Pétale de Rose, but what a difference! It’s a powerful wine for a rosé, with a darker color than the others, and a fruity aroma. The fruitiness makes it seem less dry than it actually is, and, since it spent longer with the grape skins, there is a hint of an astringent finish that makes it a little less appealing as an aperitif, but vanishes when it’s drunk with food. If you’d like to explore a rosé with steak, this would be one to try.

For a Californian take on a very similar blend of grapes, try the Bonny Doon Vin Gris de Cigare (the strange name is explained on the label). In contrast to the complex finish of the Tavel, the Bonny Doon is remarkably smooth and simple. It has a similar intensity of flavor, but the tannins have been softened, first by leaving a faint trace of sugar at the end of fermentation, and then by more exposure to oak than is usual for a rosé. The wine can hold its own against most foods.

The last on this list is a non-traditional rosé from a non-traditional wine-growing district. The NQN winery in Argentina was founded in 2001 in the province of Neuquén in Patagonia, some 400 miles south of the established vineyards in and around Mendoza, with stateof-the-art facilities housed in an impressive underground structure.

Judged by the NQN Malma Rosé, the owners’ confidence in the region is paying off. The wine is made mainly from Malbec with a little Cabernet Sauvignon, grapes used for powerful red wines, making it one of the wines with the most intense flavor. As with the Bonny Doon, its smoothness is achieved in part by leaving a hint of sugar behind at the end of fermentation, but nothing like the extreme sweetness of some White Zins! Like the others in this last group, it’s food-friendly, particularly with the more robust dishes.

Is there one standout, knock-your-socks-off wine in this group? Probably not, since they are all suffciently different both in character and food-affnity. The first three in this group of seven are particularly good as an aperitif and with light dishes; however, if their dryness doesn’t appeal, then the last two could work in their place. The wines do show a fair relationship between price and quality. The Costières de Nîmes with the simple charm costs the least, and the smoothly complex Marsannay, the most. These are by no means the only choices available, but they do cover the spectrum of flavors to be found. See which ones you like, and then go exploring!

WHERE TO FIND THEM