A seasonal Southern rite of passage 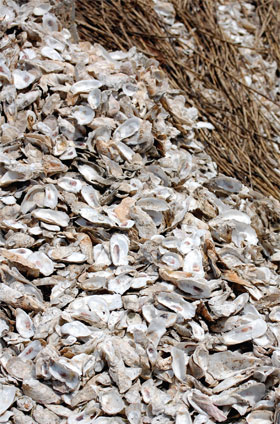 used to joke with relatives up North that South Carolina only has two seasons: hot and not hot.

The truth is, seasons in the Lowcountry — yes, there really are four — are flled with subtleties, especially autumn, when it’s still possible to swim by day, and wear a cozy sweater at night.

It marks the beginning of oyster season, and because of the splendid weather, it’s a great time to attend an oyster roast, an event that’s equal parts tradition and Southern rite of passage.

Nobody can claim to be South Carolinian without bellying up to a table of complete strangers and painstakingly, plucking the salty morsels from a pile of steaming, pluf mud covered mollusks. Trust us, it tastes way better than it sounds.

Although the Lowcountry has no shortage of community oyster roasts (pretty much every weekend through April), there’s no reason a family, neighborhood or group of friends can’t organize one in the backyard.

To host an oyster roast, you’ll frst need to surround a fre pit with four cinder blocks and place a piece of scrap metal or grate on top.

Build the fre in advance. Oak is the preferred wood because it creates large embers and little smoke.

One bushel of oysters (about $20) will feed 10 people. Always make sure they’re local and recently harvested from one of our many tidal creeks and rivers. Blast them with a hose to wipe away as much mud as possible.

Once the fre has died down and the metal is blazing hot, shovel a thin layer of oysters on top. Cover with a wet burlap sack or wet towels, so the steam trapped inside cooks the oysters. They’ll be done in about 10 minutes, or when the shells pop open.

Spread the bounty on an outdoor table. Make sure to have plenty of thick cotton gloves and oyster knives on-hand. Both are available at local seafood markets and select grocery stores.

Accompany with lots of beer, paper towels, saltine crackers, cocktail sauce and hot sauce. If it’s really cold outside, consider warming up with some whiskey.

Prepare some hot dogs and chili, the traditional insurance policies for children and others who don’t enjoy shellfsh.

Repeat until everyone’s had their fll, and then bask in your guests’ unabashed appreciation and the interesting conversation that’s bound to follow.

Bluffton Oyster Roast: Held every year on the banks of the May River, the Bluffton Oyster Roast is the community gathering of the year for new and old Blufftonians alike. The next oyster roast will be held on Jan. 30 at Bluffton Oyster Factory Park, home of the state’s only remaining oyster shucking plant. For more information, visit www.blufftonrotary.org.

St. Peter’s Oyster Roast and Microbrew Festival in Port Royal: What can be better than an event combining oysters and hard-to-find beers? Absolutely nothing, in our opinion. Benefiting the church’s Catholic school on Lady’s Island, the oyster roast will be held Jan. 23 at the park in Port Royal. For more information, contact Doug Massalon at 843-227-1280.