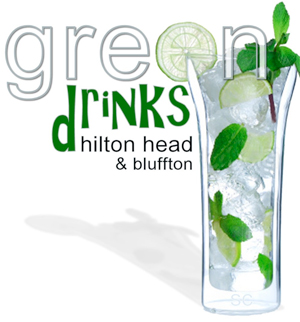 There’s one in Cape Town, South Africa. There’s another in Jakarta, Indonesia. And there’s yet another in Laayoune, Morroco. In fact, there are more than 500 chapters of “Green Drinks” worldwide, including one right here in the Lowcountry.

Green Drinks is an opportunity for people interested in the environment to get together and discuss issues such as sustainability and conservation. They also network and, well, drink.

Locals Mark Wisener and Chris Gerards had been attending Green Drinks at chapters in Savannah and Beaufort. Then about a year ago, they decided to stick closer to home and start the Bluffton/Hilton Head group.

“Green Drinks is not an original idea,” said Gerards. “It started a decade ago in England to get people together to talk about green initiatives. There are even rules and bylaws to this thing.”

Gerards, Wisener and about 20 to 25 members gather on the last Thursday of every month. There is no fee to join the group.

“It’s really a lot of fun,” said Gerards. “You get to know new people and it’s very informal. One of the prerequisites is you can’t sell stuff. We also don’t collect any money. There is no pressure that way.”

The meetings are held at a different location every month. “We change the venue around to go back and forth between Hilton Head and Bluffton,” said Gerards.

The venues have also been generous.

“A lot of the (bars and restaurants) where we’ve had meetings give us generous drink discounts and free food,” he said.

Green Drinks Bluffton/Hilton Head has also gone beyond just gathering like-minded people together. It now features a speaker at the gatherings. For instance, the September meeting was held at WiseGuys and the featured speaker was Kyle McLean, a regional director for Repower America in South Carolina, who discussed the climate bill in Congress and its implications for the state.

“After about six months (of meeting), we started to introduce speakers to attract more people,” said Gerards. “The speaker usually goes for 20 minutes.”

“But really, it’s mostly a reason to booze,” he joked.

For more information on Green Drinks Bluffton/Hilton Head, call Chris Gerards at 816-0317, or Mark Wisener at 757-8520. On the web www.greendrinks.org/