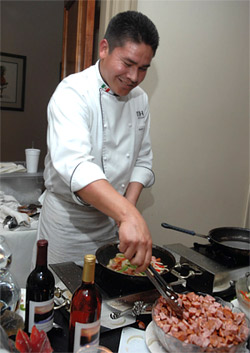 When it comes to holiday gatherings, it’s all about the food. Taste of the Season has become one of the area’s premier events for foodies and for those just looking for a deliciously good time.

The 19th annual Taste of the Season hosted by the Hilton Head Island-Bluffton Chamber of Commerce from 6 to 9 p.m. Nov. 14 is the unofficial kickoff to holiday feasting for the Lowcountry.

It is a festive sampling of the myriad restaurant options from Hilton Head Island, Bluffton and Hardeeville.

Not one, but two celebrity guest chefs will mingle with merry-makers at this year’s event. Lowcountry resident Nathalie Dupree launched the New Southern Cooking movement. She has authored 10 cookbooks and hosted several cooking shows on PBS, The Learning Channel and The Food Network. Dupree is also the winner of two James Beard Awards.

Chef Marvin Woods brings international flair to Southern cuisine. A restaurateur, cookbook author and TV host of Turner South’s “Home Plate,” Woods has impressed palates at some of the country’s most acclaimed restaurants. He’s cooked at The Sea Grill at Rockefeller Center, Café Beulah in New York and done a stint at The National Hotel in South Beach.

More than 40 area chefs and restaurants will fill the Sea Pines Country Club to overflowing. The voracious crowd can expect a menu that can be as exotic as coffee-rubbed bison or as familiar to home as shrimp and grits. But it remains up to tasters to decide if lobster macaroni and cheese is the epitome of elegance or the most decadent of comfort foods. 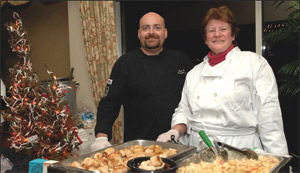 Despite boasting more than 250 restaurants, the region is still building its reputation in epicurean circles. The growth in popularity of Taste of the Season is a reflection that residents and visitors alike are hungry for more.

All the gastronomic decadence has garnered the attention of South Carolina’s only Fortune 500 company. South Carolina Electric & Gas is presenting sponsor of Taste of the Season, bringing more energy to planning the party.

With each and every bite, tasters will decide bragging rights for the area’s Best Cuisine. Conroy’s crab cakes remain a popular favorite with the crowd, but exciting submissions from competitors are making it tougher for the reigning champion. Shrimp Michael’s is nipping at their heels to take the coveted crown. 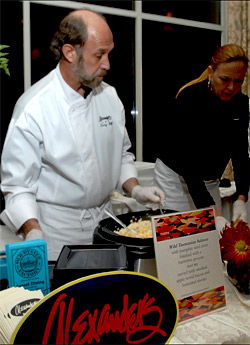 The event is known to sell out with attendees lining up at the door for pre-cocktails, wanting to relish each sweet and savory moment of the feast.

Tickets for Taste of the Season are now on sale for $35. They are available at chamber headquarters, the Welcome Center and the chambers Bluffton office in Belfair Towne Center (inside the Liberty Savings Bank building.)

Taste of the Season

The Hilton Head Island-Bluffton Chamber of Commerce is sponsoring... The 19th Annual Taste of the Season!