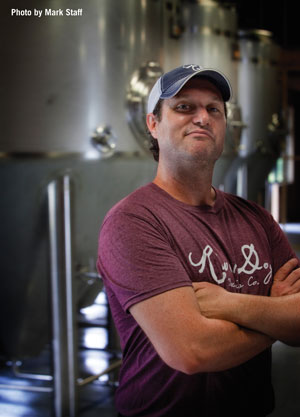 Here is what I know. It is difficult to interview a brewer, in a brewery, while standing up, trying to take notes and sip beer simultaneously. I managed awkwardly. Thus, I thought it only apropos that while I sit and type, I keep a beer nearby, just to keep the story consistent. You’ll thank me at the end.

Consistency is actually the key when you launch a brewery and basically overnight transition your home brewing hobby into your lifelong dream and new career. Enter James Brown. He’s doing just that and he feels good … like he knew that he would (enter brass accompaniment).

On this day, I am standing with Brown in River Dog Brewery’s enormous new space in Okatie. Workmen are spread about like oompah loompahs. office space is being framed out. Tasting room design is underway. Kegs are stacked in a corner creating perhaps the greatest beer can pyramid ever known to man. We’re standing in the ominous shadows of the enormous stainless steel fermenting vessels that will very soon be home to River Dog’s new brews. The excitement is palpable. The River Dog team is waiting on one final piece of equipment before they can fully execute their first monster and master batch of brew. The “Brew House” is on a truck, en route cross-country, and Brown is simply waiting for the delivery call. He admits, “It will be like Christmas morning when it arrives. The Brew House is where spirits turn into nectar.”

Once it arrives, the brewing process will be underway and Brown estimates that in just three weeks you’ll have your first sip of River Dog Beer. Brown has the process down to a science – cook, ferment, carbonate, kegs, cans, consumer. Speaking of science, that is exactly what brewing is. The masterful mix of stewing grains, extracting just the right amount of sugar to create a sweet alcohol, combining the sweet succulence with bitter hops, and then experimenting with whatever other ingredients tickle your taste buds. For Brown, his fifteen years of experimenting at home introduced him to many unlikely ingredients that he’s used to craft the River Dog recipes … different types of sugars including agave and honey, rose petals, citrus, pine, and he’s even talked of an oyster stout (playing off the salty brine of the May River waters). Turns out chili pepper is a no go; he won’t go back there anytime soon he says.

Brown is a Lowcountry boy who’s been in the Bluffton/Hilton Head area since the seventies (that almost makes him a local, according to some). Being raised on the coast and having enjoyed the May River’s allure, Brown is an outdoorsman and like the pull of the river’s current. But brewing was a passion that he couldn’t ignore. He chuckles proudly (yet with a hint of schoolboy mischief) when he admits that he was seduced a little too early by the taste of wines and whiskey. When he was legal, he really began to appreciate boutique wines and cheeses, tasting anything crafted in small batches by artisan hands. Unable to find craft beers in the Lowcountry, Brown would sample whatever he could (responsibly) when traveling to the West Coast, and Northwest specifically, where craft beers found their birthplace. Ever disappointed that the craft beer movement had yet to make its way to the Carolina Coast, Brown started brewing at home. And in the last few years as the craft beer industry has exploded (this past quarter, craft beer was the highest profiting business sector in the country), Brown began crafting his revised master plan. His lofty plan used to include an Italian countryside and his own vineyard, but playing on his love of the Lowcountry and the allure of the great outdoors, Brown starting mapping a brew plan instead.

And in what he calls “the year of serendipity” it all started coming together in 2012. Partners Josh Luman and Gabby Ferrell, of Corks Wine Company fame, were aware of the craft beer phenomenon and had been looking in that direction for their next business venture. Of course the local home brewers association – The Mead Ale Lager Tasting Society (MALTS) – had been holding their monthly meetings at Corks for some time. So they knew Brown, who often invited them to taste their concoctions.

“We reluctantly obliged,” said Luman, “I mean you never know what someone is whipping up in their basement!” Turns out Brown had an undeniable mastery of the math and chemistry that it takes to create good – no, great – beer. Soon after, a partnership was formed.

When it came to naming the new nectar. that too happened organically, according to Brown. In multiple conversation and email exchanges, the term River Dog continued to appear. What made it the obvious choice for their label (cans) was that everyone loved it for a different reason – each partner felt a different symbolic connection. For Brown, it could be the six river dogs he has at home. For Josh and Gabby, it too may have been a tribute to their black lab Floyd. But, the greater connection was made when thinking about the men and women who make their living every day on our rivers, in our marshes and creeks, it seemed like the perfect tribute to the people of this place that we all call home.

They say every dog has his day, now Brown has his. He’s here. He likes beer. Get used to it.

Our “Coastal Ale” is a Lowcountry take on the traditional Belgian witbier style (think “Blue Moon”, or Charleston-based Westbrook’s “White Thai”) where we deviate from the norm by adding floral components such as chamomile and rose hips to complement the Belgian yeast. This adds an almost perfume quality to the nose and certainly adds to the taste.

“Wing Man” is our pale ale done in the traditional American West Coast style, dry on the malt mouthfeel and flavor, balanced with a slight grassy bitterness that we then dry-hop (the act of adding additional hops usually right at the end of fermentation so as to create a powerful aroma and freshness of the nose that boiling the hops - which is done for bitterness - takes away) with a compliment of citrus hops to add the nice fruity nose.

“Fetch” is our IPA where we take the style to a 7.5% alcohol level and balance this with an array of specialty malts for a soft yet dry mouth feel and a wonderful earthy bitterness that make the beer big yet refreshing. To add to the experience we dry hop the snot out of it, creating this very tropical, fruity nose.