YOUR GUIDE TO FROZEN TREATS. GET THE SCOOP ON ICE CREAM, FROZEN YOGURT, GELATO & SMOOTHIES. 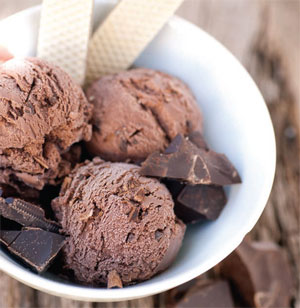 Clearly summer vacation is coming to an end, but the arrival of fall traditions like school, dance classes, and football don’t necessarily usher out the still quite warm weather here in the Lowcountry. The need for cool treats will still be going strong for at least three more months. Honestly, does the cool treat season ever really end around here? Do you stop craving ice cream, frozen yogurt, gelato and smoothies when you store away your white jeans and flip flops? Nah, we don’t either.

DID YOU KNOW?
Mussolini banned the sale of ice cream in Italy because he thought the confection was “too American.” On a related note, Italy is the birthplace of ice cream.

THE OFFICIAL WORD
Do you have to have a waffle cone or will a cup do? Are you fond of various toppings or do you prefer it plain? Do you match toppings to flavors, or do you have favorite toppings, no matter what the ice cream is? There are many ways to eat ice cream, and all of them are absolutely correct. Often called “The Great American Dessert,” ice cream is the oldest player in the frozen treat game, dating back to the 4th century B.C. It is usually made from dairy products, such as milk and cream and often combined with fruits or other ingredients and flavors. Most varieties contain sugar, although some are made with other sweeteners. The mixture of chosen ingredients is stirred slowly while cooling, in order to incorporate air and to prevent large ice crystals from forming. The result is a smoothly textured semi-solid foam that can be scooped.

WORD ON THE STREET
“I think ice cream gives a real form of satisfaction on a hot day, especially down here,” said Angie Kornstadt, who owns the local Dairy Queen franchise with her husband, Blake. “To the older crowd, I also think it brings back a lot of nostalgia of their younger days, especially at the Dairy Queen.”

“We use only fresh antibiotic-free, rbST-free milk and cream from family farms,” said Michelle Cheadle, owner of Kilwins. “Our select ingredients are combined into a premium base mix which is pasteurized and homogenized and then combined with fudge, caramel, nuts, chocolate chips, and other quality confections. Our ice cream is then creamily and expertly frozen into specially designed tubs that protect the superior quality.”

“Here at Jack Frost, we make high-quality ice creams, real fruit sorbets, Italian ices and sherbets daily, right in front of you,” owner David Folts said. “We are proud to be a ‘Best of Bluffton’ winner and a Lowcountry favorite. We are the only homemade in Bluffton so stop the car.”

“I think ice cream reminds everybody of when they were growing up and their childhood,” said Jason Hinzman of Marley’s  Ice Cream & Trading Company. “Nothing beats having an ice cold, frozen ice cream when it’s hot outside.” “Ice cream is about 50 percent air,” said Creegen Edmonds, owner of Hilton Head Ice Cream. “That salt air, and a lot of love, is the secret ingredient.” 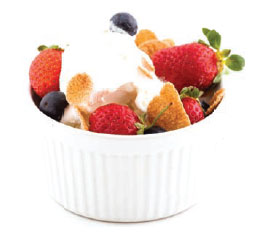 DID YOU KNOW?
Many people tout the benefits of yogurt as a high-calcium food, but did you know yogurt is also a good source of magnesium and potassium, both of which help reduce high blood pressure?

THE OFFICIAL WORD
Made with yogurt and sometimes other dairy products, frozen yogurt is more tart than ice cream and is lower in fat due to the use of milk instead of cream. It was introduced in the United States in the 1970s under the name Frogurt. It took off in the 1980s, reaching sales of $25 million in 1986. In the early 1990s, it was 10 percent of the frozen dessert market. Today it is up to 30 percent and shows little sign of slowing. It can be made in a soft serve freezer in much the same way as soft ice cream. Mix is sold in both powder and liquid forms and is poured into a soft serve machine. You can choose a mix with high or low fat content and can choose how much air you introduce into it. The higher the level of fat, the more air it can absorb. The more air mixed or pumped in, the creamer the product will taste.

WORD ON THE STREET
“Once people try frozen yogurt they understand that it tastes every bit as good as ice cream but it is so much healthier,” said Jay Barr, owner of Josie’s Frozen Yogurt. 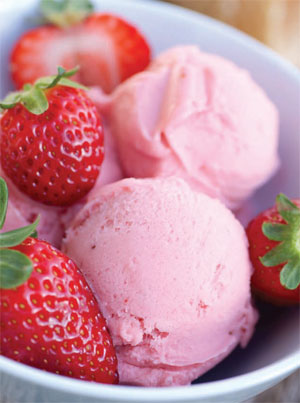 DID YOU KNOW?
Because gelato is made from milk, it is a great source of calcium for non-milk drinkers. Gelato in Italian means “frozen.”

THE OFFICIAL WORD
Gelato contains substantially less fat than traditional ice cream. It is frozen in a way that allows for much less air buildup (referred to as overrun), and is served at a slightly higher temperature. Due to this, supporters feel it releases much richer flavor tones. Gelato is made with whole milk instead of cream, as fat coats the tongue and mutes flavors. Super-premium ice cream, like some very famous brands have 15 to 20 percent butterfat. Gelato, on the other hand, contains 1 to 8 percent pure milk fat only. The cheapest ice cream is half air, or 50 percent overrun. That’s why generic supermarket ice cream comes in large yet light containers. The overrun in gelato is much lower, around 20 percent. Because gelato is  denser, it’s served at a lower temperature, which also intensifies the flavors.

WORD ON THE STREET
“Pino Gelato scoops some happiness in the form of authentic gelato and sorbetto,” said Claire Tulas, owner of Pino Gelato. 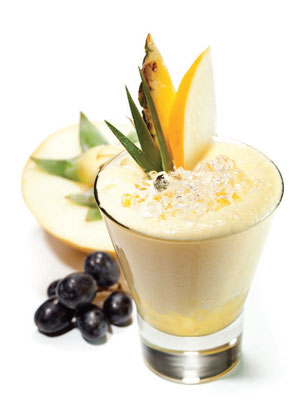 THE OFFICIAL WORD
A smoothie is a blended and sometimes sweetened beverage made from a variety of ingredients such as fresh fruit, crushed ice, frozen fruit, honey, syrup and more. They have a milkshake-like consistency that is thicker than slush drinks and can also contain milk, yogurt or ice cream. They are often marketed to health-conscious people, with many restaurants offering add-ins such as soy milk, whey powder, green tea, herbal supplements or nutritional supplement mixes. They became widely available in the United States in the late 1960s when ice cream vendors and health food stores began selling them. By the 1990s and 2000s, smoothies became available at mainstream cafes and coffee shops and in pre-bottled versions at supermarkets all over the world.

WORD ON THE STREET
“It is a meal in a cup and easy to digest in hot summers,” said Marty Crocker, owner of SmuthILand.