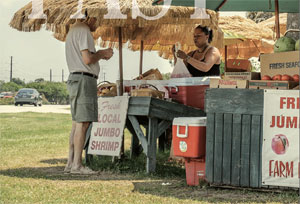 Before the developers, before the tourists, before The bridges, Hilton Head Island was a much different place. A much simpler place.

Following the Civil War, Union troops left newly freed slaves behind to fend for themselves. As property became available, many freedmen used their hard-earned money to purchase land in areas such as Baynard, Squire Pope and Chaplin.

Families such as Aiken, Brown, Campbell, Grant, and King raised generation after generation off the land. Vine-ripened tomatoes, butterbeans,Vidalia onions, sweet potatoes, squash and more were grown in small fields, next to coops of chickens, pens of pigs and pastures of cows.

This agricultural island transformed into a resort destination starting in 1956 with the developing of Sea Pines Resort. Soon, other developments followed, such as Hilton Head Plantation, Palmetto Dunes, Shipyard and Port Royal, imitating Sea Pines’ architecture and landscape.

Today, just a couple of the small farms remain. The culture and tradition of those native island families is still very much alive, though. 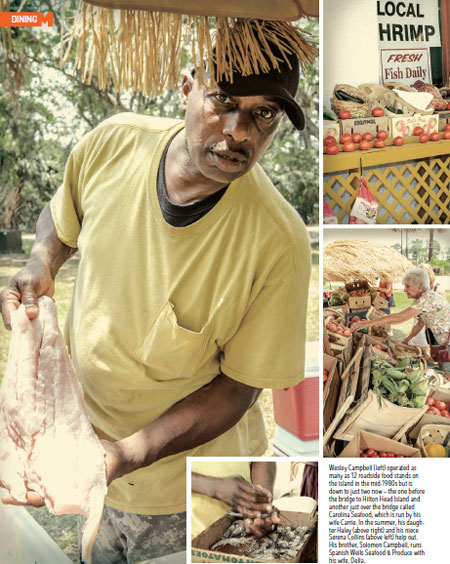 Street signs for Bradley, Burkes and Singleton roads along U.S. 278 serve as a testimony to family, community and selfreliance. Many of the roadside fruit, vegetable and seafood stands that dot the island also honor Hilton Head’s past.

Wesley Campbell (left) operated as many as 12 roadside food stands on the island in the mid-1980s but is down to just two now — the one before the bridge to Hilton Head Island and another just over the bridge called Carolina Seafood, which is run by his partner Carrie. In the summer, his daughter Haley (above right) and Serena Collins (above left) help out. His brother, Solomon Campbell, runs Spanish Wells Seafood & Produce with his wife, Della.

Find baskets of potatoes, watermelons,  tomatoes, peaches and red coolers stocked with shrimp, grouper and red snapper. On the weekends, Chef Rowland Washington of “We Island” Gumbo n’ Tings stopsby with his selection of Lowcountry seafood spices and products. 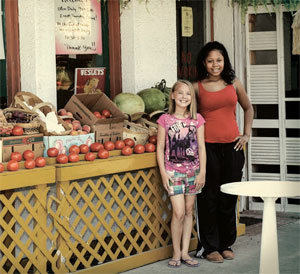 “When I’m looking for fresh seafood, this is the place I come to,” Bluffton resident Chris Jones said. “Fish behind the glass at a grocery store can’t compete with what he’s got in those coolers back there.”

Campbell, 59, started selling local produce from his bicycle at the age of 15, peddling house to house in Bram Point. “It was stuff our parents and our uncle would grow in the summer,” Campbell said.

When he got out of school, Campbell started opening fruit and vegetable stands. He operated as many as 12 stands on the island in the mid-1980s but is down to just two now -- the one before the bridge and another called Carolina Seafood, located at 148 William Hilton Parkway, between the first and second traffic lights on the island.

That stand specializes in fresh peaches, tomatoes and seafood. It has been open for six years and is operated by Campbell’s wife, Carrie. Over the summer, his daughter Haley and his niece Serena Collins also help out.

The stand, located at 556 Spanish Wells Road, has been open for 25 years. Della is a retired school teacher while Solomon retired from Suburban Propane before joining the family business.

“We’ve been very successful,” Solomon said. “We have people that come to us from all over the United States and abroad.” 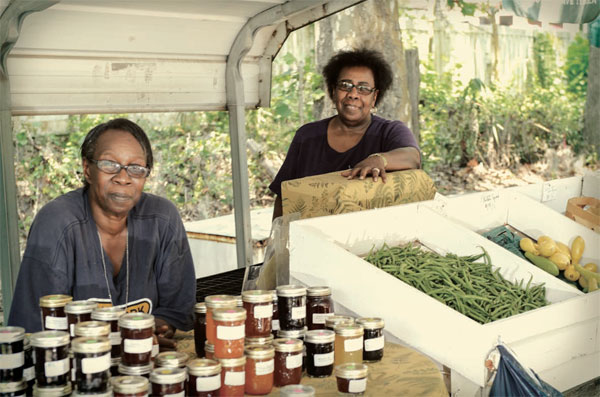 Estelle Grant Aiken was a teacher at Hilton Head Elementary for more than 33 years. She now works the Garden Fresh Produce stand off Squire Pope Road with her sister Lillian Grant King, a business major that also worked in education before getting into the family business. Known to some locals as “Eddie’s Market,” the stand has been an island staple for 25 years, serving butterbeans, peas, peaches, tomatoes, summer squash, jams, deviled Daufuski crab and their delicious homemade bread and butter pickles. Items come from Aiken’s backyard, King’s farm in Ridgeland and other local farmers. 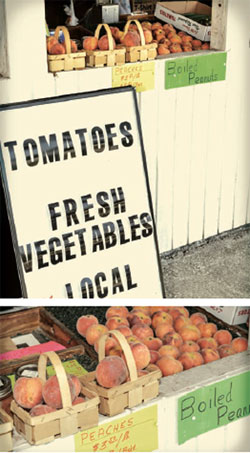 “Farmers markets are popular now but (roadside stands) got it started,” Aiken said. “People can get fresh, local stuff at reasonable prices and you will find things that you normally wouldn’t find in a supermarket. It’s also a place to meet people and catch up on what’s happening in the community.”

Two more Grant family stands are located on U.S. 278, near Harold’s Diner. The one behind the first row of houses, sitting under a large oak tree, is Hilton Head Island’s original roadside stand. It was opened by Solomon Grant Sr. and Gertrude Brown Grant 50 years ago and is the original Grant’s Fresh Produce. The stand was being run by Solomon Eddie Grant Jr., but health problems have forced him to temporarily close it.

Cousins Julia Grant Thomas and  Joseph Grant run the roadside stand next door, which is also called Grant’s Fresh Produce. The stand offers some of the largest tomatoes you will ever see along with fresh watermelons, peaches, zucchini, squash, collards and peppers.

Selling local produce has been passed down from generation to generation in the Grant family but the tradition could soon end. “My daughter and my sister’s children all worked here when they were younger but they didn’t like it, being out here in the heat,” Aiken said. “Unfortunately, unless somebodysteps up and says they want to do it,this may be the end of the line for us.” 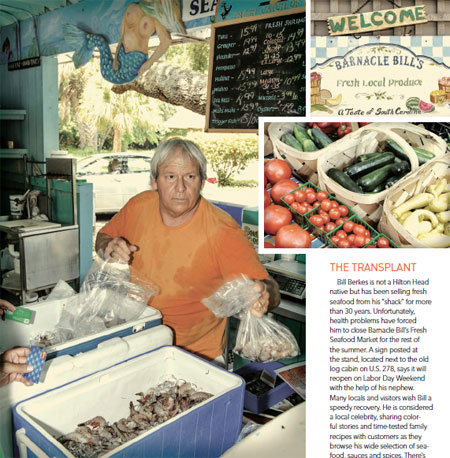 Bill Berkes is not a Hilton Head native but has been selling fresh seafood from his “shack” for more than 30 years. Unfortunately,   health problems have forced him to close Barnacle Bill’s Fresh Seafood Market for the rest of the summer. A sign posted at the stand,  ocated next to the old log cabin on U.S. 278, says it will reopen on Labor Day Weekend with the help of his nephew. Many locals and visitors wish Bill a speedy recovery. He is considered a local celebrity, sharing colorful stories and time-tested family recipes with customers as they browse his wide selection of seafood, sauces and spices. There’s a blackboard that lists all sorts of fish which changes daily based on what is running and what is delivered. Guitarist Brad Nelson also helps set the mood with live  music.

On the Barnacle Bill’s Facebook page, Berkes posted, “I would like to thank everyone for their support and words of encouragement. I will miss you all and look forward to seeing all you guys next year. Take care. Barnacle.” 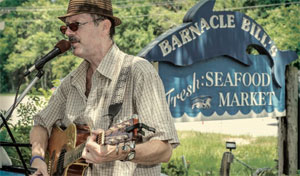 Bill Berkes runs Barnacle Bill’s Fresh Seafood Market on U.S. 278. Music is provided by guitarist Brad Nelson (right). Due to recent health issues, Berkes has closed his stand for the remainder of the summer. He plans to reopen the stand on Labor Day Weekend with the help of his nephew. The stand features a blackboard that changes constantly, based on what is running and what is delivered.