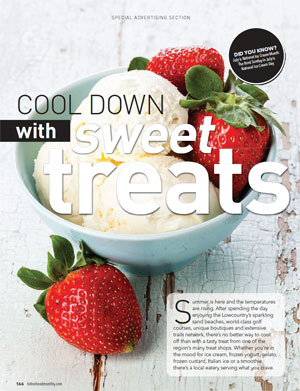 Summer is here and the temperatures are rising. After spending the day enjoying the Lowcountry’s sparkling sand beaches, world-class golf courses, unique boutiques and extensive trails network, there's no better way to cool off than with a tasty treat from one of the region’s many treat shops. Whether you're in the mood for ice cream, frozen yogurt, gelato, frozen custard, Italian ice or a smoothie, there's a local eatery serving what you crave.

Ice cream and similar desserts have roots that reach back as far as the second century B.C., according to the International Dairy Foods Association. A letter written in 1744 by a guest of Maryland Governor William Bladen marks the first recorded mention of ice cream in American history.

“Why do people like ice cream? It’s good on hot day and it’s an American Tradition,” said Dave Tremarelli, part owner of Coligny Deli and Grill/ The Ice Cream Cone.

By the late 19th century, ice cream had become widely available thanks, in part, to advances in refrigeration and, in the years since, has soared in popularity to become one of America's favorite desserts.

“Ice cream is nice because there’s a large variety of flavors, it tastes great, cools you off after a hot summer day, and puts a smile on your face,” said Molly Lowery of Harbour Town’s Cups & Cones.

In the United States, the Food and Drug Administration requires that frozen desserts marketed as “ice cream” contain a minimum of 10 percent milk fat and 20 percent total milk solids by weight; desserts marketed as “frozen dairy desserts” fall below these requirements. Made by simultaneously stirring and freezing sweetened and flavored cream with additions such as fruit, cookies or candy, ice cream is available in thousands of varieties and flavors – with vanilla and chocolate being the most popular. The air incorporated during the freezing process gives ice cream its smooth, creamy texture.

A popular spot for ice cream is Kilwins.

“Since 1947, Kilwins has been offering a full assortment of 40 flavors of original recipe ice cream, with our salted caramel being our No. 1 seller,” Kilwins owner Michelle Cheadle said. “Along with hand-crafted chocolates, Kilwins offers caramel corns and brittles, caramel apples, and hand-crafted fudge, all made right in the store using original recipes and the very highest quality ingredients. Stop by and sample some today!” 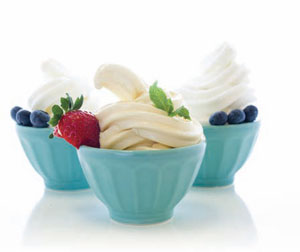 Introduced in the late 1960s, frozen yogurt is an increasingly popular type of frozen dessert made by freezing milk with flavorings, lactic acid cultures and other ingredients. The FDA doesn't mandate specific standards for frozen yogurt, so ingredients and other characteristics – such as texture – can vary. Generally speaking, frozen yogurt boasts a light, smooth texture similar to soft-serve ice cream.

Frozen yogurt is typically lower in fat than traditional ice cream and can be good for the digestive system. Like ice cream, frozen yogurt is available in hard-frozen and soft-serve varieties.

Self-serve froyo has exploded in popularity in recent years.

“At Lovin' Spoons you can create your own mix from 12 flavors and over 50 toppings,” founder Diane Kahn said. “Enjoy it in our groovy 70s atmosphere with 70s music piped in. You can even sit in our authentic VW bug with your treat!"

Lovin’ Spoons has locations in Savannah, Pooler and in the Belfair Towne Village shopping center in Bluffton. A popular spot on Hilton Head is YoAddiction!, located at the Fresh Market Plaza.

"YoAddiction! get's it's yogurt from the same guy Jack got the beans for his beanstalk,” owner Victor DelGuercio said. “It makes you younger, stronger, faster and smarter. Other than that it just tastes great."

Frozen custard – also known as French ice cream or French custard ice cream – is a decadent twist on an already-decadent dessert. Although frozen custard is made with virtually the same ingredients as traditional ice cream, it contains a much higher content of egg yolk solids, which results in a very dense dessert with a thick, creamy texture and smooth consistency. According to FDA regulations, in order for a product to be considered a true frozen custard, it must contain at least 10 percent milk fat and 1.4 percent egg yolk solids; anything with a smaller percentage of egg yolk solids is just regular ice cream.

“Gelato” is the Italian word for ice cream but, in the United States, the term refers to ice cream varieties made in the traditional Italian style. Made with cream, milk, sweeteners, flavoring additions such as fruit and nut purees – and without the incorporation of air during the freezing process – gelato is richer and creamier than traditional ice cream, despite the fact that it contains less butterfat.

"What is nice about gelato is its dense texture that make it so smooth and flavorful,” said Claire Tulas Teed of Hilton Head Island’s Pino Gelato.

In Italy, products must contain a minimum of 3.5 percent butterfat to be considered gelato, compared to the 18 to 26 percent butterfat found in traditional American ice creams. The lower percentage of butterfat results in a less-solid freeze and a delightful melt-in-your-mouth experience. Some eateries enhance the experience by serving gelato at temperatures 10 to 15 degrees warmer than they serve ice cream. 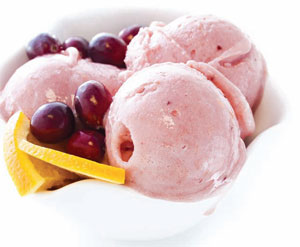 Italian ice, or water ice, is a frozen dessert made with sweetened fruit juices or purees. Not to be confused with flavored, shaved ice desserts, Italian ice is made using the same process used to make traditional American ice cream – by mixing the fruit juices, flavorings and sweeteners while they freeze. Although Italian ice is similar to sorbet and American-style sherbet, true Italian ice desserts do not contain dairy or egg yolks. Italian ice is available in a wide variety of flavors, including blue raspberry, watermelon, cherry, orange and strawberry.

“Taste the Happiness!” Rita’s Italian Ice owner Dave Tremarelli said. “Get happy at Rita’s with a selection of over 65 flavors of Italian Ice made fresh daily, plus a variety of other unique treats featuring our creamy frozen custard.” 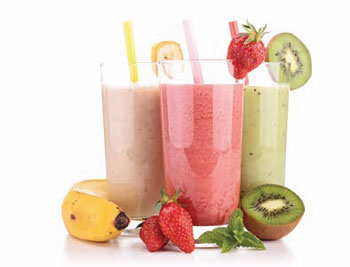 Introduced in the 1930s and widely available by the late 1960s, smoothies shot to true popularity in the late 1990s and early 2000s, when they became staple offerings at mainstream eateries across the country. Made by blending fruit with milk, yogurt, ice cream or ice cubes, smoothies are a great treat for people who want to have their frozen dessert and drink it too. Smoothies are often marketed to health-conscious people and can be made more healthy by choosing varieties made with ice cubes over those made with ice cream, and with the addition of optional nutritional supplements.

With more than 10 specialty dessert shops – including a few award-winning eateries – on Hilton Head Island, residents and visitors are sure to find a cool treat to satisfy their sweet tooth.