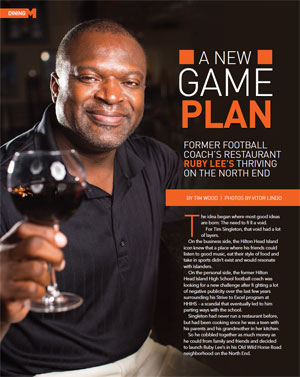 The idea began where most good ideas are born: The need to fill a void.

For Tim Singleton, that void had a lot of layers.

On the business side, the Hilton Head Island icon knew that a place where his friends could listen to good music, eat their style of food and take in sports would resonate with islanders.

On the personal side, the former Hilton Head Island High School football coach was looking for a new challenge after fighting a lot of negative publicity over the last few years surrounding his Strive to Excel program at HHIHS – a scandal that eventually led to him parting ways with the school.

Singleton had never run a restaurant before, but had been cooking since he was a teen with his parents and his grandmother in her kitchen.

So he cobbled together as much money as he could from family and friends and decided to launch Ruby Lee’s in his Old Wild Horse Road neighborhood on the North End. 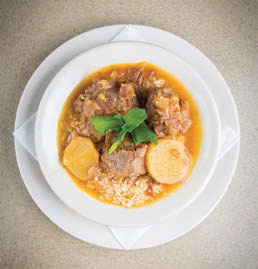 “This food, this life, it’s been embedded in my soul for the last 25 years,” he said. “All my guys would always talk about not having a place of our own in our neighborhood. So we took the plunge in December 2012.”

Eighteen months later, the restaurant and bar is quickly becoming not just a preferred neighborhood hangout, but a must-visit by both foodies and music lovers.

Singleton has made this truly a family affair. His parents, Martin and Deborah Govan, run the kitchen and are in charge of making sure that the staff perfects the family recipes perfected by Ruby Lee.

“It’s a constant tribute to the food, the love that gave me a foundation on how to be a man,” Singleton said. “Everyone who is part of this team, we want them all-in invested, doing anything and everything for the customer and to honor Ruby Lee.”

He also has his little sister, Tressa, working the front of the house and his two boys, high school sophomore Bryce and seventh-grader Jordan washing dishes. From there, he has brought in a number of local teens and mixed them with service veterans to create the most important component: service. 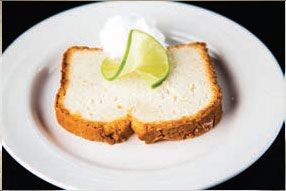 “I may not have known the business, but I knew service. I knew how I wanted to be treated and I’ve seen the components to that success,” Singleton said. “I have had a lot of great mentors to learn from on this island.”

He specifically pointed to Steve Carb and Rob Caldwell, the brains behind the SERG Group, and Matt Jording at The Sage Room as inspirations.

“Matt’s meet-and-greet service and quality are second to none and Steve and Rob have created unique experiences,” he said.

But Singleton’s biggest mentor, and one of his best friends, is Bob Masteller, one of the unofficial mayors of Hilton Head and owner of The Jazz Corner.

“I’ve had some low points over the past few years and Bob and his family never judged, they always provided me a safe haven,” Singleton said. “It has been one of my favorite places for so long. I just got lost in the music and the food experience. They just do it so well, you’d be silly not to mentor yourself after this. But beyond that, Bob is one of the nicest people in this world. 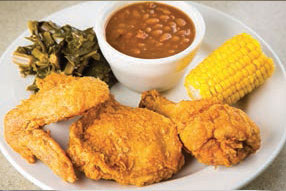 “That place, those people saved my life,” he said. “I didn’t have to hang my head there, there was just love and respect. So I honor that connection every day.”

Singleton set out to create a dressed down version of The Jazz Corner at Ruby Lee’s, adding his own touches.

On the food side, he took his family’s lead, adding his own touches culled from years of tutelage under Ruby Lee and his parents.

“I used to cook for my roommates in college. I just constantly experimented and loved it,” he said. “The passion for food has always been at the forefront. There’s just something about a perfectly done macaroni and cheese that warms the stomach. You can’t rush the pot. We take our time with everything. I think that’s what folks truly appreciate. They know it’s personalized every time.”

“I fall in love with the food all over again every day,” he said. “Wings, pork chops, shrimp and grits, fried chicken, collard greens, Ox Tail stew. You name it. It’s just amazing home cooking.” 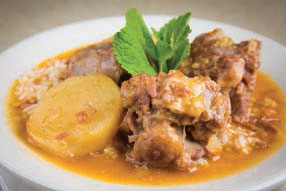 He’s worked just as hard on the wine list, with wines like Beringer and Kendall Jackson among his favorites.

And then there’s the music. Singleton is much more hands on here. He has worked to attract the area’s iconic stars of jazz and blues, such as Deas Guyz, Lavon Stevens and Louise Spencer and Target the Band.

“To know that I have someone, just as one example, like Louise that has the voice of Whitney and the grace of Patti Labelle and she likes playing here, it is truly a gift,” he said.

And the bands in turn say that Ruby Lee’s has given them a unique venue to make a connection with their music.

“It’s so small but the acoustics are amazing and the folks are so passionate,” said Brian Raehm, of Target the Band. “It makes you feel like you’re playing Carnegie Hall when you get that kind of connection with the audience.”

Singleton himself is evolving into a restaurateur, but you can never take the football coach out of him.

“The staff, I know they hate it, they’re always saying this isn’t football and I say, ‘Well I’m glad, because I got fired from there,’” he said with a smile. “But the ideals to what leads to success are the same. Build a great system, believe in your staff, everyone knows their role and everyone is bought into the dream.” 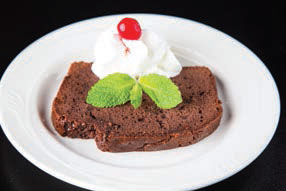 His passion for sports has fit in well, helping him create the vision of his “Sports, Blues and Soul Food” tagline.

“We have eight flat screens and one big screen and we’re always showing the games folks want to see,” he said. The end result of melding his passions has created a family-friendly atmosphere in his own backyard.

“Listen, we’re always tweaking, always working hard to be better and we have a long way to go,” he said. “Folks said to me at first, ‘Folks will never come here.’ They thought we needed sexier real estate. I’m right where I want to be.

“I love that we’re creating a tradition here that gives folks this live entertainment on the North End. It’s safe, secure and it just feels like a place you want to be. I hear it every day and it’s that kind of feedback that keeps me pushing forward. I know we’re on to something here.”