— Before milk-based ice creams were introduced in the 10th century, this summer treat was indeed made from ice.

— Industrial production of ice cream begun in 1851 in Boston.

— It wasn’t until World War II, when U.S. troops brought American-made ice cream overseas, that ice cream was accepted by the rest of the world as a perfect summertime treat

— The largest worldwide consumption of ice cream is in the United States. There, the average person consumes 48 pints of ice cream per year.

— The most popular flavor of ice cream is vanilla, followed by chocolate, strawberry, and cookies and cream.

— Ice cream cones
were first served at the 1904 World's Fair in St. Louis, when large demand forced ice cream vendor to partner with a nearby waffle vendor.

— One dairy cow can produce enough milk for 9,000 gallons of ice cream.

— Sunday is the most profitable day for ice cream sellers.

— Marco Polo introduced ice cream to continental Europe in the late 13th century when he returned to Italy after exploring China. 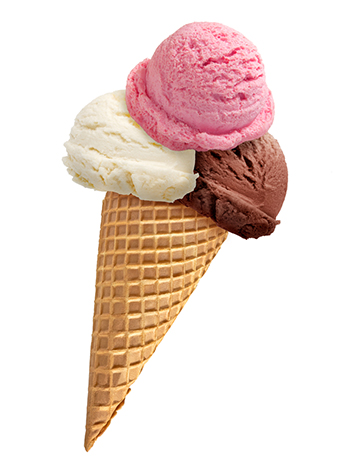 — The United States produces the most ice cream in the world.

— Historians say that Alexander the Great, who lived from 356 to 323 BC, loved to eat snow flavored with nectar and honey.

— Hawaii is a home to an “ice cream bean” — a fruit that tastes like vanilla ice cream.

— California is the largest producer of ice cream in the United States. During 2003, the state produced 121 million gallons of the frozen treat.

— It takes 12 gallons of milk to create one gallon of ice cream.

— Ice cream’s “brain freeze” effect is triggered when cold ice cream touches the roof of your mouth, which causes blood vessels in the head to dilate.

— There are 273 calories in one cup of vanilla ice cream.