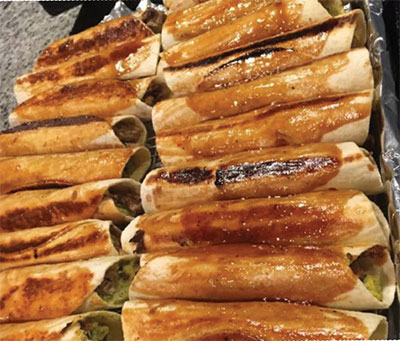 It's an elaborate picnic on wheels — though “elaborate” can mean anything from a beer-filled cooler and wings to to tents, music, grills, big-screen TVs and even swimming pools. But it all begins when a driver parks his or her vehicle in a sea of other vehicles ready to celebrate a sporting or special event where fans put the "fan" in "fanatic." No matter the head count — whether it’s 100 people to 10,000 — tailgating is truly one of the only American sports in which everybody is a winner … well, except the guy who forgot his cooler of beer in the garage.

Husband and wife team Luke and Lizzy McCary and Keith Belfanti are all experts at throwing the perfect tailgating party. In 2013, the three joined forces to launch East Coast Smoke BBQ, an award-winning competition barbecue team. Over the years, they’ve perfected their party prep and are always ready to hop in the car for a good tailgate. Luke likes to be ahead of the curve and invests in state-of-the-art equipment. A recent drum smoker proved to be well worth the investment, and now the team is experimenting with sous-vide, a method of partial cooking by vacuum sealing food and placing it in a water bath or steam environment for hours at lower temperatures.

There is one tailgating tip they all agree on, however: Prepping a day or two ahead of time means there won’t be any scrambling on game day — there’s nothing to do but slather your face in team colors and enjoy the party. Here, the team offers a few other tips to make your tailgate party the best one in the parking lot.

When deciding what food to make, think bite size, they say. Items that are easy to pick up will be the first to go. Plus, you won’t need a ton of plates or silverware. But don’t forget to pack plenty of paper towels and trash bags.

Prepare as much food as possible before you head out to tailgate. Doing so will mean you get to spend most of your time hanging out with friends, not behind a hot grill.

The McCrarys and Belfanti say their favorite way to transport food to a tailgate is using aluminum pans, which have durable tops and are sturdy. Plus, you can stack them in the cooler and save on space. At the end of the night, pack them back up and take leftovers home or toss out the empty ones for easy clean up. Of course, if you’re really trying to impress your guests, pack your tablecloth and serving pieces for a truly impressive spread.

The trio also recommends checking your propane tank before you leave the house. Nothing kills the party faster than getting to the game and realizing your propane tank is empty or you left that vital pair of tongs at home. And in the South, you’d better be prepared for the outdoors. Rain or shine, don’t forget to pack a tent or some other shelter. If high winds are in the forecast, pack four buckets and rope. To secure the tent from the wind, fill the buckets with water and use the rope to tie down.

Also important are sunscreen, mosquito repellent and ant spray. Insects are frequently unwelcome guests, so you may also want to grab a fly cover for your food.

And while it’s not necessarily tailgate related, don’t forget your jumper cables. Without fail, someone will end up with a dead car battery after having all that fun all day.

BBQ Roll-Ups are an easy make-ahead dish and will be the hit of the tailgate. The first stage of the recipe is prepared at home, then it’s finished off on the grill at the tailgate party.

In a medium bowl, mix the softened cream cheese, cilantro, corn and sriracha. Put the mixture in a gallon-size resealable bag and cut the end to turn it into a piping bag, making sure the opening is large enough for the corn kernels to pass through. Lay out flour tortillas and fill with pork barbeque. Pipe on the cream cheese mixture. Roll up, cover with plastic wrap and refrigerate. At the tailgate, warm up the grill and use tongs to place the roll-ups on the hot surface. Lightly brown the roll-ups on one side. Flip and brush with barbecue sauce. The barbecue sauce will caramelize and hold the roll-ups together, but avoid grilling them for too long because the sugar in the sauce means it will burn quickly. 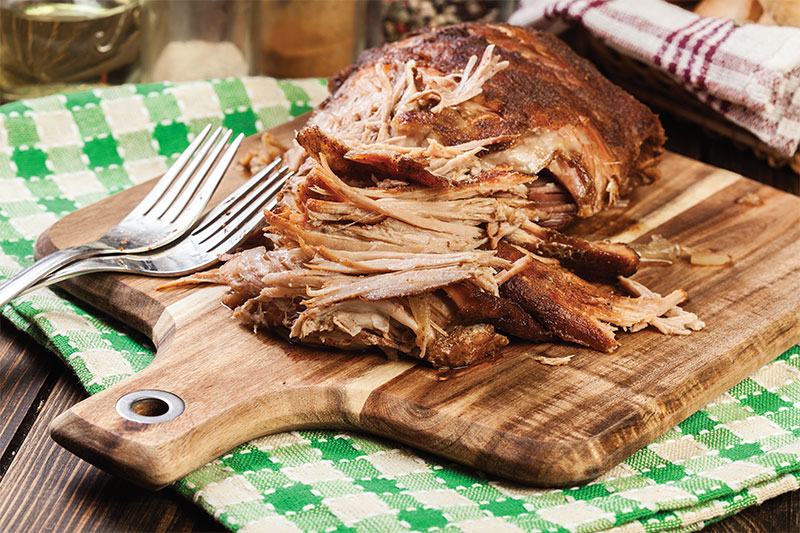 This pulled pork is great in BBQ Roll-ups (recibe below). You’ll also have some extra on hand to make more roll-ups the next day or to make a few tasty pulled pork sliders.

Preheat oven to 300 degrees. Mix cayenne pepper, paprika, mustard, garlic, brown sugar and salt in a mini food processor or mash with a fork in a small bowl until well combined. Place pork butt fat cap side up in a large roasting pan, then rub the mixture on all sides. Roast for about five to six hours, uncovered, or until it falls apart easily. Remove from oven and transfer to a large cutting board. Securing the butt with a large fork, use a second fork to pull away the meat, trimming off any fat.