The flavor of the pecan is indescribably good — this rich, mildly sweet, slightly crunchy, oval-shaped nut is even better when lightly toasted, and it’s quite addictive. Of course, the minute this delicacy was discovered by European explorers foraging here, they whisked pecans off to the West Indies and Europe. As legend has it, it was delicious enough for Founding Father and President George Washington, who at his Mount Vernon estate planted a pecan sapling given to him as a gift by President Thomas Jefferson, also an avid gardener. This gift was ideal, as I imagine the first president was hard to shop for. 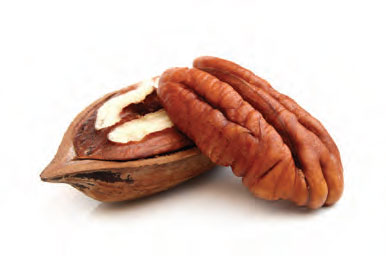 There are over 1,000 varieties of pecans. Many are named for Native American Indian tribes, including Cheyenne, Mohawk, Sioux, Choctaw and Shawnee.

Picturesque pecan groves dot our Southern landscapes and have been cultivated here since the 1800s. Grafting techniques implemented in South Carolina in the late 1800s resulted in a new and improved pecan, which remains a vital crop for many growers today.

Pecans pair well with sugar and make heavenly ice creams, pies and pralines, and serve as key ingredients in savory dishes, from roasts to salads. And of course, no Thanksgiving table would be complete without a pecan pie. They are harvested around mid-October and come in different sizes, including mammoth, extra-large, large, medium, small and midget. National Pecan Day is celebrated on April 14 each year, but as far as I’m concerned, every day is Pecan Day. 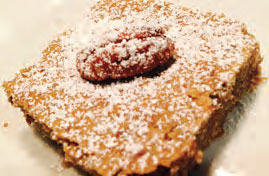 Preheat oven to 375 degrees. Lightly butter and dust an 8-by-8-inch baking dish with flour. In a mixing bowl, combine applesauce, eggs, butter, vanilla extract and corn syrup and beat until smooth. In a separate bowl, stir together ground pecans, rolled oats, flour, cinnamon, black pepper, salt and brown sugar. Fold dry ingredients into the wet ingredients, and then transfer to baking dish. Bake for 35-40 minutes or until lightly golden brown on top. Once cooled, cut into squares, top with toasted pecan halves and dust with confectioners’ sugar.

“Four years ago, the farm yielded 14,000 pounds of pecans here on Lady’s Island. The Southeast is experiencing an off year. Pecan trees are what we call ‘alternate bearing’ trees, so one year you may have an abundant harvest and the next year, the harvest may be cut in half. You would think that some years some would be bearing and others would not be bearing, but they all got the same office memo. My father, Col. James Rathbun Sr., (pictured) was the founder and bought the farm in 1968. Palmetto Brewing Company has named a brew after him called Colonel Rathbun’s Farmhouse Ale, made with our persimmons. We also grow pears, citrus fruits and pomegranates. We sell our pecans at many farmers markets in Beaufort County and to a Lowcountry-based distributor, and our pecans are used by many top chefs.”