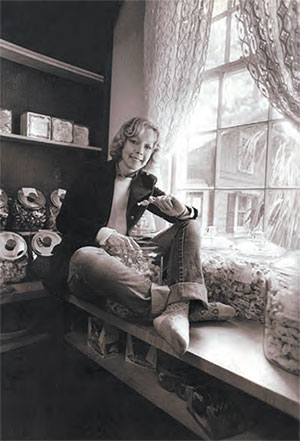 On August 11, Signe Gardo, owner of Signe's Heaven Bound Bakery Cafe will celebrate her 44th anniversary since opening her establishment in 1972 in the tiny (650 sq. ft) lighthouse keeper's cottage in HarbourTown.

Today the petite, blonde 75-year-old doyenne of Hilton Head Island restauranteurs is as effervescent and enthusiastic as she was back in the early 1970's according to friends who knew her in those early Sea Pines days. "It was an exuberant time", Signe recalls from today's expanded facilities on Arrow Road behind the Post Office. "People were visiting HarbourTown from all around the world, and therefore I first named our little cafe: "Signe's World - a World of Good Things."

With the growing celebrity status of both Sea Pines and Hilton Head Island, Signe's was soon discovered by visitors and the media. She was featured in such national publications as Travel & Leisure, Southern Living, The New York Times, and Bon Appetit plus numerous others. She also soon began making expanding her operation to cake-making - especially wedding cakes - and estimates that she has done the honors for more than 7,000 brides. She was honored herself by The Knot and Wedding Wire as being among the best wedding cake providers in America. In 2007 The Hilton Head Island Chamber of Commerce named the bakery its "Small Business of the Year."

"People often ask me, 'Where did you get inspired to do this' "? says Signe with a twinkle in her bright blue eyes. "I say: How do you explain that you feel like you were always intended to do something and you couldn’t imagine doing anything else? Truly, how do you explain that?

"As a little girl, I traveled annually between Connecticut and Florida – throughout all my schooling years. My parents and other relatives were all snowbirds. We caravanned to Pompano Beach along U.S. 1 each December and back up north when school was over. In those days, you only traveled by car pulling a trailer behind. We loaded up all our belongings each time. I was an only child, so it was me and my parakeet in the back seat.

"I drifted between the worlds of my father and mother. My father’s family were old Yankees from Boston and South Dakota. Everything my paternal grandmother put on the table was either burned or boiled. Seldom was anything served any other way. 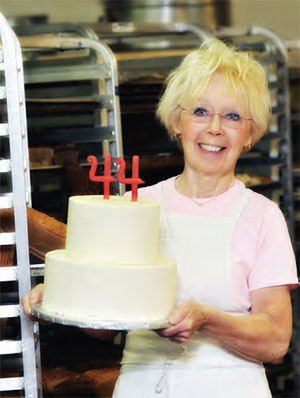 "My mother’s family was Swedish. They lived in a Brooklyn brownstone, and they did the authentic Swedish cooking. I loved the stuff they made. I remember eating smorgasbords. They made real jellies, and nice things that required a lot more work than people like to do these days.

"For me, traveling always meant tasting. Traveling back and forth from north to south, and back again, between the extended family of Swedes I was constantly tasting.

I nibbled, tasted, sampled and experimented with the flavors, and never grew tired of it. My first cookbook consisted of magazine clippings, hand sewn together. I made the book from favorite recipes I discovered in Good Housekeeping, Redbook and a few others. I started calculating the proportions in recipes and then began making my own. I believe the Lord really started it all in me way back then.

"My mother would give me free reign to bake. It kept me occupied while she worked the night shift as a telephone operator and it made my relatives happy. We always had cake in the refrigerator – under a special cake cover. I would make sure of it by making something new every day. It was like I was keeping a special surprise in there, like a secret handshake I could take out whenever I wanted and share it with someone.

"As soon as I came home from school, I immediately had a glass of milk, a piece of whatever was under the cake cover, and would share it with my father, my grandfather or someone else in the family. Then I would bake something else. I might bake marble chocolate cake one day, lemon cake the next and then I might go find berries to make something totally different.

"When I was in my very early twenties, my passion for cakes and food continued. I lived in Germany, in Munich, or what is called Bavaria. We lived there over a year, and I went to a particular little cake shop every day it was open. The cakes sat expectantly on the shelves of this beautiful long glass case, like presents waiting to be opened. When I stepped over the threshold into the shop and saw those beautiful cakes I was giddy. Every day I looked forward excitedly to the surprise of what I may taste. Every day I would order a slice of something new.

"I still remember those wonderful moments sitting alone at a small polished table in a finely carved wooden chair, dissecting the flavors, examining the textures and dreaming about having a glass case of my own one day, where people would order slices of cake I had made."