It’s summer, which means that it’s hot as all get out right now. Logically, it stands to reason that you’re on the hunt for something that will not only cool you down, but will also give you the rare opportunity to coat something in sprinkles.

But wait, sweet tooth-enabled readers. Don’t just jump right into the nearest ice cream parlor unprepared. There are options to weigh. And those options offer up such an array of completely unique experiences that (surprise, surprise) no less an authority than the federal government has stepped in to differentiate them.

Old reliable. The oldest player in the frozen treat game is still the strongest. Spin it in any flavor imaginable, mix it up with some fruit or some candy bar chunks, whatever you want. Since William G. Young first cranked out treats from his patented Johnson Patent Ice-Cream Freezer, ice cream has dominated dessert talk for more than a century.

The smooth alternative to ice cream, custard gets its signature thick, creamy appeal from the way it does away with the air and brings on the eggs. Take your basic ice cream, add some egg yolks and whip until it’s ready, and you’ve got the dessert treat that even Barry White would say was smooth. And that man knew smooth. 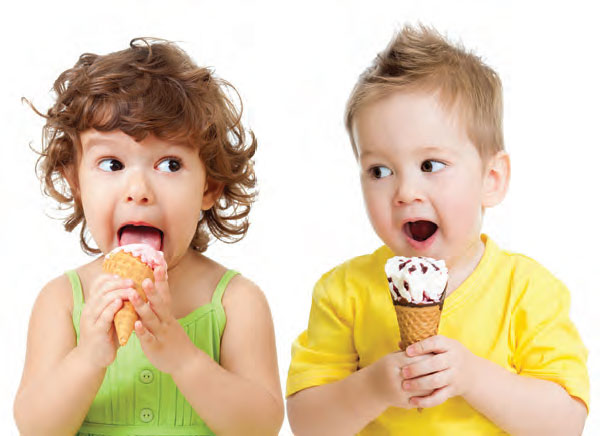 Legend has it that sorbet was invented by emperor Nero when he had runners bring him buckets of snow that he then mixed with honey and wine. While the history is unclear, what is clear is that mixing snow, honey and wine sounds gross. Fortunately, those more gifted in the culinary arts soon introduced sorbet, which combines frozen, sweetened water and liquor. When the dessert made its way to America, we swapped the liquor for cream and the result was a tasty, low-fat alternative to ice cream.

We like to imagine whoever wrote this attempting to classify “honey and liquor mixed with snow.”

Picture frozen yogurt as ice cream’s athletic, gym-rat cousin. Offering up all the flavor with a fraction of the fat, frozen yogurt, aka “froyo” aka “frogurt” has been letting us indulge without as much of the guilt since the 1970s. The popularity of this high-culture treat (see what we did there?) exploded in the ’80s and ’90s, and today it makes up a significant amount of the market.

WHAT THE FEDS SAY:
They’re surprisingly mum, although the California Department of Food and Agriculture maintains a legal definition that frozen yogurt cannot be mixed on-site and must contain 10 million cultures per gram, two legal caveats that made popular chain Pinkberry have to stop calling their product frozen yogurt. 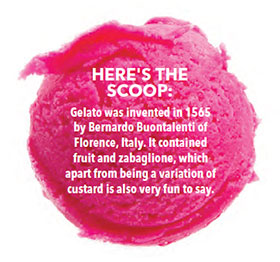 If froyo is ice cream’s athletic cousin, gelato is the sophisticated European one. That’s due to both its Italian ancestry and its lower fat content. Gelato and ice cream share the same ancestry, but the key difference between the two stems from gelato’s higher amount of whole milk to cream, which lowers the fat content and also brings out the flavors. And, in European tradition, it’s churned slower than ice cream, which keeps air out and makes a smoother treat.

WHAT THE FEDS SAY:
“This product is characterized by an intense flavor and is served in a semi-frozen state. Gelato contains sweeteners, milk, cream, egg yolks and flavoring.”

A look at some of Hilton Head Monthly’s favorite frozen treat flavors: