These mushrooms are highly sought after in Japan and are even presented as wedding and corporate gifts. The matsutake is known more for its distinct aroma, and can be foraged if the rabbits, squirrels and deer don’t beat us to them. The great news is there is a species which also grows in North America so we don’t have to jet over to Tokyo to try them! 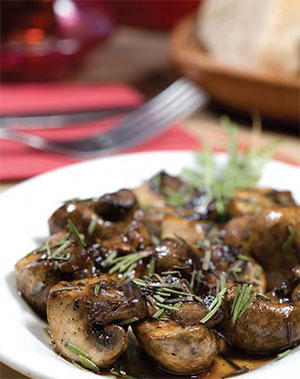 This ragout has so many different uses: it can be served as a side dish, in omelets, over roast chicken, or with vegetables over rice. Oyster mushrooms (oh, that’s so Lowcountry!) or other types of your favorite mushrooms can be substituted for those used in this recipe.

Heat 3 tablespoons olive oil in a medium heavy skillet. Sauté onions on low heat, stirring often, for 15 minutes then stir in half vegetable broth and continue cooking for 3 minutes on high heat, continuing to stir often. The onions will turn dark golden brown as they caramelize — scrape the bottom of the skillet to avoid burning. Remove onions from skillet and set aside. In the same skillet, lower heat to medium then heat the remaining olive oil and sauté the sliced mushrooms for 20 minutes. Place a few tablespoons of warmed broth in a small bowl, whisk in the cornstarch and then stir into the mushrooms. Stir in the remaining vegetable broth and simmer until all the liquid has cooked out. Return caramelized onions to the skillet. Stir in the Madeira port, turn up the heat, stirring often, until the port has cooked out, about 10 minutes. Salt and pepper to taste.