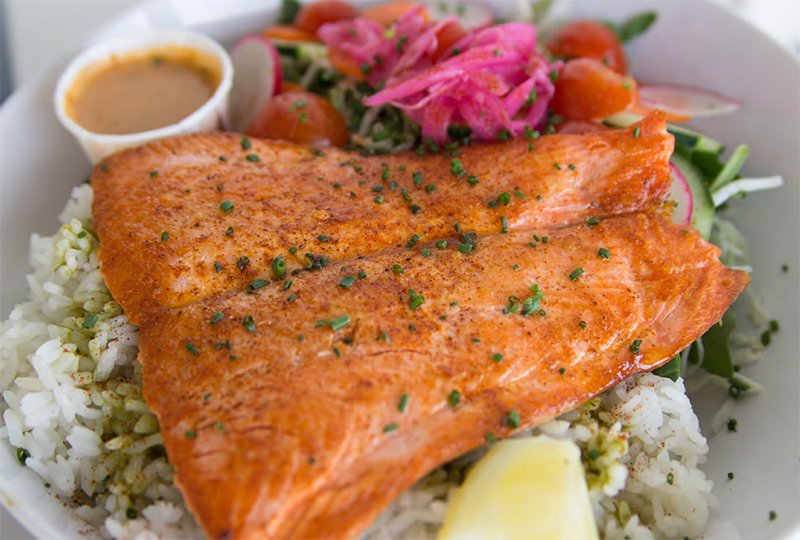 A new seafood restaurant with an unusual name and a menu inspired by its food truck origins is now open on Hilton Head Island. At the bustling corner of Arrow Road and William Hilton Parkway, the restaurant offers healthy, affordable, chef-crafted food in a completely remodeled space inside the building that formerly housed The Pantry gas station.

Slapfish’s cravable menu features shrimp, fried or grilled fish served in sandwiches, tacos and salads, along with New England clam chowder and fish and chips. Slapfish’s specialty dish is a lobster roll. Less traditional offerings are the Chowder Fries, which are fries smothered in clam chowder and bacon; the Surf and Turf Burger that includes lobster, cheese and caramelized onions; and the Clobster Grilled Cheese, a sandwich stuffed with crab and lobster. Other popular items include grilled shrimp burritos, and—on the lighter side—lettuce-wrapped fish tacos.

The fast-casual seafood restaurant chain was founded in 2011 by celebrity chef Andrew Gruel. Based in Orange County, California, the transplanted New Jersey chef’s concept started as a food truck and aims to evoke the “classic seafood shack.” The eatery’s“ridiculously fresh” sustainable seafood has been recognized on the Cooking Channel, the TODAY Show, PBS and featured in The Wall Street Journal, Men’s Health, Food & Wine Magazine, Entrepreneur, and Restaurant Business, among other media outlets.

The largest and fastest growing fast casual seafood franchise in the world,Slapfish’s website lists locations in 10 states, the District of Columbia, London and Dubai. The nearest location is in Pooler and the company has said that multiple locations in South Carolina and Georgia are in the works. Open Mon-Sun 11 a.m.–9 p.m.