A tasty dish for young and the young at heart. 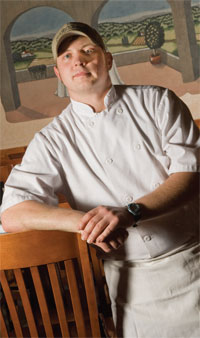 Dining out with children is usually a matter of compromise. Adults want something truly delicious that will tempt their tastebuds. Kids, generally, just want to play with their food. At Carrabba’s Italian Grill, everyone gets what they want, young and old alike. For the adults, there’s tasty cuisine like the Chicken Gratella presented here.

For the kids, there’s roll-your-own-dough, letting them play with their food without the mess. Call Carrabba’s Italian Grill at (843) 785-5007. 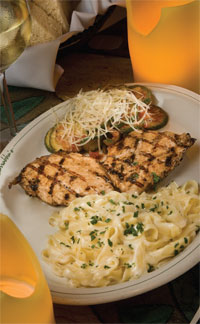 Season chicken liberally with Step one seasonings, then baste chicken liberally with one of the two halves of the Step two mixture. Place chicken on heated grill (approx. 500º F) at a 45-degree angle. Turn the chicken to the same side at the opposite angle and constantly baste. When chicken has been flipped, baste with the second half of the Step two mixture so you are not basting the cooked product with the baste from the raw product. Cook to an internal temperature of 160º.