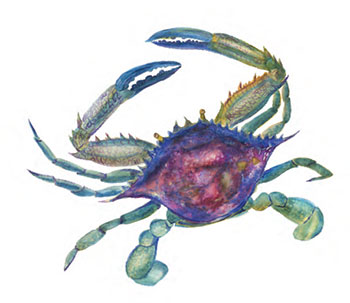 “I used to come home from school and say that I wasn’t going to do it, I wasn’t going to get my hands dirty,” said lifelong Daufuskie resident Ernestine Smith. “But my mom would say, ‘Wash your hands and get your towel, pan and knife.”

And that would be that.

A talented cook at Daufuskie Island Crab Company, Smith’s deviled crab dish is legendary on Daufuskie. Her recipe is a closely guarded secret, but she is willing to share one key ingredient:

That’s a sentiment echoed by Sallie Ann Robinson, a chef and Gullah expert. But she also remembers the practical side of the deviled crab production in her house: “I remember many days were this was our parent’s income,” she said. “This was our way of life. We sold crab to put food on the table, and it was a part of our daily life when money had to be made.”

Ella Mae Jenkins’ family sold deviled crabs from the store on their family’s property, where they also sold a selection of ice cream and peanuts to those traveling on Haig Point Road. Jenkins was born in a small house that still sits next to her current home and rarely left the island until her seven children moved away for work. With her son Roy visiting from Hilton Head Island, she would only agree to reveal one ingredient in her delicious crab recipe. 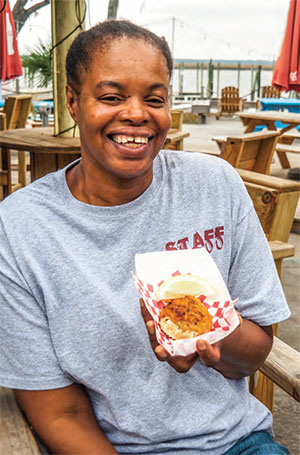 All three women remember their mothers making deviled crabs for the tourists coming over on the boat. In fact, it seemed the travelers were flocking to the island from Hilton Head and Savannah in droves to purchase the delicacy, as well as homemade wine and boiled shrimp, often sold from Daufuskie residents’ homes. The women would work in the kitchen, balling the crab mixture and pressing it into cleaned crab shells to bake, browning the tops to a crisp crust.

And while there is no one official Daufuskie deviled crab recipe — each family has its own recipe, with its own special ingredients — the various recipes do have a few things in common. All agree that the crab must be the focus, with very little or no added breading. However, the breading can be sprinkled on top and toasted, if the chef prefers. The deviled crab should be baked or broiled, but not pan-fried like other versions. And just as the name “deviled” suggests, a bit of spice is used to give the crab mixure a little kick.

And just as no two deviled crab recipes are the same, no two stories about the dish’s origins are the same, either. According to one version, the dish came about when a woman, while cooking for a party, decided to use up all her extra ingredients, while another tale suggests the dish originated with an exceptionally creative home cook. Regardless, Robinson is convinced of the dish’s importance: “It’s more than just famous. It is a cultural history that’s been around for many years.” 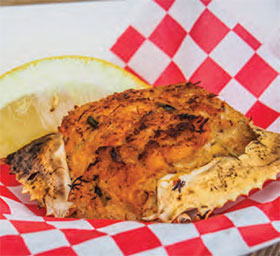 For the crab mixture:

Preheat your oven to 400 degrees. Mix the crab ingredients together and divide into 10 portions that are roughly the same size. Roll each into a ball and press firmly into a ramekin or clean crab shell. Dot the tops of the crab mixture with butter and sprinkle with breadcrumbs.

Bake for 15 minutes or until browned.