The best bumper sticker seen in the Lowcountry reads: “Friends Don't Let Friends Buy Imported Shrimp,” and we mean it. The sight of the double-rigged shrimp trawlers going out at dawn for the catch in our pristine waterways, with flocks of hungry sea birds hovering about to see what they can pluck from the catch is quite common. We in the Lowcountry feel the pride of watching this shrimping industry still thrive today, both here and in small South Carolina towns like McClellanville, keeping alive an integral part of the history of our coastal paradise. Many a shrimper, typically coming from a long line of shrimpers, will say it’s in his or her blood. We cannot help but make the association of the shrimp with the shrimpers, and we thank them every day for bringing us this delicacy, despite facing fierce competition from imports, rising costs and economic and safety risks.

South Carolina’s history with shrimp is cooked up in the form of rice-based shrimp pilau (also spelled “perlou” and “perloo”), Lowcountry boil and Frogmore stew, named after Frogmore, a historic community on St. Helena Island. A simple bowl of steamed shrimp with hush puppies hits the spot, too.

Poet Ogden Nash wrote on the trials and tribulations of the dating life of shrimp: 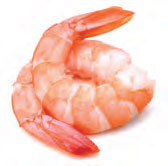 “The Shrimp”
A shrimp who sought his lady shrimp
Could catch no glimpse
Not even a glimp.
At times, translucence
Is rather a nuisance.

I created this recipe for my friend Campbell Goss, who loves being on the water and fishing more than anything else.

NOTE: We opted for quick grits here, but stone-ground grits are the classic way to go.

FOR THE CARAMELIZED ONIONS:

In a medium heavy skillet, heat butter and olive oil, then add onions. Bring to a simmer, covered, for 10-15 minutes on low heat, stirring occasionally. Add orange juice, salt and pepper and continue to simmer for 10 more minutes, uncovered, over low heat, stirring frequently. As the liquid evaporates, the onions will be nicely caramelized.

FOR THE CHIPOTLE GRAVY:

Melt the butter in a pot over medium heat. Whisk in flour and when mixture begins to bubble, lower the heat, stirring occasionally. The mixture will turn a light brown, forming a roux, after about 20 minutes and will have a pronounced, nutty aroma.  Slowly whisk in the hot vegetable or chicken stock, chipotle peppers and salt, stirring until the roux is smooth. Simmer on low heat for 15 minutes then stir in caramelized onions. The gravy consistency will not be thick.

Using a heavy-bottomed stock pot, bring water, vegetable stock, half and half, butter, salt and pepper to a boil, add grits and reduce heat to low. Whisk steadily until grits and liquid are combined. Cook, covered, for 8-10 minutes, stirring frequently to prevent grits from sticking to the bottom of the pot. Add salt if needed. Remove from the burner, cover, and set aside until ready to use.

In a sauté pan, heat butter until sizzling in pan. Sauté shrimp over medium-high heat for 2-3 minutes or until light pink, and then season with salt, pepper and fresh parsley.

TO SERVE: Spoon the grits into individual serving bowls, make a well in the top with the back of a small ladle, arrange the shrimp on top, then ladle the chipotle gravy over the shrimp. Garnish with additional fresh parsley. 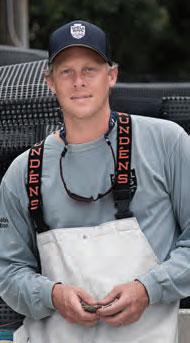 By Andrew Carmines, Hudson’s Seafood House On the Docks

Shrimp is the No. 1 seafood on American plates. The average American consumes 4 pounds of shrimp annually. When someone from Des Moines, Iowa, reads that statistic, they probably think the number seems high. When Lowcountry folks read that number, the response is often, “I ate four pounds of shrimp last week.” Safe to say, we are doing our part to bolster the average, and rightfully so. Our white shrimp in South Carolina command the highest price in the marketplace because they are the best-tasting shrimp in the world.As proud citizens of the Lowcountry, it is our job to know the difference and demand the good stuff. If South Carolina’s history was built on rice, then Hilton Head Island’s history was built on rice with fresh white shrimp and brown gravy on top!