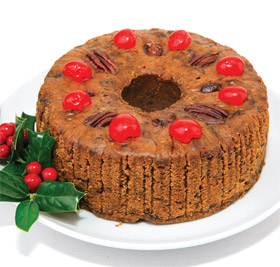 Poor fruitcake. Long the butt of jokes about its density and impressive shelf life (some people make them a year ahead and “feed” the cake with liquor to preserve it and enhance its flavor), it’s possibly the most maligned of desserts. Originating in Roman times, fruitcake was outlawed in Europe in the early 18th century because it was considered too “sinfully rich.” Now, thanks in part to Johnny Carson’s claim that there is, in fact, only one fruit cake in all the world, being passed along from one grossed-out person to another, urban legends abound of some sweet old grandma/aunt/neighbor giving a fruit cake gift that’s then pitched out, re-gifted, or stored away and forgotten, holiday after holiday, too terrible to die.

But fruitcake can be delicious. Try these variations on traditional fruitcake from two accomplished Southern bakers, and you may find yourself eating it year-round — and even giving a gift that will shatter the recipients’ prejudices forever!

The namesake of Signe’s Heaven Bound Bakery pulled her signature fruitcake from a handwritten recipe book she started in 1953.

Cream brown sugar and butter until fluffy. Add each egg one at a time. Sift dry ingredients together and mix into the batter mixture. Add fruit, nuts, and chocolate chips.

Mixture will be very tight and sticky. Press into a greased bundt pan. Bake at 325 for 1 hour. Decorate with pecan halves and cherries. Soak cake in rum or grand marnier while it is still hot.

The secret to this fruitcake may be “more nuts and bourbon, less fruit.” This recipe has been passed down through the generations, since at least the 1940s, but no one ever passes up a piece (or two). Ensuring that the cake remains moist offers ample opportunity for a little nip for the baker now and again. The further in advance you can make it, the better, because the longer it’s stored, the tastier it is!

Cut two layers of brown paper and 1 layer of wax paper to fit sides, bottom and tube of a tube pan, extending paper 1 inch above pan edges. Grease first layer of brown paper, then top with second layer. Top these with greased wax paper layer, then place in pan.

Beat egg whites with a few grains of salt until stiff. Fold into mixture. Pour batter into pan. Let stand 10 minutes. Place pan of water in the bottom of oven for steam. Bake at 275 for three hours, until browned. After 30 minutes, place candied cherries and pecan halves on top of cake for decoration.

Cool in pan at least 30 minutes. Remove and place chopped apple in the center of cake. Cover with a cloth and soak in bourbon. Store in an airtight container in a cool place for four weeks, adding bourbon every 2-3 days, whenever it has soaked into cake.