Tim Reynolds moved to Hilton Head in the fall of 1999, planning to stay for a few years. Later this month he’ll say goodbye to the reason he never left.

On May 29 following the America Sings! Memorial Day concert, he’ll retire his baton after directing the Hilton Head Choral Society for 20 seasons.

“Right place, right time, right dynamic,” he says of his decision in June 2000.

Like many transplants to the area, Reynolds first came as a visitor. His host, Charles Farley, a former colleague at Knox College, was the accompanist for the Choral Society and often invited Reynolds to sit in on rehearsals. 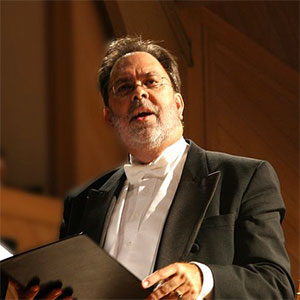 “I had this relationship with the Choral Society for a couple of years,” he says. “So when I moved here, I started singing with them and wound up running a bunch of rehearsals. The job grew out of that.”

His position, like the group, kept expanding. Over the course of three years, he went from being part-time director to full-time artistic director. Two concerts a year mushroomed into six, and special guests like the Vienna Choir Boys came to town as part of a series Reynolds developed called Hilton Head Choral Society Presents.

He also created a youth choir and a select chamber group. Each lasted about five years.

“You have to try different things at different times and see what floats,” Reynolds laughs.

The Choral Society, which grew from a handful of people responding to a message on a community bulletin board, now boasts between 75 to 100 members.

Thanks to Reynolds, the group has performed in Europe twice, and two years ago members of the group joined him on a non-singing tour of Switzerland.

“Travel has always been the other hat I wear,” he said. Add social director to his repertoire too. Boisterous by nature, Reynolds never tires of gathering everyone for food, drinks and conversation. Retreats and “after glow” parties (to celebrate performances) are routinely added to the group’s schedule.

“Singers are typically very cordial, social people,” he says, detailing how he once organized an impromptu hurricane party after discovering that he and several choral members had evacuated to the same hotel.

“I’ve learned to go with the flow,” Reynolds shrugs, explaining how he’s dealt with everything from rescheduling concerts because of hurricanes to canceling two entire seasons due to COVID-19. There was the concert when a singer left the stage on a stretcher and the season when the group nearly went bankrupt.

Nevertheless, Reynolds kept expanding the vision for the Choral Society, which is celebrating its 45th anniversary and holds the distinction of being the oldest performing arts organization in the area.

“We’re unique,” Reynolds said, “because we let you sing however many concerts you are here for.”

Auditions are not required, but members must attend 75% of rehearsals.

Directing rehearsals in bold Hawaiian shirts, Reynolds is hardly relaxed. His quest for perfection can seem “demanding” and “intense,” but members are quick to embrace his coaching abilities and sense of humor.

“He’s the consummate musician,” says Janice Creech, who has been the group’s accompanist since 2010. “He knows the voice so well and can tell you exactly how to get the sound that’s required — and he handles it all with humor and support.”

She’s also quick to extoll Reynold’s caring nature. After the death of her 27-year-old daughter, Sarah, Creech says, “He was such a great support system and made sure I stayed involved with music, which was so healing.”

Reynolds also commissioned a piece by Broadway composer Georgia Stitt to honor Sarah that was performed by the Choral Society in 2014.

Bill Thorpe, who joined the choral group six years ago without any prior singing history, confesses he was scared at first. Now, he can’t say enough about the maestro.

“He looks at a piece of music and sees not just notes but intonations, meanings and crescendos — even how you should hold your body,” raves Thorpe. “We’re going to miss him. He’s been a real asset to the community.”

Perhaps fate is trying to stall Reynolds’ departure, as the final spring concert slated for April, was canceled due to a sudden COVID-19 outbreak. It’s now rescheduled for May 13 at 7 p.m.

No doubt every mile will be filled with the music and memories of the past two decades.