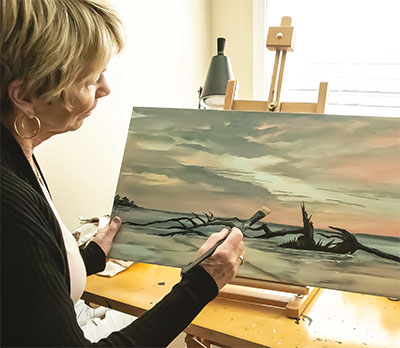 For Marianne Stillwagon, becoming an artist was never about following a straight line.

“I was always a creator,” she laughs, admitting that she loved being a Girl Scout because, “we were always making things.”

Painting and playing with colors made Stillwagon happy, but when Douglas College, part of Rutgers University, offered her a full scholarship, her mother refused to let her go unless she promised not to major in art.

Her mother feared she’d end up on a street corner trying to make a living, so she majored in microbiology.

A year later, unhappy with her choice, she put her studies on hold. Marriage and raising two sons followed. Eventually, Stillwagon pursued a degree in graphic design.

“I LOVE EXPERIMENTING WITH COLOR,” STILLWAGON SAID. “SOMETIMES  I THINK IT’S AN  OUTLET OF MY MOOD.”

As a freelancer, she poured her talents into creating hand-drawn ads and designs, but when computer software made her skills unnecessary, she said, “Okay, I’ll paint.” 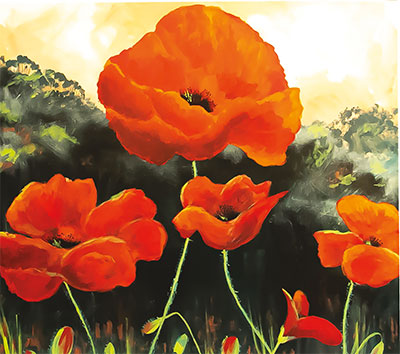 Her husband became her biggest cheerleader, always promoting her work, even to strangers.

Residing in New Hampshire at the time, she put her training as a designer to use, depicting the colonial towns and snowy villages surrounding her in a style she calls, “Contemporary Primitive Americana.”

Embraced by the New Hampshire Art Association, she garnered a loyal following and became a full-time, recognized artist.

Life changed drastically in 1995, when her husband had a massive stroke. Committed to being his primary caregiver, Stillwagon often rose at 5 a.m. to find a few hours for painting before tending to his needs.

Six years ago, the couple relocated to Hardeeville for half the year to escape New England’s cold winters. Stillwagon decided it was the perfect time to branch out and do something different. 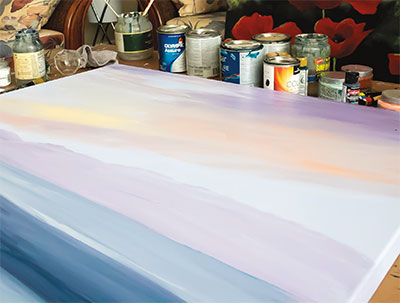 “I morphed into being freer,” she says, adding that she found a receptive audience at local shows like the Art Market at Historic Honey Horn and the Shelter Cove Festival.

Her work, “Reflections of The Lowcountry,” was featured at the Society of Bluffton Artists gallery in January.

Inspired by photos she’s taken, Stillwagon works only in acrylics. Her palate often includes soft tones like seafoam green or misty blue, but her collection of poppy-filled canvases burst with rich reds and hints of orange.

“I love experimenting with color,” she said. “Sometimes I think it’s an outlet of my mood.”

Shrugging at the need for rules, she paints when she’s inspired and walks away when she’s not. She’ll use tubes of paint as readily as gallon cans from the hardware store, though she rarely uses an easel. Instead, she places canvases on the coffee table in her studio, located atop a short flight of stairs from her living room. 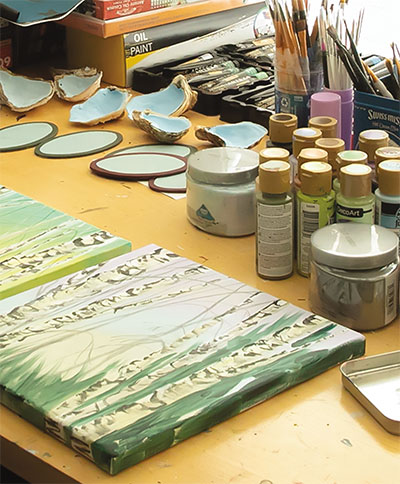 Kneeling or standing, she works as long as she’s “in the zone,” often skipping meals and refusing to take breaks.

Art fills her home, much of it her own. From canvas floor cloths bearing flower blossoms to bold abstracts highlighted in metallic paint to contemporary depictions of palm trees and deserted beaches, Stillwagon’s creations reflect the beauty of the natural world.

Her latest obsession is painting skyscapes, something she attributes to her husband, who passed away in September. With every stroke, she feels his influence.

“Everybody has their own pathway to follow in art,” she reflects. “And sometimes you get inspiration from places unknown.”