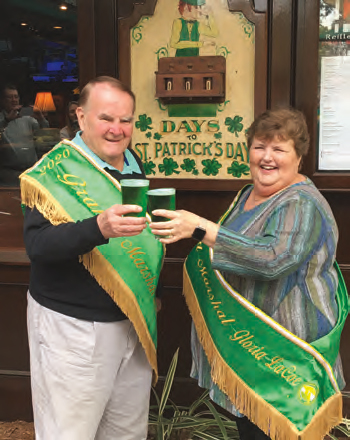 Officially, St. Patrick’s Day is March 17, but Hilton Head Island likes to get a jump on the celebration. More than 25,000 people are expected to line Pope Avenue on March 15 for the annual parade — one of the oldest in honor of St. Patrick in South Carolina.

This year, the parade committee has selected Gloria and Allan LaCoe as grand marshals. The philanthropic couple, who are both Realtors, have been recognized for their involvement with local nonprofit organizations and institutions such as Main Street Youth Theatre, The Children’s Center, St. Andrews By-The-Sea United Methodist Church, the Island Recreation Center, and the Southern Coast Heart Ball. The pair also helped to establish another beloved island tradition: the Thanksgiving Community Dinner at Hudson’s Seafood House On the Docks.

Following the LaCoes — in their traditional bright green sashes with gold fringe — along the parade route will be colorful floats, plus golf carts, horses, dogs and, of course, boats, for a touch of Lowcountry spirit. Businesses and nonprofit groups go all out with their decorations and costumes to compete for awards like the Grand Marshal Award for Best Small Business Float, the Shamrock Award for Best Nonprofit Float, the Leprechaun Award for Best Youth Float and the Irish Heritage Award. 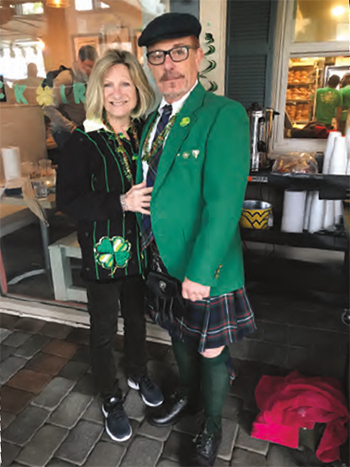 The Battery Creek High School band will also march down Pope Avenue, along with bands from Sol C. Johnson High School and Savannah High School in Savannah, the Williston-Elko Drum Line from Williston, and the band from Bishop Moore High School in Orlando, among others from all over the Southeast.

And of course, it wouldn’t be a St. Patrick’s Day parade without bag pipers.

Many area restaurants are joining the celebration acting as parade sponsors and will feature food and drink specials. The Sandbar Beach Eats will serve up a bloody mary bar, while Carolina Coffee & Crumbs will offer Irish Coffee. Meanwhile, locals know that Reilley’s Grill & Bar — an island institution since 1982 — is the prime place to join the party, both during and after the actual event.

And before the parade, Coligny Plaza is sponsoring a Facebook Live show featuring local celebrities and parade dignitaries and hosted by Leslie Richardson, owner of Coligny Plaza; Lee Lucier, COO of The Richardson Group; and Heather Rath of Heather Rath Consulting. Tune in from 10 a.m. to noon; for more information, go to colignyplaza.com/events. From noon to 3 p.m., the Matt Brantley Band will be performing at Coligny Plaza in the parking lot between Frosty Frog and Sandbar Beach Eats.

The Hilton Head Island St. Patrick’s Day Parade will be held from 3-6 p.m. March 15. The parade route begins at the south end of Pope Avenue at Coligny Circle and proceeds north, turning left onto Office Park Road and ending at The Courtyard Building across from Park Plaza. Admission is free and well-behaved, leashed dogs are permitted. Bring sunscreen, water and charged cellphones. For more information, go to www.hiltonheadireland.org.