Almost every church prides itself on being friendly, but one Bluffton church is officially a “welcoming congregation.”

Unitarian Universalism is a liberal religious tradition that values people of all races, ethnicities, sexual orientations and gender identities. The Welcoming Congregation Program — with its slogan “Standing on the side of love” — is a volunteer initiative to help congregations take intentional steps toward the LGBTQ community.

It’s just one way the Unitarian Universalist Congregation of the Lowcountry focuses on social justice.

The church is very involved with the Lowcountry Immigration Coalition, and volunteer committees also help homeless families, advocate for safer gun laws, protect animals and stand up for the environment — all part of the seven principles of Unitarian Universalism. 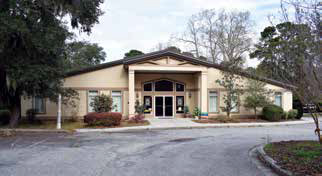 While the religion doesn’t have a creed or require that members believe in God, “UUs” are united around the values and moral compass expressed in these guiding principles.

“We believe in the inherent worth and dignity of all beings,” said UUCL board president Lynne Norenberg said.

Other tenets endorsed by this centuries-old religious tradition: justice, equity and compassion in human relations; acceptance of one another and encouragement for spiritual growth in our congregations; and a free and responsible search for truth and meaning.

Unitarianism emerged in early modern Europe from those who rejected a Trinitarian theology in preference for the doctrine that God was one. By the 19th century, however, the Unitarian church had become a place for intellectuals who were skeptical of belief claims but who wanted to have faith. Charles Darwin, for example, was a Unitarian. The modern Unitarian Universalist Association’s statement of principles does not mention God at all. Today, the denomination is one of the fastest-growing in the country, ballooning 15 percent over the past decade as other established churches shrunk.

Instead of a religious doctrine or creed, folks at UUCL are seeking community. Freethinkers and intellectuals share the pews with young parents, college students and recently retired Northern transplants looking for other liberals. There also are many atheists, agnostics, and theists of all types within the church’s membership.

They come because they want to sing together, hear interesting talks by religious and civic leaders, and think about improving themselves and helping other people.  The church also has a book club and groups devoted to mediation and art and has hosted yoga classes. It also allows community groups to meet in its rooms, including Narcotics Anonymous, Lowcountry Indivisible, Weight Watchers, Compassionate Friends and the League of Women Voters.

And about twice a month, the church’s sanctuary is transformed into an affordable, intimate and family-friendly listening room for Music on Malphrus. The concert series has include folk, Americana, blues and acoustic rock.

Sunday services are similarly laid-back. They are a time to gather, reflect and hopefully learn something new. Throughout each year, many speakers, including UUCL’s own Rev. Jim Morrison, present talks and sermons about varying topics.

Morrison was first a Baptist minister, then a Methodist minister and finally chaplain at Hilton Head Hospital for 14 years before becoming UUCL’s minister last year. He was drawn to Unitarianism because he liked the idea of members supporting each other through their individual spiritual journeys.

“I want the services to be uplifting, and I want us to continue on the path of discovering how we can make this world a better place,” he said.

Unitarian Universalist Congregation of the Lowcountry’s Sunday services begin at 10 a.m. Childcare is provided. The church is at 110 Malphrus Road in Bluffton. For more information, go to uulowcountry.org or email uucl.office@gmail.com.