THE TIMELESS ALLURE OF “THE BOTANICAL FAINTING COUCH

“Fainting couches” were in vogue during the Victorian era, when women laced their corsets so tightly that it restricted their breathing, leading to a lack of oxygen and fainting. These women needed to somewhere to sit down fast.

“Victorians were also obsessed with botany. It was a popular hobby,” said Sarah Peters, the artist behind the bronze “The Botanical Fainting Couch” sculpture. “People would go out with their nets and find specimens to press into books. Besides this inspiration, I have been a lifelong fan of Edward Gorey. I have admired his iconic illustration of a woman fainting on a couch that he created for ‘Masterpiece Theatre.’ ” 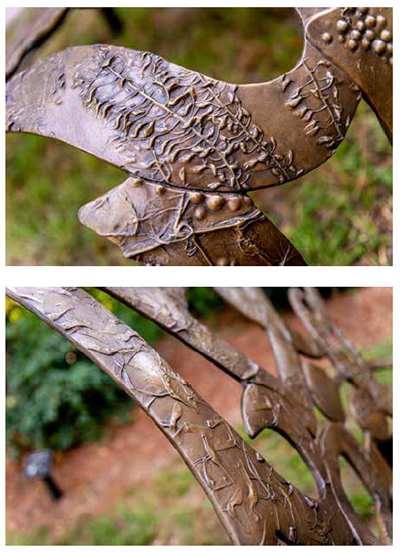 “The Botanical Fainting Couch” evolved organically from Peters’ fascination with Victorian botanists and Gorey’s witty illustrations. It is a 420-pound, 9-foot-tall bronze sculpture featuring an intertwined alphabet of botanical textures from A to Z.

Each letter represents the scientific name or genus of a plant. A is for Acer, B is for Begonia, C is for Comptonia, and so on. The surface of each letter features a 3-D impression of the plant’s texture that can be touched and explored. Visitors can also sit and lounge on the artwork — but no standing or climbing, Peters says.

“I first thought of using the plant’s common name, but I live in a scientific community and that’s not how horticulturists and botanists speak,” Peters said. “No matter where you are in the world, you can use the botanical Latin genus to identify a plant. I worked with botanists at Harvard to investigate and name the plants scientifically.”

Peters, who lives in the coastal town of Falmouth on Cape Cod, said that “The Botanical Fainting Couch” is also an educational piece that provides opportunities to teach young people about botany, as well as the creative skills of a working artist.

“I used wood and wax to form the structure of the chaise,” Peters said. “Then I created the letters out of wax, investigated and gathered plant specimens from around the country, and made deep impressions of the plants with a slab roller pressed into a giant wad of Play-Doh. The whole process took four years.”

Peters had trouble finding a botanical genus for the letter K. Then she discovered Krascheninnikovia, a flowering sage-green shrub commonly known as “winterfat” and found in semi-desert mountainous regions. She traveled to Denver to research and gather samples of the shrub, which is named after the famous Russian naturalist Stepan Petrovich Krasheninnikov, who died in 1755.

“While I was in Colorado, I also went up to Pikes Peak to investigate a plant to represent the letter X — Xanthoria, which was a challenge. It’s a really cute yellow lichen with tiny orange cups,” Peters said.

“M is Metasequoia, the ancient dawn redwood tree native to China. Harvard University's Museum of Natural History displays a 10 million-year-old Metasequoia fossil found in a cave in China,” Peters said. “It was thought to be extinct, but 80 years ago biologists in China discovered a grove of Metasequoia trees, and arborists in Europe and North America made a concerted effort to distribute the seeds. Today, there are forests of Metasequoia trees.”

“The Botanical Fainting Couch” is on exhibit through Jan. 31 at the Coastal Discovery Museum as part of the 2018 Public Art Exhibition. The Community Foundation of the Lowcountry funds the annual exhibition and purchases one sculpture for the Town of Hilton head Island each year. So far, the foundation has acquired and installed 10 sculptures around Hilton Head, including the bronze sculpture of Charles Fraser at Compass Rose Park.

Peters studied fine art at the Pratt Institute, and her work is displayed in collections around the world. The mother of two sons, she is a lifelong artist who enjoys working in multiple mediums.

“But I am happiest solving large creative problems like ‘The Botanical Fainting Couch,’” she said. “I hope it will be a catalyst for viewers to learn more about the plants around them.” 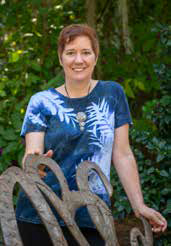 “The Botanical Fainting Couch” by sculptor Sarah Peters is an ABC list of plants: