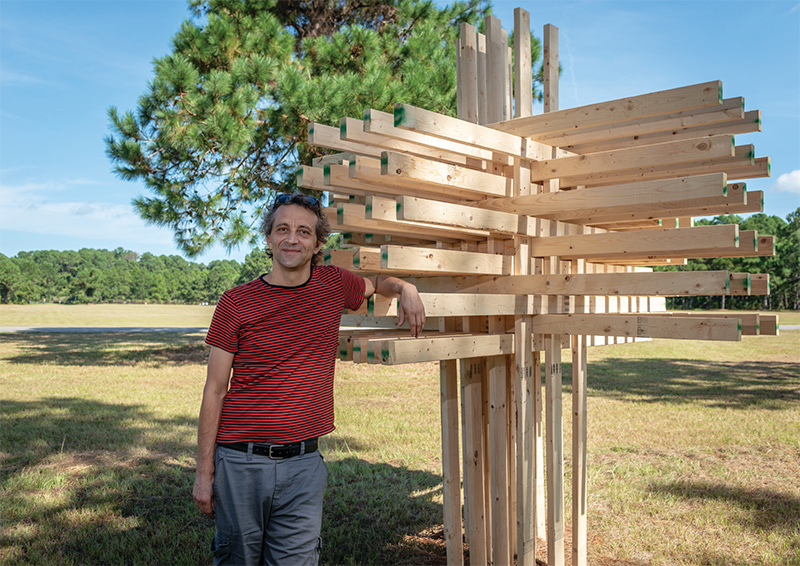 Artist Matthias Neumman used more than 100 pieces of two-by-four to create his “Basics #26,” on display at the 2018 Public Art Exhibition at the Coastal Discovery Museum on Hilton Head Island.

The work is meant to be experienced as “an abstract sculptural gesture as well as a usable and interactive spatial environment,” he said.

Neumann studied art in Germany, Italy and Canada, moving to Brooklyn in 2000 after graduating from the University of Dresden. His work has been well-received in the U.S.; one of his early pieces, “Lower Waters,” was among eight finalists chosen from 5,201 entries in a 2004 competition for art that would be displayed at the World Trade Center memorial site. He also has established his own practice, normaldesign, in New York City, handling projects in the U.S. and abroad.

His artwork continues to explore an abstracted notion of form, space and utility. His “Basics” series is based on a constructive logic of wooden slats that are configured formally as well as spatially. His work “Chaise,” also in the “Basics” group, was constructed on site as a sculptural cube that has an elevated platform serving as lounge chair. “Chaise” is similar to a previous “Basics” work titled “Bench,” initially installed at the Bridgehampton Historical Society in New York and later relocated to a private estate in East Hampton, New York.

Neumann’s work fluctuates from architecture to a wide range of artistic practices surrounding the discipline of architecture.

“My work has been situated in the interstice between architecture, art and research, with recognized work in all three fields of engagement,” Neumann said. “I have pursued a number of works concerned with the social processes that underlie creative projects in art and architecture. This interest is focused in particular on correlations between social and resource ecologies as they pertain to the built environment, as well as the formation of societal signifiers. This interest has been part of an ongoing artistic, academic and curatorial trajectory.”

Neumann’s “built projects” in New York City include temporary exhibition structures for the Spier Biennial for Contemporary Art in 2007 and Hendershot Gallery in 2010, among others.

In recent years, his focus has expanded from architecture to museum and gallery base work, as well as to social and landscape aspects of the built environment and participatory interaction. This shift has resulted in a variety of artistic collaborations and individual projects, including ongoing work at the Center for Arts and Social Practice in Mooste, Estonia, in 2011; at Galleria HIT, Bratislava, Slovakia, in 2011; and at Kunstmeile Krems in Austria in 2012. Additional commissioned and exhibited work include pieces for the People’s Library at Public Museum in Grand Rapids, Michigan, in 2013 and the National Museum for Contemporary Art in Bucharest, Romania, in 2014.

The 2018 Public Art Exhibition on Hilton Head Island features 20 large-scale sculptures created by artists from across the country. The pieces are placed along the 1-mile walking path at the Coastal Discovery Museum. The exhibit runs through Jan. 30 and is open to guests during the museum’s regular hours. Admission is free; guided tours are $10 per person and are held at 1 p.m. Fridays. For more information, call 843-689-6767 or go to www.coastaldiscovery.org.