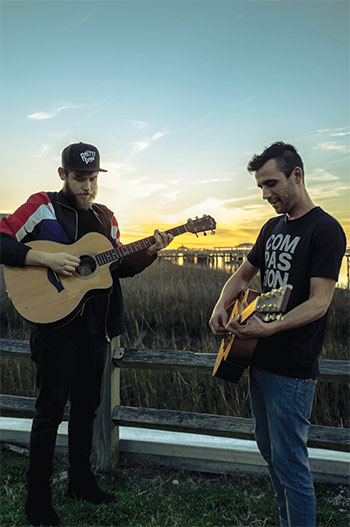 It’s pretty darn hard to believe that the musicians of Pretty Darn met just a couple of years ago. The duo has performed around the Lowcountry for almost two years, but their bond on stage seems to have been years in the making.

Raised in Philadelphia by a music-driven family, Kyle Wareham started learning to play at the age of 5. Nick Poulin, a native Hilton Head Islander, also grew up surrounded by music, often performing at open mic nights and at his church.

The two crossed paths in 2016, shortly after Wareham and his wife, Nikki, moved to the Lowcountry. Poulin happened to be in the audience when Wareham performed at Aunt Chilada’s Easy Street Café, and when Wareham started playing one of Poulin’s favorite songs, Washed by the Water’s “Need to Breathe,” he couldn’t help but join Wareham on stage. It was an instant connection and soon Pretty Darn was formed.

The message in music performed by the guitar-and-percussion performance band is simple: love and good vibes. Their harmony-heavy sound is a blend of acoustics and pop, with a little bit of folk. When they aren’t writing their own songs, Pretty Darn will cover just about anything, from Outkast to the Eagles, Cindy Lauper or Drake.

The songwriting process generally starts with Wareham and Poulin bouncing ideas off of each other, only bringing in other artists or sounds after they’ve had a chance to build a foundation together.

“We have a mainstream sound, but at the core of our music is two acoustic guitars and two vocalists,” Wareham said.

The band currently is focused on releasing its second album in November. The name is inspired by the brotherhood they found on stage — though they occasionally bicker and get frustrated with each other, it’s in the way siblings fight. Or, more specifically, “Brothers.”

To learn more about Pretty Darn, go to www.prettydarn.com.