Chris Ervin doesn’t forget where he came from. At 27, he’s moved to Rock Hill and taken his first steps down his chosen career path, but he still remembers and follows the advice of his grandfather, Hilton Head Island resident Tom Barnwell — known as a champion of the island’s Gullah culture, and for his efforts to improve health care, affordable housing, education and economic development on the island.

“My grandfather always told me that when you come up, you should always pull someone up behind you,” Ervin said.

Ervin grew up on Hilton Head, raised by people who could remember a time before the bridge. His mom was a single mother, but he never wanted for affection; thanks to extended family and key mentors, Ervin considers himself blessed — or “raised up” as he says. As a child he spent time at the Boys & Girls Club of Hilton Head Island, and he continued to volunteer with the organization throughout college, mentoring kids just as he had been mentored. 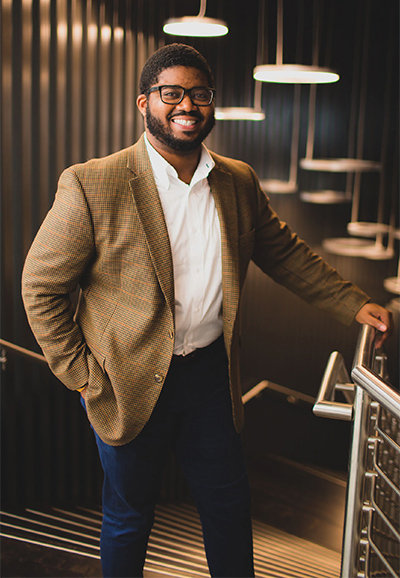 He also found a strong role model in his football coach, Tim Singleton, the former head of Strive to Excel. This Hilton Head Island High School program taught students like Ervin that academics, not physical ability, are the surest route to success.

Ervin now lives in Rock Hill and works at Red Ventures, a digital marketing and technology company that employs about 3,600 globally and helps connect home service companies with consumers at the cusp of the buying cycle by studying and leveraging vast amounts of data. As a compliance specialist, Ervin works on the Verizon account, ensuring that Verizon’s sales agents — who are often outsourced — are meeting standards set across the board and following all the rules and regulations to make sure that Verizon, Red Ventures and third-party vendors are complying with consumer protection laws.

For the past year, Ervin also has volunteered with Road to Hire, a nonprofit group created by Red Ventures CEO and co-founder Ric Alias to combat economic mobility barriers in Charlotte, which consistently ranks at bottom of the list when it comes to income inequality and upward mobility. The program offers high school graduates in the Carolinas who aren’t going to college — likely because they can’t afford it or can’t get accepted — on-the-job and in-class sales and tech training. As part of they program, they learn the professional and personal skills — like email etiquette — they need to be successful. The program is run from Red Ventures’ corporate campus, making it easy for Ervin to connect with the students, helping them hone their professional and productivity skills and navigate obstacles.

“Most importantly,” he says, “I’m someone they can talk to for support.”

Elias, a native of Puerto Rico, sets the tone at Red Ventures. The company has been rated one of Charlotte’s “Best Places to Work” for the past 10 years, but Elias knows there’s more to life. After surviving the emergency landing of Flight 1549, also known as the “Miracle on the Hudson,” he gave a widely viewed TED Talk “3 Things I Learned While My Plane Crash,” sparking a passion in creating educational opportunity and economic mobility for under-served groups. In addition to Road to Hire, he also has launched Golden Door Scholars, which creates educational and career opportunities for high-performing undocumented students.

Ervin has been inspired by his boss’s passion, also choosing to volunteer with Golden Door Scholars. The program also hit close to home for him: The student he is working with is Hilton Head native Jorge Villalva.

“Jorge is the living embodiment of never giving up,” Ervin said. “He had people tell him he’d never make it to Davidson College, but he graduated high school at the top of his class and here I am just this Sunday, moving him into his dorm. If that doesn’t say ‘I’m not taking no for an answer,’ then I don’t know what does.”

As part of the program, Ervin will help guide Villalva through the next four years of college, acting as a sounding board and mentor and helping to “pull him up behind me.”

After all, he said, he has big shoes to fill. Grandfather Tom Barnwell is “a living embodiment of history. He worked so hard so that it would get a little easier each generation,” Ervin said. “He has done so much for the Hilton Head community and I’ve taken it to heart. He is the giant whose shoulders I’ve stood on.”