On a lull between summer showers, I direct Nicole Arnold to the cylindrical tower atop Fort Greene Park, overlooking Brooklyn and toward Manhattan’s skyline beyond. Though we’ve met over video chat, Nicole’s wide smile is larger in person. She has earthy skin, auburn hair and looks out from patient eyes. We hug like old friends, even though I’m nine years older and we didn’t grow up together. We’re both Hilton Head Island expats, and we share other traits — a love for travel, an openness to strangers. It’s the real reason I reached out to Nicole after the amazing cross-country bike tour that made her famous in the Lowcountry last summer.

That epic 4,200-mile trek took Nicole, then 17, through 18 states from Oregon to Virginia and far outside her comfort zone. She succeeded despite grueling miles in the summer’s harsh temperament without a support vehicle or team.

“I had a lot of time on the saddle to think,” she said. 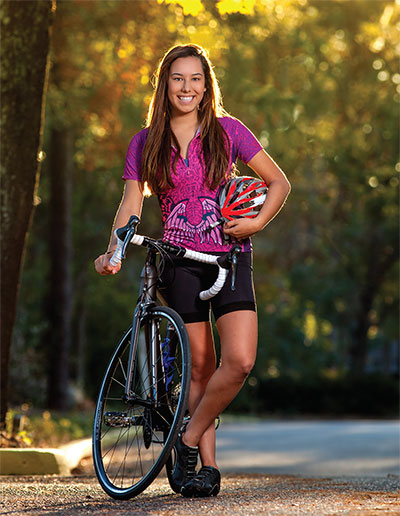 Fate favored her journey: She benefitted from the kindness of strangers and teamed up spontaneously with other women during the 72-day odyssey. The ride was in many ways the opposite of Nicole’s life up to that point, and that’s just the way she wanted it.

Nicole grew up wanting for little in Spanish Wells, going to dinner with friends and “wearing Lilly Pulitzer dresses to the Heritage golf tournament every year.” Despite the comfort and ease of her early life, she knew there was something more out there, and her ride was her first stab at finding it. Coming to New York to meet me for this interview was another.

We stroll around the park’s Revolutionary War monument, watch devoted “Rocky” enthusiasts sweat the huge set of stairs and settle down beside what must be a cork tree, its wood used in wine bottles. Nicole, who booked her flight just yesterday, almost missed takeoff when her alarm didn’t wake her — she managed to grab just one outfit and a small backpack for the Big Apple — and is clearly at ease with the fates. It doesn’t take long to realize her nonchalant approach to travel isn’t an act.

Stretched out on the park’s cool grass, Nicole recounts a recent jaunt hot on the tail of another short getaway. Having just landed at Chicago’s O’Hare airport after a European vacation with her godparents, she turned right around and booked a standby flight to Mexico City. There she couch surfed with a gay man who gave her a personal tour of the city, she tells me in her alto voice, which is slightly nasal and hard to pin to any particular region. Nicole’s mother, who is Mexican, used to enroll her in the tail end of school semesters in Querétaro over the summer, so the country has special meaning for her.

I spot a hawk perched on a building in the distance as clouds thicken overhead. The rain cuts our formal interview short — it has the power to fry an iPhone (my recording device for the evening). We head down the hill to Dick & Jane’s, a bar at Adelphi Street and DeKalb Avenue. I order an old fashioned from the groomed bartender sporting a floral button-up and a British accent I first mistake for Australian. In vain, I attempt to take notes on a napkin as Nicole professes her love for #vanlife, a phenomenon whereby people, often dressed in flannel and boasting long beards, convert vans for a life of permanent travel. It’s just the kind of crazy commitment to movement that Nicole lives for. Untethered.

Only days after completing her cross-country bike journey, Nicole settled (somewhat) in Chicago, where she enrolled in Loyola University. She was surprised to feel she didn’t fit in there, because in high school she befriended geeks and jocks alike, and even the principal. But it was mounting debt that broke the camel’s back, and Nicole decided to consider online college, enrolling in the University of Arizona the following semester. She spent winter break jet-setting in Europe with her god-family. Returning to Chicago, she landed a solid nanny job and embraced her online education. While busier than ever—she’s working 11-hour shifts four days a week, practicing yoga and studying nights— Nicole now takes many weekends to travel, whether it’s an easy stay in Denver, Colorado with family friends or a sleepless blur in Tokyo.

The sun sinks off somewhere and there’s a lull in conversation, so we decide to keep moving. The evening is still ripe with opportunity. It’s like the world slept while we danced on it. It’s a weeknight after all and New Yorkers work longer hours with longer commutes than pretty much anyone.

We share a smoke with a comedian after his set. At this point we’re both wandering as Brooklyn is huge and my mental map features large areas of grey, despite two years walking dogs in the borough. We pass several establishments that feel too sleepy and stop a couple on the street who nudge us towards Mo’s, where the doors open to one funky scene. The DJ is blasting Caribbean grooves, it’s too loud to talk and I offer her my hand but it turns out dancing scares Nicole more than skydiving.

We step out to the hushed street and I suggest a jazz show at my neighborhood bar. We hit the turnstile to the subway platform and take the Q train a couple stops south to the Prospect Park stop. “Erv’s” is a watering hole hidden on an unremarkable cul-d- sac between brick tenements under a sign that still reads, “Super Laundry.” You know it if you know it. But inside lives a microverse of free jazz only Brooklyn could foster. My friend, Aaron, blows thick melodies through his tenor saxophone, and to my surprise, Nicole sits rapt through the whole concert.

While some could easily interpret Nicole’s approach to life as naïve, it’s the ease with which she recounts her adventures that displays her uncommon maturity. I admire her from across the room. Where others may see a restless teen, I see a mature young lady steeled by a cross-country odyssey, who's taken an uncommon road, sucking the juice from life. In a lull between songs, I motion to introduce a friend but she beats me to the chase, almost elbowing me away. “Hi,” she beams, “I’m Nicole.”

Note: At 18, I left the island and never looked back. I struck out to New York City where I write and play jazz. Now I’m coming full circle, catching up with Lowcountry natives who’ve set sail for new horizons. We ask ourselves what it meant to grow up on a resort island and how far we’ve come. To nominate someone special, email editor@hiltonheadmonthly.com.