What was a 21-year-old kid from Hilton Head Island doing driving a Rolls-Royce down Manhattan’s West Side Highway?

It was 2010 and through some divine serendipity, Charles Mangan had just landed a dream job as assistant to his idol, hip-hop mogul Damon Dash, who also co-founded Roc-A-Fella Records with Jay Z. “Damon threw me the keys,” he explains, “and said, ‘Take my car to the wash.’”

Five years later, Mangan is sitting across a high top from me in a Williamsburg bar. Though we both attended Hilton Head High, my memory of him has dimmed through the years. With the ice broken over a game of Rock Em’ Sock Em’ Robots and a Dark N’ Stormy in hand, it begins to color in. I’ve heard good rumors, but I don’t know the first thing about what Charlie does.

Mangan, now 27, works in the intersection of fashion and hip-hop in the city where it all started. He’s the senior product manager at Bravado, the merchandising arm of industry behemoth Universal Music Group. While sporting a hoodie and sneakers, Mangan oversees the merchandising plans of such icons as Adele, Lady Gaga and Kanye West. Several record labels live under the UMG umbrella and Bravado signs their artists to merchandise deals that go far beyond band T-shirts into the realm of high fashion and immersive pop-up shops that border on art. It’s Mangan’s job to be the liaison between each artist’s grandest ideas and Bravado’s many teams that will tackle the nitty-gritty of who, when, where, and how.

At the bar, Mangan is sifting through text messages to show me the latest request from his client, Desiigner, a 19 year old rapper who’s sent Mangan a drawing of a skull he’s sketched on a napkin. He’s named it “Skulliigner” and he’s hoping Mangan can bring it to life on bomber jackets, hoodies, and even motorcycle gloves.

Born on Hilton Head Island on New Years of '89, Mangan’s childhood in Point Comfort was very much 'un-gated'. It was the late ’90s, and the latest rap hits could be heard blasting from Sony Walkmen on every school bus ride. Mangan elaborates, “I was always a super fan of hip-hop from the time I was real young. When I was 7, the kid next door was like, ‘Dude, check out this album.’ He was 14 so he had explicit, cool music. It was Puff Daddy and the Family, ‘No Way Out’. I heard that track ‘Been Around the World’ featuring Ma$e, and there were some Biggie Smalls verses on that right after he passed. I went to my mom and said I have to have this album, I need it today.”

Mangan would often bike across 278 with his friends to the skate park when in-line skating was all the rage. Remember, this was decade of Blockbuster and Mortal Kombat and obscenely oversized JNCO jeans. Besides house parties, the North End Cinema and the beach, a huge proportion of fun simply centered around driving. Friends would crowd into a car to blast the latest album bought from the music store at the old Mall at Shelter Cove, rapping along to the hottest track.

The summer after high school, Mangan drove to Charlotte to catch Kanye West on his Glow in the Dark tour. West had teamed up with pop-artist Takashi Murakami to create an immersive spectacle. While for most, merchandise was an afterthought, here was a music producer that had thoroughly designed the visual language of his tour from the stage design down to every T-shirt. “I didn’t realize it affected me at the time but it did,” remarks Mangan. Little did he know he’d see Kanye again, in a very different context.

Enrolled at the University of South Carolina in Columbia as a sports and entertainment major, Mangan kept his ears close to the developments in hip-hop. He felt a pull toward New York City, but wondered how he would get a foothold there. When the time came for an internship, he racked his brain. He had heard that a Hilton Head native, McKenzie Eddy, was working for his idol Damon Dash. “I was like, wow, someone from the island is the president of Damon’s label, who I grew up idolizing. It was my definition of New York City success,” Mangan says.

So Mangan made the leap to the big city, together with longtime friend Mac DeRose and fellow hip-hop enthusiast Daniel Benny. He started a podcast in his bedroom, inviting Eddy for his first interview, and naming it after a bubbling trend: “Red Shoes, Duh.” Mangan asked striking questions that showed he’d done his homework. Some time later, when he asked Eddy if Dash needed an intern, she said, no; he needed an assistant.

Moving to the city just days after finals and crashing on his cousin’s couch, Mangan got his break working for Dash. He jokes, “It was surreal that every day one of my idols would come into the office, kidding around with me, calling me ‘Bieber Bangs.’” But it wasn’t just Dash’s eccentric personality that thrilled Mangan. Dash always told Mangan that, “Music’s done.” While physical album sales continued to plummet, Dash knew merchandise had become the physical arm of the artist. “I was always into fashion,” remarks Mangan, “but Dash helped me think of the business and melding that with my passion for hip-hop. People use the word lightly, but he is a true mogul: He was doing motor oil, magazines, and a high-end fashion line, while still releasing music. He would just stroll in, light a joint and be like, ‘Let’s run through the white board.’” Mangan would stay on his cousin’s couch for a whole year before finally being able to afford his own apartment in the city. 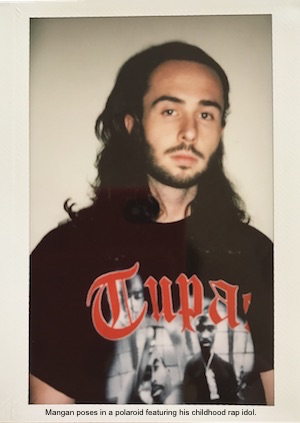 Cut to spring 2016. Mangan had landed at Universal Music Group working on artists’ web stores, but he longed for more. When a new CEO came on board at Bravado, he jumped at the chance to help shape the new direction of the company and applied to be the senior product manager. It was his opportunity to work directly with artists and lead creative initiatives on a global scale, his dream job. At 26, he was young for the position, but knew peers in the company understood his depth. “I told him, ‘I can do this,’” explains Mangan, “Just give me some projects and watch what I do.”

A year into his new role, I ask Mangan what motivates him today. Though he must ensure his artists’ profit off their merchandise, what truly drives him is the excitement he once felt surrounding his childhood idols. “I want the young kids to be like, ‘Oh this just dropped!’ and they’re camping outside the store. I want to recreate the feeling I used to have when a new album would come out and I would drive in my car with the windows down, rapping every word. My goal is to create memories.”

It’s been almost nine years since Mangan witnessed Kanye West’s might on stage. Little did he know then that he would end up in his living room for a business meeting. Mangan explains, “He got off the couch and was like, ‘Nice to meet you, I’m Kanye.’”

Author’s Note: At 18, I left the island and never looked back. Until now. Each month I follow one Lowcountry native who also set off for new horizons. We ask ourselves how far we’ve come and what it meant to grow up on a resort island. To nominate a person, email editor@hiltonheadmonthly.com.