It’s 2009, and Vijay Viswanathan is fly-fishing on a remote river in Alaska’s Togiak National Wildlife Refuge.

This is grizzly country, where glacial peaks give way to an endless sea of green scrub valleys, through which weave streams where virgin trout that have never known the taste of a steel hook die of old age. Viswanathan embarked with a small team of professional athletes and biologists carrying all they needed to live and fish for a week. “Trips like that give me the same feeling I get when skiing through fresh powder,” he said. “These are memories that will stay with me forever.”

This is an adventure beyond what most of us have ever dared. Now imagine you can’t use your legs.

Viswanathan, who became paralyzed in a climbing accident at the age of 19, has never left nature’s edge. As we talk over Skype, I can hear his girlfriend discussing the elk quarters hanging in the backyard, waiting to be processed into fresh steaks, roasts and treats for his service dog, Kane. Viswanathan shot, field-dressed and hauled the elk back from a remote part of the Colorado Rockies himself. 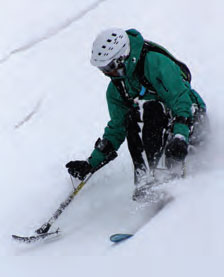 Born on Hilton Head Island in 1985 to Kumar and Penny, Viswanathan grew up to love the outdoors. Summers proved most formative, fishing for whiting and sea bass with his grandfather off Amelia Island and frying the day’s catch for dinner. As a teenager, Viswanathan spent day after day in Lowcountry swamps and pine stands, hunting deer and hogs with mentor and friend Mark Peterson. Peterson taught Viswanathan everything he knows about hunting and processing wild game. By 14, Viswanathan had practically circumnavigated the island in Outside Hilton Head’s annual Kayak for Charity race. Soon thereafter, he took a job with the company as a kayak guide, showcasing Hilton Head’s dolphins, mudflats and tidal marshes to visitors.

Viswanathan attended Hilton Head Preparatory School through ninth grade, when he transferred to Phillips Exeter Academy, one of the oldest boarding schools in the country. Located in a small town in woodsy New Hampshire, it was at Exeter that he got a taste for the mountains, becoming the president of the school’s Outing Club. During his junior year, he also enjoyed a semester at The Mountain School, which integrates organic farming into the fabric of campus life in the beautiful mountains of Vermont. After reading an article in Outside Magazine, Viswanathan realized the University of Colorado Boulder was an obvious choice for college. Sometimes dubbed the “Silicon Valley of the Rockies,” Boulder is a medium-size town less than an hour’s drive from every imaginable adventure. When in college, he took environmental studies and found himself skiing, kayaking or running trails constantly. His roommate was “a gifted climber from one of the most rugged little towns in the state,” Viswanathan said. 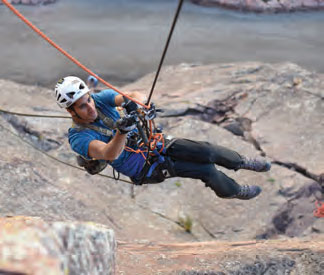 With an insatiable bug for climbing, the two were rappelling from their dormitory window when it happened: In his haste, Viswanathan missed a step in the rigging. He fell eight stories, shattering his spine. As if passing through a one-way door, Viswanathan woke to a very different life. He spent weeks in an intensive care unit, stabilizing and receiving extensive reconstructive surgery of his spine. Then doctors dropped the news: He would be paralyzed from the waist down. It wasn’t reversible. Viswanathan, whose whole being thrived on outdoor adventure, was devastated.

It was at Craig Hospital, a premier spinal cord injury center, where Viswanathan’s true healing began. He met many world-class athletes in his same condition who were doing unimaginable things using adaptive techniques and technology.

“They helped me realize that all that wasn’t over just because I couldn’t use my legs anymore,” he said.

The therapeutic recreation professionals at Craig got him on a hand cycle and later, a sit-ski, leading to his eventual mastery of backcountry skiing and deep powder.

The injury put his education on hold. Viswanathan got used to his new life through working and adaptive sports. He landed a job at Patagonia, the global outdoor outfitters. While Patagonia, which emphasizes slow growth and social responsibility, offered Viswanathan a role as brand ambassador. He traveled to New England sharing his story and the company’s mission at the boarding schools he and his sister, Natasha, had attended.

It was through Patagonia that Viswanathan met professional climber Timmy O’Neill, whose disabled brother was tackling epic mountain faces.

“We started doing these epic climbs in Yosemite and Castle Valley,” Viswanathan said. “Here were two guys who can’t use their legs who are topping out on these epic multi-day climbs.”

Inspired by his brother, O’Neill would go on to found Paradox Sports, a nonprofit group dedicated to helping disabled athletes get back outside. Viswanathan has worked closely with the group ever since, teaching many people with disabilities to climb. Paradox clients often include military veterans wounded during combat, and the challenge and teamwork required in helping each other summit a rock face reignites their warrior spirit.

In 2008, Viswanathan was driven to enter business school by the gravity of the Great Recession. He’s earning his master's degree in accounting at the University of Colorado Boulder as he pursues a career in investment management. These days, he has put adventure on the back burner. After a summer with Goldman Sachs as an intern, Viswanathan has been working at Crestone Capital, a wealth-management firm that often holds client meetings after a day of powder skiing. “I’m really lucky to work with such high-caliber professionals who also value the importance of getting outside to play,” he said.

After graduating, Viswananthan hopes to summit El Capitan, the 3,000 foot rock formation in Yosemite National Park, a huge feat by any standard.