Where does your water come from? Not long ago, a vast freshwater aquifer stretching from South Carolina’s coast through Georgia and Florida supplied the wells that quenched the Lowcountry. But aquifers can be depleted by overuse, and many wells have become compromised as salt water has seeped in where fresh water used to be. Now much of the Lowcountry’s water is sourced from the Savannah River. Thankfully, Hilton Head Island boasts a budget large enough to afford supplemental water sources, and the means to purify them.

That’s not a given on the Navajo reservation in Shiprock, New Mexico, where Lewis Stetson Rowles, a Hilton Head native working on his doctorate at the University of Texas, completed a hands-on study on water pollution caused by 40 years of uranium mining. The Navajo, whose own language played a decisive role encrypting World War II messages, mined the radioactive material for the war effort under harsh conditions for pennies on the dollar. Starting in 1944, nearly 4 million tons of uranium were mined on their lands, ending only in 1989. Besides a whole host of health effects directly related to the uranium boom, 30 percent of all Navajos lack access to drinkable water. That’s because all the surrounding groundwater is seriously contaminated by the abandoned and radioactive mines. As a result, the Navajo must rely solely on surface water sources stored for long periods in tanks. But wherever water sits still, microbes fester. 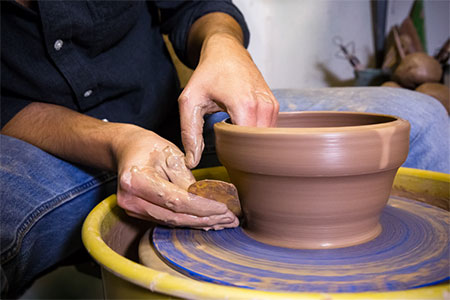 In a photo, Stetson is sitting on his pottery workbench wearing a “LOCAL Seahawk” shirt only slightly out of place in Austin, Texas. With his friendly bear smile, he’s shaping wet clay into a vase on a yellow turnstile. While he enjoys making pottery for fun, there’s more at stake. Stetson’ lifelong passion for clay sparked an idea as important as water: using nanomaterials to enhance an ancient technology —clay water filters. And his research could directly benefit communities around the world that lack safe H20.

Yeah, I know: nanomaterials. Let’s just say, they are materials the eye cannot see, and Stetson has dedicated his doctorate to this growing field of study. It turns out that silver, when added to traditional clay filters, can kill microbes, making drinking water safer. Among silver’s ancient proponents, Herodotus, often called the father of history, said that no Persian king would drink water that was not transported in silver containers, which kept water fresh for years. But nano silver, as opposed to boring old silver, has a larger surface area, thus increasing contact with microbes and vastly improving its purifying qualities. This new technology, essentially painted onto an ancient one, could prove both cost effective and easily implemented by communities.

Stetson was born in Philadelphia in 1990. But in 1995, a huge snowstorm drove his family south. But 5-year-old Stetson protested. He didn’t want to leave his friends behind. As he recalls, “I remember the first time driving over the bridge on Hilton Head the day we moved. My dad rolled down all the windows on the car over the bridge at low tide and I said, ‘It smells like poop here, why are we living here?’ Now I roll down all the windows every time I go home.”

From then on, Stetson spent much of his childhood exploring this strange new land. Living in Sea Pines, he would play in the forest preserve. He would kayak the pond in the backyard. He discovered the beach and its endless horizon. He found a family in Cub Scouts Pack 222. I, too, was a cub and we both share the memory of retreats to Fish Haul Lake, earning a whittling badge, setting up live bait lures or using our imagination at the ancient shell ring. As a Boy Scout, Stetson kayaked all over the South and backpacked as far off as New Mexico. To graduate as an Eagle Scout, he led a project sponsored by the town in which he built sand dunes for over a mile of beach. Stetson is hands-on, always shaping the environment around him. There’s no doubt he himself was shaped by the strong volunteering ethos of Hilton Head.

Stetson first learned pottery through Mr. Kaplan, the high school art teacher who he describes as, “Kinda punk. He had piercings and tattoos and I think he had a long red goatee. He cared about his students and I’m eternally grateful for him” Later, during summers home from college, Stetson would teach this craft to developmentally challenged adults at Programs for Exceptional People. He set up the whole pottery studio and taught them enough for them to sell their creations at the Farmers Market of Bluffton. “They loved it. They were so into the clay, the touch of it, the movement of it,” he said.

Another summer, he worked at a ceramics studio in Italy where, smitten by the natural beauty of Tuscany, he “almost didn’t come back.” It was there that a new ingredient was introduced to his thinking. The head of the school used to be an engineer. Back stateside in South Carolina, Stetson was writing a proposal for graduate school funding when his adviser had an epiphany, insisting Stetson should work on ceramic water filters. Drawn away from his brief Tuscan potter dreams, Lew graduated from the University of South Carolina with a degree in environmental engineering and dove into a new experience: merging the venn diagram of water contamination and traditional pottery in the Navajo nation. He was one of five students chosen to travel with his adviser to the Navajo reservation to learn about their water treatment needs. From there, Stetson developed a vision to fight poverty with pottery. Through a fellowship, he enrolled in the environmental engineering program at the University of Texas, where he’s set to finish his doctorate in 2018.

Although Stetson is open-minded when it comes to the future, he sees himself as a professor who can inspire students to improve the quality of life in developing nations. “I’m interested in working with communities in need. Many traditional water treatment methods, while effective, have not been updated in many years,” he said. “Nanomaterials provide an exciting and promising avenue in water treatment, especially in developing countries.”

And while he’s spent a lot of time working on improving life in developing countries, Stetson still hears the Lowcountry calling him home. “Back in high school, I tried so hard to get off the island,” he said. “I ended up at USC, and at USC I wanted to get even further away, because I was still close. But now I really miss it.” Stetson can definitely see himself moving back South when starting a family, “Somewhere in the distant future.” When I ask him if he still makes pottery for fun, he’s smiles—”Last night.”

More on Stetson’ pottery and work on clean water can be found at Stetsonrowles.com. He sells his wares on Etsy.