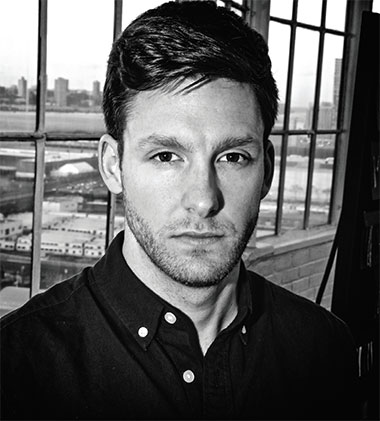 I caught up with Paul Vecchione straight off an Ironman finish in Coeur D’Alene, Idaho, a town whose name seems to say, “This isn’t Boise.”

Idaho may remind you of a giant potato, but this town, nestled upon an alpine lake near Spokane, is far from middle America. And as he tells me about the race in his downtown Manhattan apartment, Vecchione, whom I’ve known since high school — though not well — keeps impressing me.

The Ironman, to clarify, begins with a cool 2.4 mile swim, followed by a scenic 112 miles through the mountains on bike, capped off by a nice 26.2-mile run.

“That was one of the most demoralizing things,” Vecchione said of the biking portion. “As soon as you get to the top of the mountain, you could see the road go around another mountain and the people down there like ants. I was on the bike for eight hours.”

In the course of an Ironman, an athlete will burn a staggering 10,000 calories, five times that of a normal human on a normal day. Vecchione’s yearlong commitment, training in the densest of American cities on a hefty entrepreneur's schedule, involved biking 10 to 15 miles just to get out of the city via the George Washington Bridge and views like no other thanks to his route up the highway to the Palisades, a range of cliffs lining the Hudson River — a bikers dream. It all coalesced into one intense day in the clear, dry air. You can practically hear him roar through the victory photo.

Vecchione was born in California, and early childhood found him in Texas, Las Vegas and Oregon. When he was 12, his single mother, a journalist, settled the family on Hilton Head Island.

“Hilton Head was the core of my growing-up phase,” Vecchione said,

Most of this phase was spent on Old Miller Road in Bluffton, long before the town’s real estate boom so “most of it was just woods.” An act of municipal paperwork involving his soccer skills allowed Paul to attend Hilton Head High on the island. Vecchione worked full-time jobs throughout high school, specifically at The Sage Room, “the best restaurant in Hilton Head,” and as a kayak guide at Outside Hilton Head. All while playing high school soccer, studying in the International Baccalaureate program, and performing in musicals.

Toward senior year, Vecchione had joined a growing comedy posse along with my brother, Fabio, and George Metropolis, Austin Poplin, Nick Heitman, Corey Minkler and others. They would meet at the nearby Starbucks to write comedy skits. Their live sketch comedy shows were the best thing around at that time, involving our peers in live performance, practically uncensored and with only scant adult supervision, on an island sorely lacking the kind of exuberant puberty-fueled release we needed. Looking back, I can’t help thinking the school’s head of theater, Mr. Pilgreen, had a big role to play in this, and we thank you.

While he used to participate in theater when he wasn’t playing high school soccer, Vecchione spent his college years at Wofford studying economics. After graduation, he moved to Washington, D.C., to work as a program analyst for the federal government. But then he made a sudden U-turn on a road trip — pun intended — and wound up joining his brother’s thrown-together dream—to make waves in the video production world. It made a kind of sense: In his senior year at Hilton Head Island High School, Paul produced and directed his own play. He felt his brilliance behind the scenes, striking a balance between logistical prowess and creative vision very few can achieve.

“Working for the government just wasn’t for me, and I was always filming on the weekends,” he said. “I started coming up to New York a lot, and then the conversation started with my brother. I was always around it, but I never thought of it as a career. He said why don’t we do something together, and here we are 11 years later and it’s crazy. It went from me working at home alone to seven full-time employees.”

Starr Media is now in its 11th year. You’d think Vecchione could sit in the proverbial directors chair now, in some executive position delegating responsibilities, but for the most part, he still wears many hats. He gets behind the camera when he wants, which is often — ”Steady-cam is my specialty,” he said. “I actually just got my FAA drone license, so I do all our drone work as well. Today I did interviews all day and I was the director. I asked the questions, made sure it was set up how I want. I have a guy operating the camera, got sound, and I direct. That’s the fun of it now; I get to choose my role.” Vecchione recently hired friend and fellow comedy troupe member Poplin as production coordinator. His brother is now situated in Denmark and Starr Media has staff in New York, Los Angeles and Seattle. One of their top clients is Nike, for whom they filmed most recently at the Nike Unlimited campaign that took over New York City.

“We have aggressive goals. We want to keep growing. A lot of our brainstorming sessions involve creative goals as opposed to business goals,” he said of Starr Media's five-year plan. “While we know we’ll get a bigger office and hire more people, a lot of our creative goals are to get more into high-end commercial content, make a full-length documentary, use more helicopter work, stuff like that. We just had a helicopter for the Tommy Hilfiger fashion show last weekend and that was powerful.”

Vecchione’s current living arrangements reflect his unique personality and varied interests. His Wall Street high-rise is a co-living space — similar to co-working spaces like WeWork. Called WeLive, it’s no commune. WeWork started in SoHo as a curated space for startups, so many consist of fewer than four people. Itself a startup, WeWork created office environments to bring these small companies together, complete with perks like juicers, Ping-Pong, and whiskey cabinets straight out of “Mad Men.” Passing by the ship’s cabin-style bed tucked behind a sliding curtain, it’s very post-modern. It’s all very clean and new, so very unlike the pre-war apartments typical of Manhattan. Just on my way into the apartment, someone was having a beer and a business call at a standing desk on the floor’s own lobby. It’s apparent this co-living space, newly built and the first of its kind, is somewhat of a social experiment. In the hall is a building calendar complete with curated social and wellness events: “Ping-Pong Tournament, Room 314, Rec Room; Yoga for Creatives; DJ night on the patio.” Vecchione and his roommate and longtime friend, Nathan, have been living here for about seven months and don’t plan on staying when rent goes to market rates. Several books line his small “office” tucked into a corner of the living room. There’s a vintage-looking postcard-style scenic poster on the wall of the Coeur D’Alene Ironman. Draped over it is the medal. Vecchione said a queen-size bed can be conjured straight from the wall.

Behind a hotel-like curtain, Vecchione’s girlfriend, Lauren, a fashionista who works in high-end women’s shoes, sits quiet as a mouse on the couch watching TV. I can’t help but think Vecchione has got it all. Not in some tired, cliche way. What I mean is that he gets to be the guinea pig for a clean new apartment on Wall Street when so many of us 20-somethings are living in thrown-together circumstances deep into Brooklyn. In many ways, that sums up something greater: Vecchione, through no shortage of focus and work, plus a sprinkle of luck, has gathered quite a life around himself. He seems neither stressed nor idle, and very much immersed in what he has going. Vecchione’s life seems whole.

Find out more about Paul and his company, visit StarrMedia.Tv.