Ancient lore and modern research suggest early Polynesians migrated to North America following the seasonal flight patterns of the Golden Plover. One generation would row their boats as far as they could keep up with the birds. Then they noted their location and came home. The next year, they would row out to last year’s endpoint, waiting this time with a head start. Over hundreds of years and many generations, through birds and stars, the Polynesians found Hawaii. 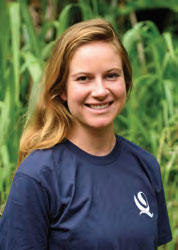 “I’m doing a lava boat tour tomorrow,” Kristen Sutton mentions casually. “They’ll pull you right up against the edge of the island as it’s falling into the ocean and creating new land.” It may be an island, but Hawaii is just about the furthest thing from what we all knew growing up on Hilton Head Island. To travel there from Hilton Head requires 15 hours, give or take, two stopovers, and no birds. Sutton and I are connecting via Skype; I’m pushing my cat off the table, she’s just in from a movie and takes her phone out to the porch. I try to put myself there, jealously. I’ve been walking dogs in Brooklyn all day in the middle of a crushing heat wave no broken fire hydrant can cure. Hawaii is a cruel mirage to a thirsty mind.

Sutton, a few weeks into 27, is rocking a Harold’s Diner hat her dad gifted her. “He sent me a bumper sticker, too,” she says, “because that was our place.” Sutton hasn’t returned to Hilton Head in over a year. A Hilton Head native, she now lives in Hilo, the main town of “The Big Island.” Larger than all the other Hawaiian islands combined, it’s home to the state’s highest peak and the world’s largest volcano, Mauna Kea and Mauna Loa, respectively. With the clearest night sky on earth, Mauna Kea, sitting well above cloud level, hosts the world’s premier space observatories. I try to think of the highest point on Hilton Head, probably the ridge lining a golfing green.

Sutton lives and works at Pacific Quest, a horticulture therapy program for troubled adolescents. She moved there about a year ago, following her inner bird. Just weeks after completing her master’s degree in chemical mental health counseling at Georgia Southern University, Sutton found herself living at camps surrounded by gardens, working eight days on with the kids, eight days off exploring her new island home. She first visited Hawaii with her mom on her 21st birthday, and fell in love with its tropical beauty. As part of her internship during college, she worked at the campus counseling center. “It was a really great training opportunity, but we did therapy in a room without windows,” she said. “It was the saddest room I ever saw, very uncomfortable. There was something missing.” 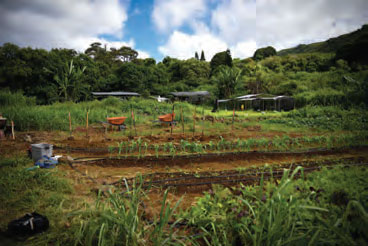 A Google search introduced Sutton to wilderness therapy. At a fork in the road with a longtime boyfriend making moves on his own journey and with job offers both in Statesboro and on Hilton Head, she chose none of the above.

“I really enjoyed my life in Statesboro. But the idea felt stagnant to me. So I applied to Pacific Quest, which was my dream job,” she said. “It had all the elements of the things I wanted in a job and what I believed therapeutically was effective. I was fascinated with the idea of getting as far away as possible.”

Landing her dream job gave Sutton the resources and intensity to dive into a new setting, as the organization set her up to live and work as a field guide for a year, where she progressed through several roles from support to wellness to lead guide. It was in this last role that she led the colorful Huli Ka’e ceremony, transitioning the teens from adolescence to adulthood.

“It was like moving to an entirely different culture,” she said. “I still feel very new after a year.”

While it looks in photos to be a summer camp, Pacific Quest is a serious program equipped with the expertise of any clinical in-patient therapy — it’s the setting and the gardening that really set it apart. The program accepts teens ages 13 to 17 who are struggling with all kinds of issues, from ADHD to video game addiction to suicidal tendencies.

The teens grow through various stages of the program, borrowed from traditional Hawaiian words and values, each with its own set of rules, privileges and location. After progressing through Nalu (“reflection of the sun off a wave”), Kuleana (“personal responsibility”), and Ohana (“family”), a participant will finally reach Huli Ka’e, a rite of passage ritual that roughly translates to “searching the edge”. Students must face themselves in a challenge whose details must remain a secret.

“It's an experience all the students are working towards and value highly, even though they don't know anything about it before they embark on their journey,” Sutton said.

After completing Huli Ka’e, students return to a ceremony that “symbolizes crossing the threshold, severance and rebirth. Rebirth takes place at a secluded beach on the southern tip of the island where students are asked to answer the question, ‘Who are you?’” Sutton said. “The ceremonial aspects to Pacific Quest are my favorite part, along with the wilderness aspect. I've chopped down trees with students, had mud fights, stargazed, hiked across a volcano, and swam with sea turtles with these kids. It's been truly magical.”

A year in, Sutton has graduated to the position of support therapist. She’s not living out in the garden encampments anymore, but visits three times a week for therapy days. “They very much want to see their therapist,” she said. “Then I have an extra day where I can float around helping with group therapy, art therapy or any other alternative therapies.” The other two days, she’s at her home office, assuring parents who are very anxious to know how their children are doing so far away.

Staff are encouraged experience their own Huli Ka’e ceremonies so that they can empathize with the students. Sutton’s intent statement reads (or yells), "I am a balanced and beautiful wanderer. Calm and connected to the universe — I am enough.”

Editor’s Note: In this column, Hilton Head Island native Marco Frey catches up with young Hilton Head Island and Bluffton natives who are now making their mark elsewhere. The column highlights their blossoming lives and how their hometown helped shape who they are today. To nominate a person, email editor@hiltonheadmonthly.com.