“Dad! I want to play on the trampoline!” yells one of his four kids. “No, not this second” replies Brandon Runyan, and then turns to me: “This is the chaos of my life.” A toddler’s shriek pierces through my computer speakers. We’re on video chat and Isla, age 7, reminds us, “You’ve been on this interview for minutes!” She wants dad to continue their bike-riding lessons. Runyan, still in his scrubs, calmly answers each question, even if delayed by constant, if cute, interruptions. Most mornings, he sneaks out at 5 a.m. for CrossFit. That’s before the kids wake up and must be shepherded through the morning’s tasks.

Runyan’s open face and cool demeanor betray his wonderfully chaotic home life. Just hitting 40, Runyan has cemented a career as a radiologist in Daytona Beach, Florida, where he is a medical director representing his local hospital in a large Orlando-based radiology group. He was instrumental in developing his hospital’s breast cancer imaging program, modernizing techniques and improving bedside manner to fight the stigma of such an intimate disease. Being a diagnostic radiologist involves studying all sorts of medical imaging and then conveying its importance to a wide audience. It’s the quietest part of his day. Runyan has a way of seeing things in balance. He likes the set hours and no-strings-attached vacation time that being a doctor allows. It means more time for family, a value that could only come from an organic childhood in a special place. 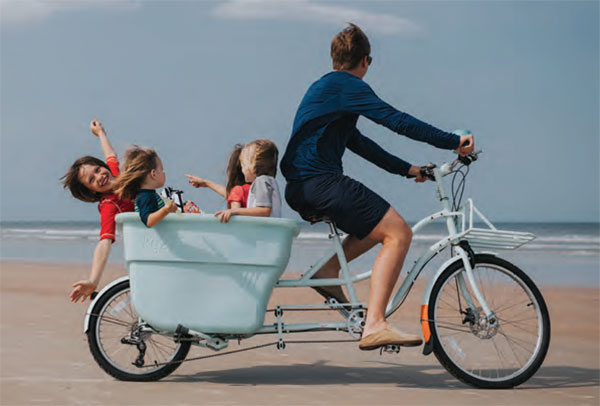 Runyan, an adopted son of Hilton Head Island, may not have been born here but was embraced at 7 by its simple pleasures, moving to the island from Ohio in the mid-1980s with his mother, Debi Lynes, to be with his stepfather, Mike Lynes, “a true islander,” who brought Runyan’s childhood into the realm of water, fish, sun and sand. His mother worked as an interior designer and started a local TV show, while his stepfather established a family construction and home inspection business, steady to this day. “Mom and Mike worked hard doing whatever it took to give us a good life, and my sister and I learned by example. We didn’t have a lot, but we had a great lifestyle,” Runyan says. “We had a wealth of experience from those visiting and staying in our home that we might not have had sheltered behind a gate. I had a Southern grandmother and Andy Pitts, who played music with Jevon and Gavin Daly, was my Southern cousin. Granny, who was usually in charge of watching us, had fried oysters and fried chicken for dinner all the time.”

Together, Pitts and Runyan grew up exploring the woods and marshes of Point Comfort, situated deep at the end of the one road that led into Hilton Head before the Cross Island Expressway was constructed. At that time, there was no public middle school on Hilton Head, and the elementary school was just a collection of trailers. To get to McCracken Middle School in Bluffton was a 14-mile drive. There was more raw undeveloped land to explore as a kid, no digital distraction, and no penciled-in after-school schedule. 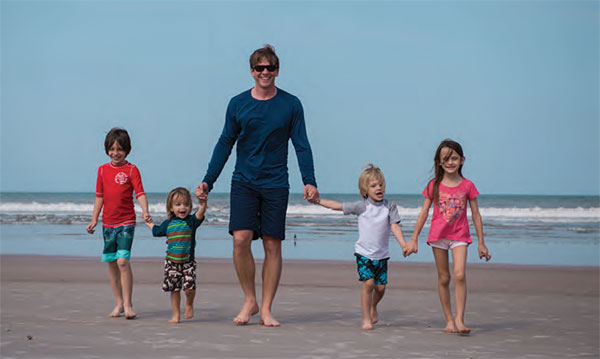 “Mike, a longtime islander, was into fishing and took us out on boats, took us out windsurfing, got us into the water. Coming from Ohio, all of a sudden we had this really fun lifestyle. It was great growing up on Hilton Head back in the day,” Runyan says.

Growing up close in age to his sister, Kiki, created a cordial rivalry. They went through school together, each successful in different ways. “If Jim Alberto was one of my great teachers, hers was his wife, Carol Alberto,” Runyan says. “And if my great teacher in high school was Kathy Weatherhead, then hers was Tina Webb. Kathy was a great hands-on biology teacher. It’s hard to forget dissecting a cat.” 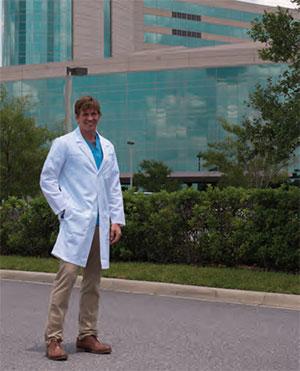 While his sister was very focused and studied constantly, Runywan succeeded off-the-cuff, or made it look that way. “Working hard was so much of what I was that I never really felt like I was working that hard,” he says, as he gets off the sofa to attend to his toddler’s ice cream demands, holding up the phone camera with one hand and putting a few dishes away with the other. Kiki, following her nature, would eventually become a tenure-track professor in environmental science and resource management at California State University, Channel Islands.

At Miami University in Ohio, Runyan met his wife, Catherine. After undergrad, she moved down to Boca Raton, Florida, to finish a master’s degree in archeology at Florida Atlantic University. On Hilton Head that summer, before joining her, Runyan knew he had to nail the MCATs, the admissions test for medical school. He would go to the public library every day at 7 a.m. and cram until 6 p.m. He went on to study at the Medical University of South Carolina in Charleston, and completed his residency at the Mayo Clinic in Florida. After a detour at University of Wisconsin-Madison for musculoskeletal radiology, an opportunity as a diagnostic radiologist brought him back to the Sunshine State, where he lives with his family today. “Where I live in Ormond Beach, it’s along the mid-east coast of Florida where we still have live oaks in our yard that keep me connected to Carolinas.”

Runyan enjoys bringing his kids to visit Point Comfort, where his parents still live. It hasn’t changed much since he grew up there and he can watch his kids can enjoy a similar playtime he experienced growing up.At the end of our videochat, I express a little self-doubt. “I’m not sure I can synthesize all this into a pretty article.”Runyan jokes, “What? Is this too much for your brain?” It’s an ease in him that could only have come from an island lifestyle to which his stepdad had the keys. “Mike was and is very level-headed. He always knew how deep the water was.”