As I enter Think Coffee, Chris Schembra is joking with the table to his left, a couple I assume he has brought along.

It turns out that in the short time he’s waited, Schembra has befriended a theater producer — by no small coincidence. I’ve done a bit of homework. Schembra is himself a producer of the five-time Emmy Award-winning one-man play “The Little Flower,” and he is an investor in two Broadway shows. I’ve scanned his LinkedIn profile and watched his segment on Bravo’s “The Singles Project” and, more importantly, his Times Square Light-a-Candle charity flash mob. 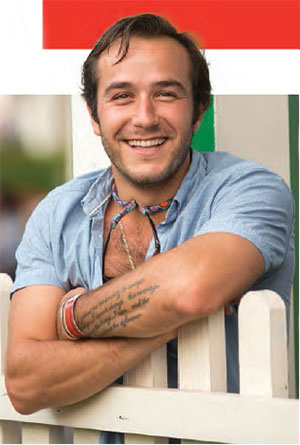 Schembra is wearing a garnet polo and gray Patagonia corduroys over worn Nike chucks. His puffy jacket reads “NOLS Patagonia,” a nod to his time spent in Chile at the National Outdoor Leadership School. His looks give away his Jewish Italian roots. He has dashing hair and a broad, open face that breaks easily into smile. His manner is above all welcoming, and his words flow as easily as the wine we start on. His eyes dart eagerly into every strange face with a warmth that is infectious.

After goodbyes with the new friends he’s made, he turns to me. He asks me to summarize my vision. I pause a moment. “I guess it would be to help people slow down, to feel sensual through music.” He uses this to launch into the ambitious optimism I’ve come to admire in him. “Well Marco, that’s what we’re here in New York to do, but we wouldn’t have that passion for the good things in life if it wasn’t for Hilton Head Island. People move to Hilton Head for a balanced life. People go to work, then they get out of work and they do civic, nice things, and then they enjoy their weekends, and I think they do it very symbiotically. There’s a reason why we’re a world-class destination resort—we’re inhabited by world-class people who are living a happy life. We were lucky to grow up there.”

I hadn’t thought of Hilton Head for quite some time. I left the nest for Charleston at 18 and moved to New York City last year, at the age of 25. As a restless young man with a passion for jazz and a hunger to see more, I left Hilton Head eagerly. But here we are, in the West Village of Manhattan, and Schembra is casting our hometown in a new light. He spent his 20s as a kayak instructor at Outside Hilton Head and living on a boat for a summer. After his adventures in Patagonia, he moved back to Hilton Head, earned a captain’s license, and began filming his island lifestyle.

But it took a strong push from the grandmother of Rachel and Kathleen Blum to convince him to try the big-city experience. “I moved with a suitcase. I was living on my buddy’s couch in Brooklyn, no college degree, no job lined up, just arrived here. I was figuring out stuff left and right until one day I called my dad and said, ‘I think I want to be an actor.’ I gave his friend Tony Lo Bianco a call and Tony’s had a magnificently successful career, and he said why don’t you come over.” From there on, Lo Bianco took Schembra under his wing and put him to work as an assistant. Months later, Schembra was reading a script Lo Bianco had written, a one-man play featuring Fiorello La Guardia, the former mayor of New York City. “I read it in one night and I came back the next day and said we should do this play and he said, ‘Alright, I’ll act it, you produce it.’” They set a date, chose a theater, promoted it, filled the seats.  Opening night’s success led to a life on tour, and more than 70 performances around the country to date.

Over a bed of lentils and a glass of Montepulciano, Schembra discusses one of his other passions: “Where I really spend most of my time these days is with Save a Child’s Heart,” a global humanitarian effort dedicated to children born with congenital heart defects. In the viral video he’s produced, more than 400 people light a candle simultaneously with 3,000 onlookers in Times Square for the cause. “That’s where Hilton Head comes into play the most. Community and philanthropy.” He describes the island’s unique combination of generous retirees and eager youth. It’s certainly a quality of Hilton Head I had always taken for granted. At Hilton Head Preparatory School, Schembra was the team captain for Relay for Life and took part in Habitat for Humanity. He also credits his mother, Carol, who he recalls working tirelessly for charitable causes throughout his childhood.

What is he up to now? Schembra is investing his time and passion for veterans’ causes, especially mental health issues. He’s just completed a big campaign, “Just a Common Soldier,” to give tribute and thank veterans for their service. 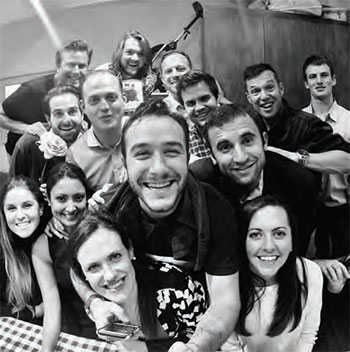 The campaign has reached more than 14 million people and ultimately aims to help lower the suicide and depression rate among veterans suffering from post-traumatic stress disorder. Schembra’s respect for veterans stems from his interest in Hilton Head’s Civil War history, growing up near Parris Island, and long conversations with his grandfather, a veteran of World War Two.

Towards the end of dinner, Schembra asks me what I’m doing on the 12th. He invites me to one of his somewhat legendary dinners in which he not only hosts 20 new guests each week, but cooks the three-course meal himself — which says about as much about Chris Schembra as I ever could. How could I say no?