When Steve Jobs stood on a stage way back in October 2001, few could imagine that the product he was launching would have a lasting impact on our lives.

The Apple iPod, a device that could hold “1,000 songs in your pocket,” was revealed.

Yes, there were other MP3 devices on the market, but they were large and didn’t have the capacity of the iPod. 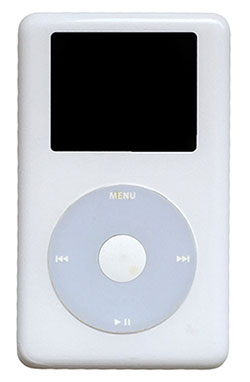 Despite the $399 price tag, the iPod became a hit, and by July 2004 more than 100 million songs had been downloaded from the iTunes store.

I received my first iPod the year it was released for my birthday. Back then you had to use iTunes on your computer to download your songs and arrange your playlists.

I loved playlists. It was like having instant access to every mixed tape you had ever made or received.

Long car drive? Press the click wheel a few times, and suddenly my “Road Trip” playlist kicked on. Just like my old mixed-tape collection, I had playlists for everything: cleaning playlist, workout playlist, relaxing playlist.

Over the years Apple came out with other iPods: the mini, the nano, the touch; and I had a couple of different versions, but my heart still was with the classic. It had little frills, a long battery life and went everywhere with me. Until it didn’t.

Eventually my iPhone took over as my main music device. It was easier — I already was carrying it with me and could download songs directly. I found myself using my iPod less, and eventually it ended up in my desk drawer with my external hard drive and a handful of thumb drives. I’m not even sure what, if anything, are on most of those things, but I keep holding on to them “in case.”

Each of my boys received iPod touches when they were tweens, and they loved them until they received their phones. And then they too put their iPods into their desk drawers where they remain, one with a cracked screen.

Even though we don’t use our iPods anymore, it still came as a shock when after 20 years Apple announced it was retiring the last iPod model (Touch). “What? Everyone loves the iPod!” were my initial thoughts. Then again, when was the last time I used mine?

I use carplay when I’m driving. If I want music while cleaning, I just tell Alexa what to play.

Part of me is sad that my sons won’t fully understand how the iPod changed how we lived. The iPod was the foundation the iPhone and smart phones were built upon. I am excited that they get to experience things I never imagined at their age.

Things that used to seem as science fiction are now everyday objects. That a single device we carry in our pocket acts like a phone, camera, flashlight, record player, measuring tape, calculator and lets us check our email and pay our credit card continues to amaze me.

Perhaps this is what my grandparents thought when television replaced the radio as the evening entertainment. I wonder what technology today’s teens will be nostalgic for in 20 years, and what new technological advances they will get to experience in their lives that seem like science fiction now. I hope those new advances make the world a better place.

In the meantime, for today at least I’ll be pulling put my old iPod, plugging in the 30-pin charger cord and rocking like it’s 2001 again.