Sept. 11, 2001, will always be with me. The horrific images, the panicked phone calls, the uncertainty. The feeling of helplessness.

Twenty years ago this month, terrorists attacked the United States. The attack at the World Trade Center led to the deaths of 2,606 people.

I was living in New York in 2001, about 20 miles from the World Trade Center.

The memories of that day remain indelible.

Seeing video of the destruction of areas I’d visited was stunning. Hearing from friends about their dashes to safety was gut-wrenching. 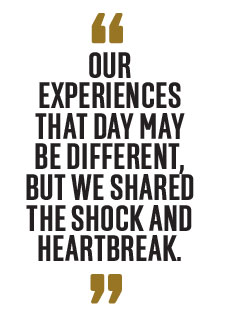 Waiting to hear from family who worked near the site was unnerving.

After the chaos, what I remember most — and recall often — was the quiet.

It was eerie in the days following the attack to not hear planes flying, to see empty skies.

There were unspoken exchanges and understood somber glances among strangers. The usual obnoxious honking of cars was kept to a minimum.

We were mostly in our houses, watching, mourning the loss of lives, hoping futilely for the rescue of survivors. We worried about what would come next.

Those tense days of quiet are reflected at the National September 11 Memorial & Museum in Manhattan, where I visited a few years ago.

Years after moving out of New York I made it a point to return and visit the memorial that has been visited by thousands since it opened in 2011.

Inscriptions on the pools are filled with thousands of names of those who died on Sept. 11 and during the 1993 terrorist attacks: mothers and fathers, sons and daughters, firefighters and cops.

White roses representing the birthdays of those lost were placed along the memorial.

The loudest sound came from the rush of the memorial’s water.

We stood in silence remembering the pain of Sept. 11. It was a sobering experience.

The recollections now, years later, remain somber, but there is comfort in knowing the lives lost were honored.

Twenty years and our distance in the Lowcountry from New York City can make it easy to overlook this year’s anniversary.

Don’t let it. Twenty years ago our country was attacked, lives were lost, and wars were fought.

The day deserves a moment of reflection.

There will be Sept. 11 anniversary ceremonies nationally and in the Lowcountry, but you don’t have to attend a ceremony to commemorate the event. Our experiences that day may be different, but we shared the shock and heartbreak.

Twenty years later we can unite in remembering the tragic day and the lives lost.