If you read any news story about “fake news” in the past four years, you then came across the phrase “media literacy” and the calls for it to be included in public education.

For more than 20 years, I have been teaching media literacy (as an education consultant), but it wasn’t until former President Trump declared the news media as fake that people started paying attention.

Media literacy means thinking critically about what you consume from the media. Thinking critically involves asking questions, but it appears that in this information age, most people accept what they read without question, including our students.

In 1999, a study I conducted found elements of media literacy in all 50 states’ teaching standards. But in 2021, media literacy is difficult to find, mostly because 42 states have now adopted new standards, called Common Core. South Carolina is not one of those states and analyzing media messages is not on the radar screens of most educators, but it should be. 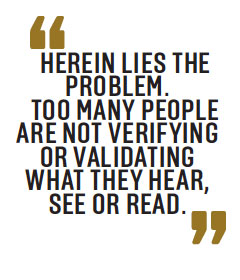 A recent RAND Corporation study found that 92 percent of the secondary teachers surveyed said “students must learn to critically evaluate information for credibility and bias—it’s a crucial citizenship skill.”

Verify What You Read: Have you seen the image on the internet of students seated at an art museum, looking at their phones?

It was sent to me by a school librarian who was appalled that the students were oblivious to a famous Rembrandt hanging on the wall behind them. I challenged his conclusion.

Wasn’t it possible, I wrote, that these students were engaged and not distracted? I searched the web where I found that the Amsterdam art museum created an app and installed benches, making it easier for students to answer questions posed about the artwork.

Herein lies the problem. Too many people are not verifying or validating what they hear, see or read.

Question the media you consume: I encourage my audiences to consider some simple media literacy questions, including:

Consider the advice produced by the NPR series “On The Media.” Recommended guidelines to identifying fake news include:

How do we guarantee that the new generation of students has the necessary skills to think critically about what they read? One answer is to ensure that the public schools make teaching media literacy a priority.

During the 2021 S.C. legislative session in January, a media literacy bill was introduced by Richland Rep. Seth Rose. If passed, it would require the State Department of Education to ensure that media literacy is included in all K-12 instruction.

There is much work to be done. Until we make media literacy education a priority, we will continue to create a media illiterate citizenry.