The recent death of Ruth Bader Ginsburg, the Supreme Court justice who devoted her life to women’s right, has brought attention to how far we have come and how far we have yet to go.

It’s not hard to see that all around the world, including within our own borders, women are not seen as equal to me, they are not treated fairly, and they are not given the same chances as their male counterparts. 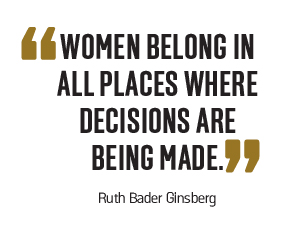 The case to give women the same access to power as men is simple: They are just as capable as men. End of argument.

Of course, there are gender differences, which often are complementary, which makes it even more compelling to ensure women continue to contribute to build a better society.

I never understood the phrase: “the weaker sex.” As a youth soccer coach every year, we had random boys and girls on the team and the girls proved to be just as essential for winning the season as the boys.

In the 35 years of history of this publication, there have been both females and males at the helm, in charge of editorial, design and sales. They equally succeeded in their pursuit and several of our team members are mothers, successfully multi-tasking, proving that pursuing a professional career and being a mother can be compatible.

But in order to unlock this important force, we have to go beyond such steps as passing laws prohibiting discrimination and ensuring equal prize money for male and female athletic champions. These are important milestones, but not the whole story.

Lasting, meaningful change starts with a fundamentally different cultural attitude towards women. And for this to happen, we need strong men. This might sound counterintuitive, but if men are self-assured in their roles and capabilities, they can open their minds to women’s power rather than oppress them.

History is full of women who have made important contributions, yet when we examine the composition of board rooms, the Supreme Court and most other fields in politics, business, science and the arts, we see a male-dominated world.

And what good has it done for us?

Qualities such as empathy and intuition, long considered generally stronger in females, may be crucial in this critical time for civilization when we need to fight disease and mitigate the risks of climate change in a rapid and unwavering way in order to reverse the destruction of the natural world.

New ideas, like moving from a linear economy based on growth and the accumulation of wealth to a circular economy that is restorative and regenerative by design cannot come soon enough. Having more women in top positions of power would give us a better chance to see the possibilities and achieve these goals in a pragmatic way.

The men in charge for centuries have brought us wars, nuclear arsenals, oppression, and governments and companies driven by greed to take advantage of consumers and disregard the environment.

It’s time for a change.

[PHOTO OF MARC BY MIKE RITTERBECK]