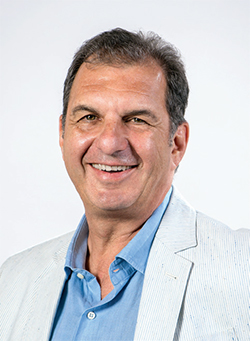 Not that long ago the answer was obvious. But today, with the advent of face recognition technology coupled with artificial intelligence, it’s not that clear anymore.

Cameras can recognize our face, match it to an existing database, and then match all the personal data that has been collected about us (a lot more than we dare to admit). In the past we typically would only have given the Department of Motor Vehicles the permission to take a picture of our face in order to issue a driver’s license. But now any number of corporations will do the same without our permission in order to benefit from the data.

We are about to pass the threshold where machines control us versus us controlling machines. Instead of consumers with free choices, we will become mere data sets that have a predictable life-time value that can and will be squeezed for all it can give.

The only difference between Orwell’s “1984” vision and today’s reality is that instead of the state controlling all its citizens, it is a handful of companies that do it, and we don’t have to work underground in dark mines, we can happily sit on our couches, play video games and have fast food delivered to us.

THE PROMISE OF PERSONAL FREEDOM IS A FUNDAMENTAL VALUE EMBEDDED IN THE UNITED STATES CONSTITUTION. UNLESS WE ARE GUARANTEED PERSONAL DATA SOVEREIGNTY, IT WILL BE LOST FOREVER.

We may seem worse off in Orwell’s vision but in both versions we have given up our privacy, our dignity and ultimately the ability to make meaningful personal decisions. Unless the law protects us and declares that it us up to us to decide if we want to keep our own personal data sovereignty, we might not be able to be an individual, be ourselves in the traditional sense any longer.

The situation is alarming enough that Brad Smith, President of Microsoft is calling for federal regulations: “Facial recognition will require the public and private sectors alike to step up—and to act.”

As data becomes more valuable than product, we are shifting from a product and service-based economy to an information-based system. The resulting dilemma is that companies fail to consider the privacy rights of consumers and monitor them constantly through automated systems. This is a challenge for which our society is ill prepared, in part because of the speed by which technological advancements are happening and because we have proven that we are willing to give up our privacy for more convenience. An ad-free Facebook model could be had if its user were willing to pay a few $ per month for a subscription, in return blocking access to our personal data. Giving up our face to Facebook is merely another step in the wrong direction, but one that at least symbolically seems more personal than the other blunders that we have already committed.

A WORD OF EXPLANATION ABOUT AI: THERE IS ACTUALLY NO SUCH THING AS ARTIFICIAL INTELLIGENCE. IT JUST SOUNDS MORE INTERESTING THAN IF WE WOULD REFER TO IT AS “ADVANCED MACHINE LEARNING CAPABILITIES”. COMPUTERS CAN PROCESS VAST QUANTITIES OF DATA ALMOST INSTANTLY AND THE COST OF DATA STORAGE HAS BECOME NEGLIGIBLE. THIS GIVES MACHINES THE ABILITY TO RECOGNIZE, IDENTIFY AND MATCH SIMILAR DATA SETS, WHICH MAKE THEM APPEAR AS “SMART”.